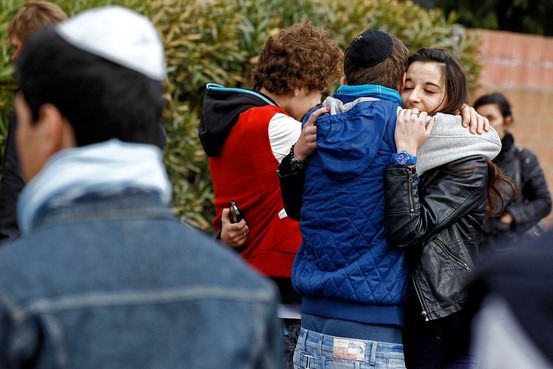 A manhunt was under way in this southern French city for a lone gunman who opened fire on a Jewish school Monday, killing four people including a father and his two sons, with a weapon used in two similar attacks in recent days.

The unidentified gunman fled on a powerful scooter after the school shooting, which followed two separate attacks last week on soldiers in the region that left three dead.

Police determined that the same .45-caliber handgun was used in all three attacks and are trying to identify the shooter using closed-circuit television footage captured near the school that shows the scooter’s license plate number, a spokeswoman for the Paris prosecutor’s office said. Prosecutors are also trying to trace an email exchange that may have led to a meeting between one of the slain soldiers and his killer.

The killings have sparked widespread horror in France, prompting candidates in this spring’s presidential elections to put their campaigns temporarily on hold as a mark of respect to the victims. President Nicolas Sarkozy and his main challenger, the Socialist Party’s François Hollande, both traveled to the school on Monday.

Thousands of people assembled in central Paris on Monday evening for a silent march in memory of the victims, wire services and French media reported.

Law-enforcement officials described a scene of terror at the private Ozar Hatorah school in Toulouse, where the gunman opened fire on a group of children and their parents just before 8 a.m. local time, as the school’s doors were opening for the day. He killed a 30-year-old teacher and his two sons, ages 6 and 3, as well as the 8-year-old daughter of Jacob Monsonego, the school’s director. A 17-year-old boy was hospitalized in Toulouse in critical condition.

The Israeli foreign ministry identified the slain teacher as Rabbi Jonathan Sandler, an Israeli citizen, and named his sons as Arye and Gabriel.

Officials said the killer hunted down his targets outside and inside the school. “He got off his scooter and while outside the establishment, he shot at everything in front of him, children and adults,” said Toulouse prosecutor Michel Valet. “Children were followed into the school.” The killer carried two firearms, including the .45-caliber handgun, Mr. Valet said.

Nicole Yardeni, head of the local council of French Jewish institutions, said she had reviewed some of the video footage of the school shooting before it was handed to police. “A man gets off a motorbike and starts shooting. People fall down; he goes into the schoolyard, and grabs a small girl. He puts a gun to her head and he shoots,” Ms. Yardeni said.

The shooting could become an electoral issue in a country that boasts the largest Jewish community in Europe—though it represents less than 1% of the French population—and where about 5% of the population is Muslim, according to polling company Ifop. The Jewish community voted en masse for Mr. Sarkozy in 2007, in particular because of his pro-Israel positions, Ifop said.

Mr. Sarkozy said the shooting marked the first inside a school in France, calling it a tragedy that has left the nation overwhelmed. “These three small children asked only to live, but a barbarous madman, an assassin, cut them down,” he said. “All means will be deployed to stop this criminal.” Schools in France will hold a minute’s silence on Tuesday in memory of the children killed, he said.

Mr. Sarkozy dispatched his interior minister and defense minister to Toulouse to coordinate the investigation and said they would stay “as long as necessary.” The Interior Ministry ordered security tightened around all religious buildings in France, including schools, churches, mosques and synagogues, while Mr. Sarkozy raised the terror alert level in Toulouse and the surrounding area to the highest level of “scarlet” from “red.”

The Socialist Party said Mr. Hollande was suspending his campaign as a mark of respect for the victims. “I had to be here to express my solidarity with the town of Toulouse and say that it is not a Jewish school which has been affected and a city but the whole of France,” Mr. Hollande said.

Mourners left bouquets of white flowers in front of the school on Monday, directly below a tin fence bearing the impact of six bullets. A dozen police officers in bulletproof jackets guarded the school, while police presence in the city was generally increased. “It’s important for people to feel safe,” said France’s Grand Rabbi Gilles Bernheim. The school is closed, but about 150 relatives of the victims and community members were keeping vigil inside the school and planned to pray through the night.

“We are angry that something like this could happen,” said Claude Kilian, a retired man living in the neighborhood. “I didn’t expect such hate crimes to happen in France.”

International condemnation of the killings was widespread. Israeli Prime Minister Benjamin Netanyahu said it was too early to determine who was behind the shooting—unlike the reaction to last month’s bombings in India and Thailand, which Israel quickly accused Iran of organizing. “But it’s definitely impossible to rule out that this is an operation motivated by murderous and violent anti-Semitism,” he said.

The Vatican called the attack “heinous.” In Washington, White House spokesman Tommy Vietor said the U.S. joined the French government in “condemning this unprovoked and outrageous act of violence.”

The Paris prosecutor’s office, which has national jurisdiction in antiterrorism cases, said it has opened an investigation into the three attacks. The spokeswoman for the office said the attacks potentially rank as terrorism because they appeared premeditated and aimed at threatening the public.

Last week, a gunman in Montauban, a city near Toulouse, shot three soldiers in front of an ATM close to their barracks, leaving two dead before fleeing on a scooter. A gunman on a scooter in Toulouse had killed another soldier a few days earlier.

The three soldiers killed were of North African descent, Interior Ministry spokesman Pierre-Henry Brandet said. “There’s the same geographical area, the scooter with a powerful engine and the cold-blooded killer,” he said.