CONOR DOUGHERTY and MIRIAM JORDAN, The Wall Street Journal, May 17, 2012

For the first time in U.S. history, whites of European ancestry account for less than half of newborn children, marking a demographic tipping point that is already changing the nation’s politics, economy and workforce.

Among the roughly four million children born in the U.S. between July 2010 and July 2011, 50.4% belonged to a racial or ethnic group that in previous generations would have classified them as minorities, up from 48.6% in the same period two years earlier, the Census Bureau said Thursday. That was the first 12-month stretch in which non-Hispanic white children accounted for less than half the country’s births. 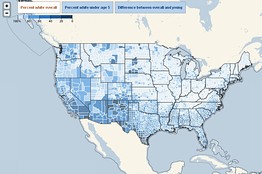 The 2008 election of Barack Obama as America’s first black president was in some ways emblematic of the nation’s changing face. But as the population evolves toward a more-varied mix that includes fast-growing Asian and Hispanic populations, the black/white divide that characterized the civil-rights movement has itself become a relic.

William H. Frey, a demographer at the Brookings Institution, says African-Americans are the largest minority among adults over 50. But for anyone younger—including the newborns forming America’s first “majority minority” generation—Hispanics are the second-largest population group after whites of European descent.

“It’s a major turning point for American society,” he said. “We’re moving from a largely white and black population to one which is much more diverse and is a big contrast from what most baby boomers grew up with.”

Thursday’s census data also show that immigration isn’t the main driving force behind America’s growing diversity. In fact, the shift has as much to do with the aging white population as the growth in other groups. The total number of births declined between July 2010 and July 2011, compared with the same period two years earlier. But among all ethnic groups, non-Hispanic whites saw births decline just over 10%, more than any other group. 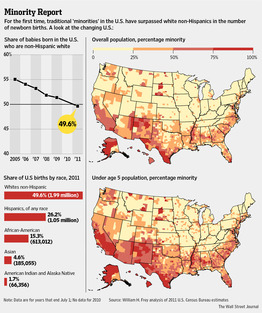 Overall, the white population is barely above the point where births exceed deaths. Last year 1,025 non-Hispanic white children were born for every 1,000 who died, compared with a ratio of 3,940 births to 1,000 deaths for all other ethnic groups, according to Kenneth Johnson, senior demographer at the University of New Hampshire’s Carsey Institute.

Data for 2010 show Hispanic women give birth to 2.4 babies on average, compared with 1.8 babies for non-Hispanic whites, according to the Pew Hispanic Center. But the rapid growth of the Hispanic population isn’t just due to higher birthrates: Minority women also are younger on average, so more of them are in childbearing years.

The growing diversity has spurred debate—and concerns about issues such as immigration and affirmative action in education. For the economy, the rapidly growing nonwhite population gives America a significant workforce advantage over other developed countries. In Japan and parts of Europe, the total population is shrinking as deaths outnumber births. The U.S. is on track to avoid that fate thanks to a higher birthrate as well as immigration.

Few places illustrate this better than America’s heartland, where many rural areas are locked in a cycle of “natural decrease,” which happens when more people die than are born. But in pockets of Kansas, Iowa and Nebraska, Hispanics are reviving small towns that would otherwise be in decline. 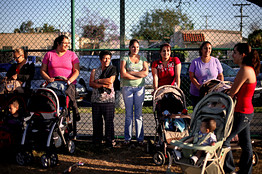 In Nebraska, the Latino population jumped 77% between 2000 and 2010, when the state’s population overall grew 7%. In 1990, 11.5% of the population under the age of 5 consisted of minorities. In the ’90s, most of the growth in the Hispanic population was due to in-migration, but today births are the driving force, said David Drozd, research coordinator at the Center for Public Affairs Research at the University of Nebraska in Omaha. In-migration refers to people moving into a place from other countries and states, rather than people born to those already there.

Schuyler, Neb., a rural town of 6,211 settled by Irish and German immigrants, is now 65% Hispanic, up from 41% in 2000 and just 4% in 1990. Many Hispanics work at the local meatpacking plant, the largest employer. Others run mom-and-popshops or restaurants on downtown’s B Street, where storefronts had stood vacant for years. On a recent spring day, mothers pushing strollers were ubiquitous, said city administrator Mary Peschel, whose office faces the street.

Not far from Schuyler, at Columbus Community Hospital, between half and 60% of the babies born in the past two years were Hispanic, according to head nurse Diane Ward. “Twenty years ago, a Hispanic baby was rare. Now it’s the norm,” she said. The hospital has interpreters around the clock, Ms. Ward said, but demand has eased as more Mexican and Guatemalan immigrants learn English.

The school district has grown 1,800 students from 1,300 in the last decade, largely because of the Hispanic influx. About 90% of the students in the building that houses kindergarten to third graders are Hispanic, said Superintendent Robin Stevens, and six of every 10 students in Schuyler’s public high school are Hispanic.