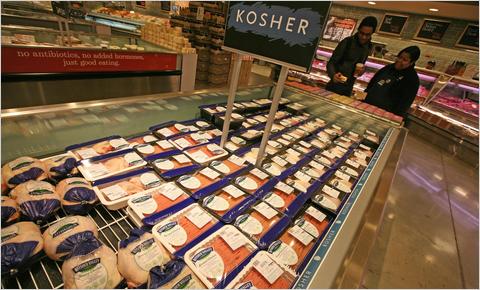 An ancient diet has become one of the hottest new food trends.

A growing number of supermarket shoppers are going kosher — not for religious reasons, but because they are convinced the foods are safer and better for health.

Kosher foods, which must meet a number of dietary and processing rules to comply with traditional Jewish law, are the fastest growing ethnic cuisine, reports the market research firm Mintel. Sales of kosher foods reached $12.5 billion in 2008, an increase of 64 percent since 2003.

Reflecting the growing interest, Manischewitz, a major kosher food company, held a kosher cook off last month in Manhattan. It featured five chefs from around the country who prepared dishes with the most traditional of kosher-recipe ingredients: chicken broth.

Four of the chefs do not keep kosher but look for certain kosher products in the supermarket. One of those is Julie DeMatteo, a 68-year-old grandmother from Clementon, N.J., who is not Jewish but regularly shops for kosher foods. She believes they are more closely monitored during their processing and “more consistent in taste,” she said.

“We see consumers looking for a convergence of ethics, supervision and quality to general health and wellness,” said David Yale, chief executive of Manischewitz.

Joe Regenstein, a professor of food science at Cornell University who specializes in kosher laws, notes that kosher food restrictions were created for religious reasons, not to produce healthier or safer food. Although some of the kosher laws related to ingredients and preparation may have potential health advantages, there’s no evidence to show that kosher food products are healthier or safer than those from traditional food companies, he said.

But the strict rules for producing and certifying kosher food products may result in closer scrutiny of food safety issues. For instance, independent organizations such as the Orthodox Union are paid by food companies to send trained personnel to factories to ensure that all of the restrictions of kosher laws are met. The extra monitoring typically means that kosher products are produced more slowly than other foods.

In general, kosher food has to be carefully watched throughout its processing and preparation. Grains, packaged vegetables, fruits and similar products are thoroughly inspected for any trace of non-kosher substances like insects. Because kosher laws prohibit the mixing of meat and dairy, all kosher dairy products are processed separately from any meat product. No shellfish is allowed, and all fish, like anything that is kosher, must be processed with utensils that have not been in contact with anything non-kosher.

“The extra eyes and slower speeds probably allow the government inspectors to do a better job,” Dr. Regenstein said. “The fact that a kosher company is meeting a lot of rules and subjected to random inspections is something of real value. Although most consumers don’t really understand it in that detail.”

Certifying a meat as kosher is even more complicated. First, only certain animals are allowed to be eaten: no pigs, rodents or birds of prey, for example. Additionally, every cow, chicken or other animal that is certified as kosher has to be killed and butchered in a particular way.

During this process, called “shechting,” each animal is killed quickly by a trained individual. Some believe this form of butchering is more humane and less painful than traditional slaughterhouse practices. Every butchered animal is closely inspected for signs of disease, and any animal that may have been sick is not used.

Certain non-kosher animal parts, like the tail, the sciatic nerve and some fats generally found in the hindquarters, are separated and sold to non-kosher meat-processing companies. And because all kosher meats are thoroughly salted, they may be less likely to carry E. coli and salmonella, experts say, though no studies have been done to confirm this speculation.

A kosher symbol on a food can also be particularly helpful for those with strict dietary requirements or allergies to a certain food. Kosher foods are a good option for consumers with allergies to shellfish, for example. A vegetarian can buy a kosher product labeled “pareve” and be certain that it contains no trace of milk or meat. Muslims and Seventh Day Adventists, who also follow strict diets, also are regular buyers of kosher foods.

Ultimately, the best part of buying kosher products is that it may help you know what is — and more importantly, what’s not — in your food