Prime Minister Benjamin Netanyahu said Wednesday that people who dismiss the Iranian threat as a whim or an exaggeration “have learnt nothing from the Holocaust.”

Speaking at the state ceremony for Holocaust Remembrance Day at the Warsaw Ghetto Square in Jerusalem’s Yad Vashem Museum, Netanyahu said: “I believe in our ability to defend.”

“A nuclear Iran is an existential threat on the State of Israel and also on the rest of the world,” Netanyahu said. “We have an obligation to prevent Iran from obtaining nuclear weapons. It’s the world’s obligation, but above all it is our obligation. 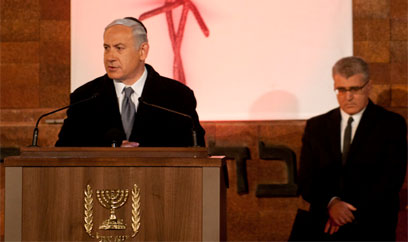 Addressing criticism following his proclamations of Iran as an existential threat, the prime minister said: “I hope the day comes when we learn of calls for Israel’s annihilation in history classes only, and not in daily media reports. But that day is not here yet. The Iranian regime is openly calling for our destruction and working frantically for the development of nuclear weapons as a means to that end.

“I know that some people don’t appreciate me speaking such uncomfortable truths. They would rather we not talk about Iran as a nuclear threat, they claim that, though it may be true, this statement serves to sow panic and fear.” 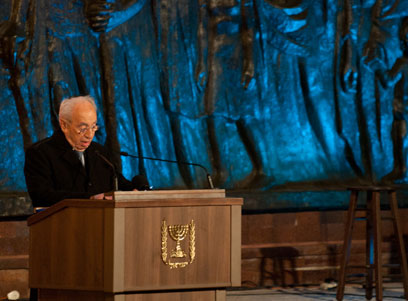 President Shimon Peres also spoke at the ceremony. “The Nazi dictator’s crematoriums created a global disaster and a Holocaust for my people,” he said. “Holocaust deniers are denying the actions of their predecessors to cover up for their own actions. The lie of denial will not extinguish the fire of the inferno.”

Peres addressed the tragic accident in Mount Herzl in which Sec.-Lt. Hila Bezaleli, 20, was killed when a lighting fixture collapsed. He offered his condolences to the officer’s family and to that of a Combat Engineering Corps soldier who died at an IDF base apparently due to a heart defect earlier on Wednesday.

“On my way here, the bright lights of Jerusalem changed into the flames that consumed my people. This is us, this is our nation. A nation bearing a great light; a nation bearing fathomless orphanhood.”

“Iran stands at the center of the threat to Israel. It is the terror hub. It presents a threat to world peace. One should not underestimate Israel’s unconcealed and hidden capabilities to deal with this threat.”

Gantz: IDF is a wall of protection
Speaking at the Holocaust Remembrance Day ceremony at Kibbutz Tel Yitzhak, IDF Chief of Staff Lieutenant General Benny Gantz said, “Tonight, 70 years later, standing in the land of Israel I look before me and see the embodiment of the strength of the Jewish nation. The leitmotif that no enemy has ever been able to cut off.”

Gantz said that the IDF draws it strength from the determination of Holocaust survivors and that never again shall the Jewish people stand defenseless.

“We are the arm of steel that will respond to any attempt to hurt us with a harsh blow. We are the people’s wall of protection,” he said.