Our World: Is Israeli society unraveling?

We have far more that unites us than separates us. If we focus on this, there is no force either within or without our society that can defeat us. 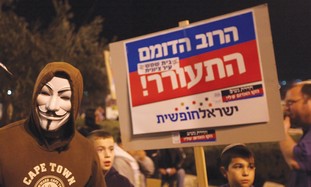 Unemployment is at record lows. At a time of global recession, the Israeli economy is growing steadily.

Israeli Jewish women have the highest fertility rate in the Western world with an average of three children per woman. Education levels have risen dramatically across the board over the past decade with dozens of private colleges opening their doors to more and more sectors of the population.

And as secular Jews become more religious, both the national religious and ultra-Orthodox sectors are becoming increasingly integrated in nonreligious neighborhoods and institutions. Ultra-Orthodox conscription rates have increased seven-fold in the past four years. In 2010, 50 percent of ultra-Orthodox male highschool graduates were conscripted.

While this is still below the general conscription rate of 75% among male 18-year-olds, the rapid rise in ultra- Orthodox military service is a revolutionary development for the sector.

With military service comes entrée to the job market. The trend towards employment integration was blazed by ultra-Orthodox women. Over the past decade, ultra-Orthodox women have matriculated en masse in vocational schools that have trained them in hi-tech and other marketable professions and so enabled them to raise their families out of poverty.

These ultra-Orthodox women, who are now being followed by their IDF veteran husbands, are part of a general trend that has seen women fully integrated in almost every sector of society and the economy. The fact that women make up the senior leadership echelons in both business and government is not a fluke. Rather it is a product of the largely egalitarian nature of Israeli society.

True, as is the case everywhere, Israeli women suffer from male chauvinism.

And like the rest of the world, Israel has its share of sexual abusers, rapists, and criminal and social misogynists. But imperfection does not detract from the fact that women in Israel are free, educated, empowered and advancing on all fronts.

Modern Orthodox women are taking on expanded roles in religious councils, synagogues, religious courts and other bodies. Soldiers from the national religious sector remain overrepresented in all IDF combat units and in the officer corps.

Israel’s growing social cohesion and prosperity is all the more notable as we witness neighboring states aflame with rebellion and revolution, extremist Islamist forces voted to power from Morocco to Egypt and economic forecasts promising mass privation.

And in the Age of Obama, with cleavages between liberals and conservatives growing ever wider in America, and with the future of the European Union hanging in the balance as the euro zone teeters on the edge of an abyss, the fact that Israeli society is becoming increasingly fortified is simply extraordinary.

In light of these integrationist trends, the media circus in recent weeks that has portrayed Israeli society as frayed through and through has been startling. With women in Israel presented as underprivileged victims, national religious youth presented as terrorists and the ultra-Orthodox community presented as a gang of misogynist, violent crazies set to transform Israel – in the words of US Secretary of State Hillary Clinton – into another Iran, an average news consumer can be forgiven for wondering how he missed his country’s demise.

What explains this sudden flood of gloom and doom stories? Certainly it is true that in a highly competitive news environment, media coverage tends to over represent marginal social forces. Sensational stories make for banner headlines. And it is at the margins of society that a reporter is most likely to find sensational stories.

So it is that when reporters wish to push a socialist agenda, they descend on urban slums and talk to people hanging out on the street doing nothing. As a rule, these stories will not feature visits to vocational training schools that are educating poor people out of poverty.

Just as poor, uneducated single mothers in Lod can be depended on to blame their troubles on an insensitive government, so groups of ultra- Orthodox extremists in Beit Shemesh, whose own communities decry them, can be trusted to treat nonreligious women poorly.

None of this is to say that we should stand by and allow poor single moms and their children to go hungry or that we should accept abuse of women by ultra-Orthodox bullies. The former is an issue for social services. The latter is an issue for law enforcement bodies. And to the extent that these institutions are failing in their missions, they should be required to improve their performance.

But just the majority of single mothers, who are not impoverished, don’t deserve to be placed in the victim column, so, too, the majority of ultra-Orthodox Israelis do not deserve to have their reputation besmirched because of the bad behavior of a small, vocal and easily provoked minority.

ALL OF this brings us to the issue at hand. Stories highlighting the deviant behaviors of marginal social forces tend to be simplistic and misleading, and to serve identifiable political forces. And so, with our national discourse suddenly dominated by stories describing the demise of Israeli democracy, women’s rights and the rule of law at the hands of modern and ultra- Orthodox Jews, we need to consider who benefits from the stories.

It is notable that the seam lines being opened by all of the stories, which are again, about deviations from the norm of Israel’s social cohesion, all fall within the governing coalition. Stories of “Jewish terrorists” set the security hawks against the ideological hawks. They set the likes of Defense Minister Ehud Barak and his supporters against the Jewish communities in Judea and Samaria and their representatives in the Likud, Israel Beiteinu, Habayit Hayehudi and other coalition parties.

Stories about ultra-Orthodox misogynists make it politically costly for the Likud and Israel Beiteinu to sit in the same government as ultra- Orthodox parties such as Shas and United Torah Judaism. They also serve to weaken Shas among its nonultra- Orthodox voters. The fact that the ultra-Orthodox bus lines were inaugurated with the support of the Kadima government in 2007 is beside the point. It is the Likud that is now being blamed for their existence.

The current media-supported outcries against the national religious and ultra-Orthodox sectors follow the pattern of last summer’s social justice protests in Tel Aviv. The purpose of those protests was to discredit the government in the eyes of working class voters and young people.

The current protests also follow in the footsteps of the protests of 1998 and 1999 that brought down Prime Minister Binyamin Netanyahu’s first government. Those protests pitted his Russian immigrant coalition members against Shas. They pitted secular Israelis against his ultra-Orthodox coalition members. They alienated young voters from his leadership.

The cleavages wrought in Netanyahu’s coalition made members of his own party as well as his coalition partners fear the electoral cost of maintaining their membership in his government. And so one by one, they bolted his government until it finally fell.

Notably, many of the same forces – from the New Israel Fund to various political consultants who work for the Israeli Left to European NGOs – who were active in the protests in 1999 and in the social justice protests last summer are also playing a role in the current protests. The New Israel Fund raised NIS 200,000 in “emergency funds” to pay for buses to transport protesters to Beit Shemesh last week.

Last summer, Israel’s New Left movement led by leftist political consultant Eldad Yaniv took credit for organizing the anti-free market protests. Yaniv and his colleagues were assisted in conceptualizing the protests by US Democratic pollster Stanley Greenberg, who was also the architect of the social protests in 1998-99.

Indications of how the political Left has been impacted by the current wave of demonstrations are mixed. A Shvakim Panorama poll from last week, which posited the existence of a new anti-religious party led by popular television personality Yair Lapid and a new anti-capitalist Sephardic party led by former Shas leader Arye Deri, indicated that the Left as a whole has been strengthened against the Right. While Kadima would lose most of its Knesset seats to Lapid’s party, it is Deri who would be the undoing of the Right.

The poll claimed that Deri, who since his release from prison has strengthened his bonafides as a secular- friendly political dove, would win seven mandates. Shas would drop from its current 11 seats to five. Deri’s rise would decrease the political Right in all its various forms from its current 67-seat majority in the 120 seat Knesset to a minority of 57.

The media have trumpeted this poll as the first harbinger of spring for Israel’s political Left. And certainly it provides some reason for celebration among leftist political forces. Like the protests in the late 1990s, and like last summer’s anti-capitalist protests, the current batch of anti-religious campaigns serves to turn Israeli against Israeli by feeding on and inflaming sectoral envies and insecurities. And given their success, we can certainly expect them to continue.

For the benefit of society as a whole, we must hope that the basic health and cohesion of Israeli society that has grown so miraculously over the past decade will prevail in the current contest. We have far more that unites us than separates us. If we focus on this, there is no force either within or without our society that can defeat us.

But if we give in to the forces of contention and chaos, we risk endangering everything we hold dear.