Parenting by Gays More Common in the South, Census Shows 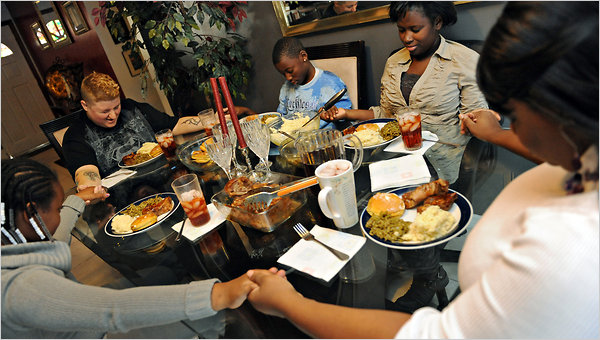 JACKSONVILLE, Fla. — Being gay in this Southern city was once a lonely existence. Most people kept their sexuality to themselves, and they were reminded of the dangers of being openly gay when a gay church was bombed in the 1980s. These days, there are eight churches that openly welcome gay worshipers. One even caters to couples with children.

Sarah Beth Glicksteen for The New York Times
Reginald Maffett, 14, at services at St. Luke’s Community Church, which he attends with his mother and her partner.
The changes may seem surprising for a city where churches that have long condemned homosexuality remain a powerful force. But as demographers sift through recent data releases from the Census Bureau, they have found that Jacksonville is home to one of the biggest populations of gay parents in the country.

In addition, the data show, child rearing among same-sex couples is more common in the South than in any other region of the country, according to Gary Gates, a demographer at the University of California, Los Angeles. Gay couples in Southern states like Arkansas, Louisiana, Mississippi and Texas are more likely to be raising children than their counterparts on the West Coast, in New York and in New England.

The pattern, identified by Mr. Gates, is also notable because the families in this region defy the stereotype of a mainstream gay America that is white, affluent, urban and living in the Northeast or on the West Coast.

“We’re starting to see that the gay community is very diverse,” said Bob Witeck, chief executive of Witeck-Combs Communications, which helped market the census to gay people. “We’re not all rich white guys.”

Black or Latino gay couples are twice as likely as whites to be raising children, according to Mr. Gates, who used data from a Census Bureau sampling known as the American Community Survey. They are also more likely than their white counterparts to be struggling economically.

Experts offer theories for the pattern. A large number of gay couples, possibly a majority, entered into their current relationship after first having children with partners in heterosexual relationships, Mr. Gates said. That seemed to be the case for many blacks and Latinos in Jacksonville, for whom church disapproval weighed heavily.

“People grew up in church, so a lot of us lived in shame,” said Darlene Maffett, 43, a Jacksonville resident, who had two children in eight years of marriage before coming out in 2002. “What did we do? We wandered around lost. We married men, and then couldn’t understand why every night we had a headache.”

Jacksonville was a magnet for Ms. Maffett even before she moved here. While its gay residents remained largely hidden, it had a gay-friendly church. In 2003, she spent her Sundays driving 90 minutes each way to attend from the town where she worked as a school bus driver.

Ms. Maffett appreciated the safety of the church in Jacksonville. Her father was a Baptist preacher, and her former husband was a member of the Church of Christ, so she knew how unwelcoming some churches could be for gays. Even so, she felt little connection to the gay congregation in Jacksonville — mostly white, male and childless.

“The pastors were all white guys,” said Ms. Maffett, who is black. “They were nice to us, but we weren’t really feeling that they knew how to cater to kids.”

Then she met Valerie Williams, a customer service worker with a sunny personality and a booming voice. Ms. Williams, 33, had been part of the city’s gay community for years, and when the first African-American, gay-friendly church opened in 2007, she thought it needed to go one step further.

“People were looking to do stuff with their kids, and they had no place to go,” she said.

So last summer, Ms. Williams became pastor of St. Luke’s Community Church, one of the oldest gay-friendly churches in the city, and immediately set up a youth program. Attendance by the mixed-race congregation swelled to more than 90 from 25 in just a few months.

“All of a sudden you started seeing all of these women coming out,” Ms. Maffett said. “All of them had children.”

In 2009, the Census Bureau estimated that there were 581,000 same-sex couples in the United States, Mr. Gates said; the bureau does not count gay singles.

About a third of lesbians are parents, and a fifth of gay men are. Advocacy groups argue that their children are some of society’s most vulnerable, with fewer legal protections and less health insurance than children of heterosexual parents.

Even so, their ranks have been mostly left out of national policy debates, because the Census Bureau did not conduct its first preliminary count of same-sex couples until 1990. This year, the bureau will count married same-sex partners for the first time.

“We don’t know a lot about this group,” Mr. Gates said. “Their story has not been told.”

About 32 percent of gay couples in Jacksonville are raising children, Mr. Gates said, citing the 2009 Census data, second only to San Antonio, where the rate is about 34 percent.

Some gay parents here say that family life can be complicated. Cynthia, the mother of a talkative 9-year-old, can be herself at her daughter’s cheerleading practice, because it is far from their home. But at her daughter’s school, she tells no one that she is gay, because her partner, Monique, teaches there.

Their daughter, they said, ends up with a mixed message at school.

“We tell her, ‘Be honest, don’t lie, but keep this in the closet,’ ” said Monique, who asked that the couple’s last names not be used to protect her privacy at work, “It gets confusing for her.”

Ms. Williams confronts those troubles directly with a program called Youth Power Hour, a kind of group counseling session for children of gay parents. This month, the group of about 20 young people discussed their problems after a free spaghetti dinner cooked by one of the adult moderators.

“This girl at school is always bullying me,” said a 9-year-old named Diantra.

Ms. Williams responded, her voice filling the room: “Remember what we said? Tell an adult.”

Cynthia’s daughter, also part of the group, said the sense of community it provided helped her.

“It feels good to be around people who don’t just have moms and dads,” she said, pulling her braids nervously. “I like it because I’m not alone anymore.”

Married same-sex parents face legal hurdles. Florida does not recognize same-sex marriage, and its domestic partnership recognition, while growing, is an uneven patchwork, and still leaves many spouses uninsured.

Even when employers agree to cover domestic partners, those couples pay higher taxes, because without federal recognition of their status, health coverage is considered income and is taxable. Until recently, Florida was one of a handful of states that expressly prohibited adoption by gay couples.

But money is often a more immediate problem.

Ty Francis, a bank customer-service worker here with a sharp sense of humor, supports six children together with her partner, Rosalyn Cooley, a health care worker.

“I’m one check away from being on welfare,” Ms. Francis said.

But that kind of financial difficulty does not dampen enthusiasm for coaxing along acceptance in this conservative city of more than 800,000 people. A recent billboard supporting gay and lesbian youth drew no public scorn or boycotts, and gay pride parades have been held for several years.

Ms. Williams compares the community’s efforts to the struggles of the civil rights movement.

“Slowly but surely, all this will pass,” she said. “I truly believe that.”
(Tags: Gay, Adoption, Diversity)