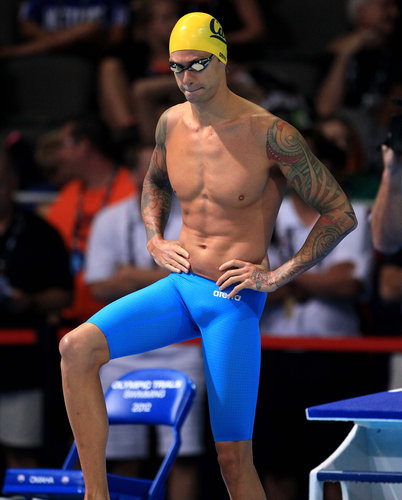 The black Imagine Swimming jacket, worn over a gold California swimming and diving T-shirt, covered Anthony Ervin’s heavily tattooed arms. The glasses and the wispy facial stubble gave Ervin more the look of a graduate student, which he is, than of the other facets of his personality — guitarist, swimming instructor, thoughtful individualist who, to his own surprise and wonder, finds himself back in the pool after years away.

Uninterested in defending his 2000 Olympic gold medal in the 50-meter freestyle, a burned-out Ervin quit swimming in 2003 at age 22.

A circuitous route back to competition in 2006 took Ervin to New York City, where he spent parts of the next four years living in Brooklyn, jamming with a rock band and teaching children at Imagine, a TriBeCa-based learn-to-swim school co-founded by a former Cal teammate, Lars Merseburg.

Ervin was not ready to swim again when he returned to the Bay Area in 2010. But he thinks the enthusiasm of the children he taught in New York, and those he met later at a club in Oakland, helped him rediscover what first attracted him to swimming.

That eventually brought him back to the Olympic trials, where this week he entered the 50- and 100-meter freestyle events, the usual double for a sprinter. Ervin finished 13th in the 100 semifinals Thursday night and did not advance to the final. In the 50, his specialty, the preliminaries and the semifinals will be held Saturday, with the final on Sunday night.

“Seeing them committed, gradually making changes and improving, and then having fun with it, I don’t know,” Ervin said of the children he taught. “I guess it kind of blew on some embers that had grown really, really cold, and eventually grew into a fire.”

Ervin rose to international prominence as a 19-year-old in 2000. He tied his friend Gary Hall Jr. for the 50 freestyle gold medal in Sydney while beating the two-time defending champion Alexander Popov, who finished sixth. Ervin added a silver in 4×100-meter freestyle relay and followed it in 2001 with world championships in the 50 and 100 freestyle events.

As the first swimmer of African-American heritage to make a United States Olympic team, Irvin was both a pioneer and a prodigy. His father is also part American Indian, while his mother is Jewish.

But he never embraced the discipline required of an elite swimmer. Even before high school, Ervin said, he considered quitting.

“I had been dealing with burnout for a number of years,” he said. “There was always another reason to keep going.”

Eventually, Ervin ran out of reasons. “It was time for me to kind of reclaim some of the things that I had sacrificed — some of my freedoms, some of my independence, some of my abilities to go ahead and learn things I had to give up,” he said. “So I spent a few years doing that.”

Ervin had never been to New York City. Inspired by Doug Stern, a triathlon swimming coach he met through Hall and briefly worked for, Ervin called Merseburg, who was a senior swimmer at Cal when Ervin was a freshman. Merseburg, a drummer, told Ervin he could play with his band and suggested he earn money by teaching a few hours a week at his school.

Merseburg said Ervin never walked the pool deck like a typical instructor, instead favoring jeans and white T-shirts that exposed his tattoos. An out-of-shape Ervin was so skinny that some parents wondered if he swam competitively at all. By then Ervin had sold his gold medal on eBay for $17,101, which he donated to the tsunami relief effort.

“He was a little eccentric,” Merseburg said in a telephone interview. “He has an air about him. I don’t know how to describe his aura. He doesn’t really want to be categorized.”

After staying with friends for a while, Ervin found his own place in the Bushwick neighborhood of Brooklyn. He said he related best with playfully confident children who liked to race.

“That’s where I felt I really thrived as an educator at the time,” he said. “That’s where I felt the most comfortable being, because that was the place where I had the constant tug of war with myself, between being competitive and trying to enjoy myself.”

After a year, Ervin re-enrolled at Cal. He took classes part time, flying to New York between semesters, until finishing his English degree in 2010. Once he began his graduate studies in sport, culture and education, he hooked on as an instructor with the Oakland Undercurrent program, where the former Cal swimmers Spencer Hawkins and Rolandus Gimbutis coach.

“What drove him away from the sport was all the attention, and with that, the expectations,” Hawkins said in a telephone interview. “Too many people were telling him what to do. He was like, ‘I want to do what I want to do.’ Reconnecting with the kids triggered something, too.”

It took watching Cal win the N.C.A.A. men’s swimming championship in Minneapolis in March 2011 — its first title in 31 years — to finally move Ervin toward competing again. Near the end of the year, he asked the Cal women’s coach, Teri McKeever, if he could train with her team.

In January he swam the 50 free in 22.27 seconds at the Austin Grand Prix to finish third, behind Cal’s Nathan Adrian, the favorite at this week’s Olympic trials. Two months later he lowered his time to 22.24 at a Grand Prix event in Indianapolis. In June, Ervin won the 50 free at the Santa Clara Grand Prix, with 20 children from the Undercurrent program cheering on the man they know as Coach Tony.

He has not touched his winning Olympic time of 21.80. But at 31, Ervin appears fast enough to contend this week: he was seeded seventh in the 50 freestyle.

“It’s kind of a process,” said Merseburg, who along with the Imagine co-founder Casey Barrett planned to be here Thursday to watch Ervin swim. “You don’t just suddenly wake up and feel better about swimming. Tony did really well in the freedom we created for him. He rediscovered it at the end, something he was so good at. He rediscovered it by teaching it.”

“But in the vicissitudes of life, I guess we’re always thrown for a loop at some point or other. I’m just going to go with it.”