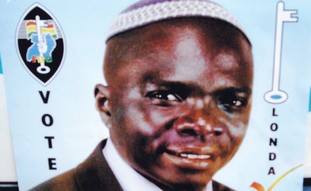 KAMPALA – Uganda’s only rabbi is contesting the outcome of Friday’s election to parliament, saying the vote was rigged.

According to results released on Saturday, Rabbi Gershom Sizomu came second with 14,872 votes in the race for MP for Bungokho North constituency in the Mbale District, trailing behind the winner, Yahaya Gudoi, from the ruling NRM party with 16,744 votes.

Sizomu told The Jerusalem Post yesterday that his party agents were beaten and chased away from more than eight polling stations in the constituency in the east of Uganda.

Standing for the opposition Forum for Democratic Change party, preelection polls had the fourth-generation Ugandan Jew in the lead to win this weekend. Witnesses said, however, that cars full of men armed with guns and sticks approached polling stations with pre-ticked voting papers and “stuffed” ballot boxes.

Witnesses said that when party agents tried to prevent this from happening they were beaten. At least nine party agents are said to have been attacked in this way.

Sizomu’s team said one of them was beaten unconscious while others suffered bruises and chest pains.

The violence and intimidation is said to have begun in the morning, with supporters of the rabbi being threatened as well as party agents.

One witness, Dan Kutosi, who was at the Bufumbe headquarters polling station, said that along with attacking party agents, the thugs were trying to destroy the banana plantations of the rabbi’s supporters.

Uganda’s general election resulted in another term for the incumbent President Yoweri Museveni, who has been in power for 25 years. He took 68 percent of the vote, according to the Electoral Commission, with his closest challenger, Dr. Kizza Besigye, winning 26%.

Besigye, a former ally of the president, has alleged fraud and has in recent days threatened to encourage his supporters to protest if the process was not free and fair.

International election observers noted numerous problems with voting in the election – including failure to seal ballot boxes and a huge number of voters who found that they were not on the register at the polling stations where they came to vote.

The chief of the EU observer mission said, however, that despite administrative and logistical failures, he was pleased that the process had been an improvement on the previous election in 2006.

Sizomu is from a small community of just 1,500 Ugandan Jews known as Abayudaya, who live in eastern Uganda, near the town of Mbale. He was ordained in 2008 after studying in both the United States and Israel.

His popularity in the region extends well beyond the Jewish community; he had an imam supporting him on the campaign trail and is popular with both Catholics and Muslims.

One reason for his popularity is thought to be the fact that his community receives money from Jewish organizations around the world.

In the region where he lives, many people still live without running water or electricity. The Abayudaya Jews don’t use the money they receive from abroad just for their own benefit; the schools they’ve helped to improve and the health clinic they recently built with these donations are open to all faiths.

This pluralistic approach has won Sizomu a lot of local support. A central component of his campaign has been his pledge to try to raise more money from abroad to improve life for all members of his constituency and not just the Abayudaya.

A report about Friday’s violence has been made to the Mbale Police, who say they are investigating the issue.

Sizomu has pledged to take the matter to court, if necessary.