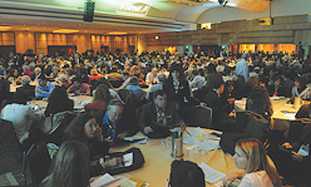 NEW YORK – As J Street puts the finishing touches on plans to fan out into more than 20 communities with new local chapters, detractors in Philadelphia are crying foul over a kick-off event that the “pro-Israel, pro-peace” movement has planned for Thursday night.

Striking at the heart of a debate over whether J Street’s policies place it among mainstream Jewish organizations, critics are upset that Hillel at the University of Pennsylvania agreed to rent its space to J Street. The organization is set to officially launch its local network on February 4, when J Street Executive Director Jeremy Ben-Ami’s speech in Philadelphia will be Web cast to simultaneous launch events in cities including Baltimore, Chicago, New York and San Francisco.

“I vehemently disagreed with the decision to rent to J Street in the Hillel building,” said Lori Lowenthal Marcus, a Hillel board member who founded a right-leaning group, Z Street, and plans to hold a competing event on Thursday night in the same building.

“I disagree with just about every policy J Street has with respect to the Middle East,” she said, calling it a “big mistake” for Hillel torent the space. Acknowledging J Street’s first amendment right to free speech and gathering, she said Hillel was sending the wrong message by allowing the kick-off to take place in its building.

“Although it is only rented space, and not a Hillel-sponsored event, I believe it will be known and remembered as the J Street event at Hillel and that is handing the keys to J Street into the mainstream Jewishorganization club. And I don’t think it’s a mainstream Jewish organization,” she said.

Hillel has defended its decision, however, and in a statement released January 24, Hillel Director Jeremy Brochin said the board applied routine criteria to the query: that J Street accept Hillel’s support of Israel as a Jewish state with secure borders; that it did not advocate harm to Israel, including sanctions; and that it present its views with civility.

Stating clearly that Hillel was not officially sponsoring the event, the statement read: “We believe it is important that all voices that abide by our principles regarding Israel’s right to exist as the nation-state of the Jewish People have an opportunity to express their opinions in our building as long as they commit to maintaining civility in their presentations.”

The statement emphasized a diverse group of speakers that visited the campus in recent months, including Israeli Ambassador Michael Oren, Jewish Agency Chairman Natan Sharansky, the professor Daniel Pipes and the activist and writer Nonie Darwish.

“It is important to emphasize that, as with all of our speakers, J Street’s use of our facility does not constitute an endorsement by Hillel of the policies of the group or of the opinions expressed during its meeting,” the statement said.

J Street’s national leaders say the local movement is an effort to push its online support base into community meetings and activism. The co-chair of J Street’s Philadelphia branch, Jon Grabelle Herrmann, said that after Ben-Ami’s speech, attendees would break into working groups to plot their next steps.

“We’re excited because the event is our first opportunity to convene various people we know are interested in the pro-Israel, pro-peace agenda, as well as attracting new people to the agenda,” he said.

Herrmann said J Street organizers sought space for their event in the Hillel building because it has a public façade and Jewish character.

“University campuses have a really broad sort of spirit of openness and debate, and our thought was that this location for the event, other than being convenient for people to get to, is a center for public discussion about issues of importance to the Jewish community,” he said.

Adding that it is Hillel’s job to define what is appropriate use of its facilities, Herrmann said his understanding was that Hillel canrent space to a range of groups that fall within the “pro-Israel tent.” Still, similar questions about the use of Hillel’s space has led Hillel of Greater Philadelphia to develop a policy, or set of criteria, to be applied to groups and speakers seeking a platform at a Hillel building. The local Hillel board was set to meet on Wednesday to finalize language for a policy fueled, at least in part, by controversy that erupted over three speakers at Temple University last year.

“Given that conflagration, Hillel began to think of whether or not there should be some guidelines in place so that it’s not an off-the-cuff, last-minute decision that may have unanticipated repercussions,” Marcus said.

While J Street is a different issue, in that it is not a student-sponsored event, it is not unrelated.

“None of us had thought about renting space,” Marcus said, “That’s typically not a policy issue, it’s a commercial transaction, but it does have political implications.”

She alleged that some members of J Street’s Philadelphia local advocate policies she thinks are harmful to Israel, or would deny Israel’s right to self-defense.

But J Street organizers in Philadelphia vehemently defended their pro-Israel stance. Herrmann, who is married to a rabbi and is the grandson of a Holocaust survivor, said to “suggest that I’m not pro-Israel doesn’t ring true on any level.”

“I think the best way to support Israel is to make sure that as many American Jews as possible are engaged in the debate about what’s going on in Israel,” he said. Steve Masters, who served as national president of Brit Tzedek v’Shalom and is involved in organizing J Street’s local presencein Philadelphia, told The Jewish Exponent: “J Street is a completely pro-Israel organization – and there are so many different ways to be pro-Israel.”

“The reason I got involved was because from my perspective, it’s hard to have a debate about what’s best for Israel in the American Jewish community,” he said. “The party line in America seems to be that you support whatever the government of Israel does, no matter what, and that’s the only way to be pro-Israel.”

J Street brings new voices to the table, he said.

“We think the best way to have vigorous support of Israel in the American Jewish community is to have a vigorous debate. It’s part of democracy,” he said.