For a person of color in America, the term person of color can be both useful and divisive, at once a form of solidarity and a badge of alienation. There’s a flattening effect, too: A multitude of ethnicities and cultures, with their own color-coded nuances, get crammed into the initials P.O.C.

Among its many virtues, Mira Jacob’s graphic memoir, GOOD TALK (One World, $30), helps us think through this term with grace and disarming wit. The book lives up to its title, and reading these searching, often hilarious tête-à-têtes — with her parents and brother, confidantes and strangers, employers and exes — is as effortless as eavesdropping on a crosstown bus.

Mira lives in New York with her husband, Jed, who is white and Jewish, and their young son, Z., who is dark-skinned like his mother — a poster for racial harmony that can, in the current climate, feel like a target. Born in New Mexico to parents who immigrated from India in 1968, Mira is simply “brown,” if ethnically obscure, while growing up (“You’re Indian like feathers or Indian like dots?” a boy asks her). Ironically, she first feels the stigma of skin color on trips to her parents’ native country, thanks to not being as “fair” as the rest of her family. As a girl, Mira envisions the “lighter, happier, prettier me.”

In fifth grade, Mira tastes literary glory when she wins an essay contest sponsored by the Daughters of the American Revolution (on “Tools of Early America”). A stern but proud teacher drives her across town to the Elks Lodge, where Mira addresses the politely confused sponsors with an eye-opening claim: “Hammers were among the most used tools of the early American settlers.” (Jacob’s comic timing is impeccable.) The chapter conveys a dream of integration that’s at once heartwarming and dated — a model-minority moment, complete with the teacher’s fierce pep talk: “You are an American … don’t you ever let anyone tell you that you’re not.”

Over the years, though, Mira finds plenty of people who do just that. In the wake of 9/11, the horror binds people in the city together, but then there are others, like a man at a bar Mira goes to, who suddenly feel emboldened to make comments like, “How do we know you aren’t plotting to kill everyone in here if you won’t even talk to us?” “I guess America got kind of weird for us for a while,” Mira tells her son, while withholding all the micro- and macroaggressions she’s endured on the subway, in a diner, on the street.

Included within that “us” are mother and son. But where does that leave Jed? After the 2014 shooting of Michael Brown in Ferguson, 6-year-old Z. starts to question his place in society. “Is it bad to be brown?” he wonders. “Are white people afraid of brown people?” Progressive to the gills, with a lifetime of P.O.C. wisdom, Mira-as-mom carefully deflects and reassures. Then comes the kicker: “Is Daddy afraid of us?” The biracial Z. is trying to parse the color line, circa now, and see which side he’s on, as if there would be some comfort in knowing. It’s a skill he’ll have to hone all his life, the way his mother has, and the way his father has never had to.

Throughout “Good Talk,” Jacob reproduces the same black and white figures, like cutouts you can turn into finger puppets, often set against colorful photographs: a Chelsea street, her parents’ kitchen. Even her major characters have just a few avatars, with fixed poses and expressions. Jacob zooms in and out, juxtaposes, crops. The figures work well as delivery systems for her dialogue, at times generating a deadpan humor, like the clip-art ciphers in David Rees’s “Get Your War On” (2002). On occasion, the photocopied feel dilutes the text, as in a fight between Mira and Jed over his parents’ full-throated support for Trump. Their faces, adequate in prior situations, appear oddly dazed and distracted.

But the medium is part of the magic of “Good Talk.” The old comic-book alchemy of words and pictures opens up new possibilities of feeling. During one searing argument, Mira asks Jed if his Jewish, MAGA-spouting folks — who are doting grandparents to their mixed-race child — would be O.K. if she voted for an anti-Semitic candidate. “I don’t know that it’s helpful to be so black and white about it,” Jed retorts. In a flash, the graphic elements (monochrome cutouts, photos) of “Good Talk” seem to be a commentary on race. The people are black and white — except, of course, they’re not.

In NOBODY’S FOOL: The Life and Times of Schlitzie the Pinhead (Abrams Comic Arts, $24.99), the virtuoso comic-strip artist Bill Griffith gives voice to a true outcast — the sideshow attraction born Simon Metz (probably) in the Bronx (probably) in 1901. He fills the biographical lacunae with vivid info on the sideshow life, Hollywood in the ’30s, and linework so rich you could eat it. A microcephalic, or “pinhead,” “Schlitzie” drew crowds for nearly 50 years, variously presented as some biological oddity (“The Missing Link”), lost-race survivor (“Last of the Incas”), and/or female (“Monkey Girl”). Because of his mental disability, his vocal output was limited to nonsense repetitions: “Boffo!” “I like dishes.” “Is he married?” Yet he made an indelible appearance in “Freaks,” Tod Browning’s notorious 1932 sideshow-revenge movie, and in this way affected the course of cartooning history. 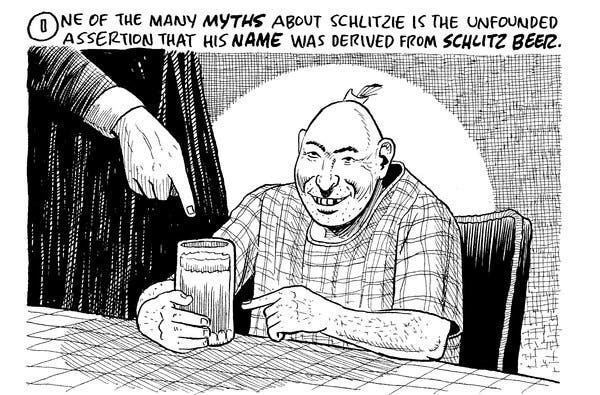 As a Pratt student in the early ’60s, Griffith caught a late-night revival of “Freaks,” and was immediately drawn to Schlitzie. Attempts to render this vision came to naught, but years later, embedded in San Francisco’s underground comic scene, Griffith was inspired to cast a pinhead as one point in a romance-story parody; in the last panel, he gave him the name “Zippy.” Zippy became the titular star of a weekly strip in 1976, which was picked up a decade later for daily syndication, allowing Griffith to showcase his hero’s hyperverbal, free-associative riffs seven glorious times a week. The collected works read like a looking-glass version of “Doonesbury,” the same cultural and political inputs producing something wildly random and addictively funny. (Peak Zippiness for me remains 1985’s mind-blowing “Are We Having Fun Yet?,” with cameos by everyone from Officer Big Mac to Leona Helmsley.)

“Nobody’s Fool” is an act of homage and loving reclamation. Griffith hasn’t forgotten the influence Schlitzie had on his art, and in this way the book makes a fitting companion piece to “Invisible Ink” (2015), a memoir of his parents’ marriage that focused on his mother’s long affair with Lawrence Lariar, a prolific, now forgotten cartoonist. It’s a brave and moving investigation into a lurid family secret, as well as an apt origin story for Griffith. (The prolific Lariar actually had work in the very first all-original comic book, “New Fun.”) Though Schlitzie’s biography leaves scant traces in the historical record, Griffith brings each scene to life, from F. Scott Fitzgerald freaking out over the “Freaks” invading the MGM commissary, to Schlitzie’s sharing a bill with the Beach Boys at a citrus farmers’ promotional show in 1962.

Sold by his family to a manager in 1909, constantly crisscrossing the country, Schlitzie leads a life of tragic dimensions, including a harrowing stay at the L.A. County Hospital. Yet this is an uplifting, wonderfully humane book. The so-called freaks have a winning camaraderie, and one of Schlitzie’s last managers even legally adopts him. Practically mute, Schlitzie is not really the jabber-jawed Zippy, but his gentle spirit somehow shines through. With “Nobody’s Fool,” Griffith suggests a transmigration of souls.