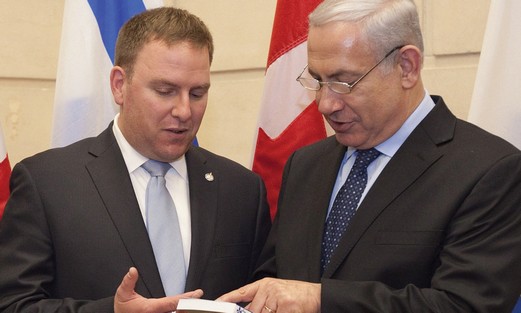 The State of Israel resembles the province of Quebec in Canada in more ways than the residents of either one would assume,” says Richard Marceau, an 11thgeneration Quebecker from a staunch Roman Catholic family.

The former Bloc Québécois parliamentarian who believes Quebeckers have a right to split form Canada and create a sovereign state of their own chose to convert to Judaism in 2004 after a long, complex spiritual process.

This process began when he fell in love with Lori Beckerman, a Toronto Jewish woman who, despite being secular, “opened the door to a people, a nation, a culture and a religion that I grew to love,” he says.

Marceau, who was first elected to Canada’s House of Commons in 1997 at the young age of 26, has just published his memoirs in a book entitled A Quebec Jew: From Bloc Québécois MP to Jewish Activist. The book, which has been awarded a Canadian Jewish Book Award, recounts his journey from Catholicism to Judaism, and how Judaism, the Jewish people and the State of Israel have become an integral part of his life.

Marceau suggests that Quebec could be well advised to follow the example of Israel when it comes to teaching new immigrants the predominant language of the society. He advocates teaching the French language to new immigrants to Quebec through intensive ulpan-type lessons that are paid for by the government, similar to the way new immigrants learn Hebrew in Israel.

The need for this type of intensive language training will only increase, according to Marceau, as in in the coming years in order to grow, “Quebec will need to take in more and more non-French-speaking immigrants.”

Additionally, as Marceau says, “These two societies, Israel and Quebec are destined to excel if they want to survive,” and that “Quebeckers can only be inspired by what the Jews have accomplished in Israel.”

Quebec, he says, will always feel under pressure to keep its identity, since the “Francophone” situation in North America is precarious.

“They represent only some 2% of the North American population, and they live beside the most powerful linguistic, cultural, political, economic and military empire in the world’s history.”

In his book, Marceau quotes from to René Lévesque, the former premier of Quebec, who referred to Israel as a national home very similar to the one French Canadians are trying to set up. Marceau laments the fact that in Quebec today the Lévesque-type statements are no longer heard, having been drowned by “today’s so-called progressives calling for boycotting Israel.”

Marceau, a lawyer who currently works for the Centre for Israel and Jewish Affairs as a senior adviser, and a regular visitor to Israel, describes himself as “a pro-Palestinian Zionist.”

As he explains, “I do not believe that being pro-Israel means I cannot be pro-Palestinian.

They are not mutually exclusive. It is not a zero-sum game. I believe in the right of the Jewish people to have a state in their ancestral homeland, and I support the Palestinians’ legitimate national aspirations. Both Jews and Palestinians have a right to live in their own states, peacefully side by side.”

A Quebec Jew was written, according to Marceau, who speaks Hebrew fluently, to dispel “misconceptions” that French-Canadians hold about Jews. As he notes, outside of the island of Montreal where “98% of the Quebec Jewish community lives, most Quebeckers have never even met a Jew.”

“I wanted to tell my story to Quebeckers to show that it is possible to be a proud Quebecker and part of this great, Francophone, unique and distinct society while being a very committed Jew,” he says.

Marceau’s memoirs will certainly be of interest to an audience much wider than Quebeckers, as he deals with issues that resonate well beyond the borders of Quebec. He recalls, for example, a trip to Israel he went on in the spring of 2000 as a member of parliament with his wife and other Canadian parliamentarians organized by Canada’s pro-Israel lobby group, the Canada Israel Committee. The group met Palestinian Authority negotiator Saeb Erekat in Jericho.

Marceau recounts how the group was upset to hear from Erekat that “he was a virtual prisoner in Jericho” forbidden by Israel to travel around the Palestinian territories. Marceau relates that the group of parliamentarians was upset that Israel was “pretending to negotiate in good faith” while forbidding the main Palestinian negotiator from traveling. “I remember thinking that the Israelis had played us,” he writes.

But then the following day he saw Erekat on CNN with the caption “Live from Gaza.” As Marceau concludes, “Erekat had lied to us, straight to our faces. I felt I had been had, not by the Israelis as I had initially thought, but by Erekat.”

Born in Charlesbourg, Quebec, on August 25, 1970, Marceau is the descendent of Frenchmen who arrived in what was then the colony of New France (now Quebec) in 1635.

He is named after his father, a former civil servant and a practicing Catholic.

After being educated by priests in Quebec City, Marceau graduated from law schools at Laval University and the University of Western Ontario, and also studied at the Ecole Nationale d’Administration in France.

As an advocate for Quebec sovereignty, Marceau represented the Bloc Québécois in the riding of Charlesbourg from 1997 until he lost his seat in the 2006 Canadian federal election.

He says that majority of his colleagues in his party had a “pro-Palestinian reflex.”

On the subject of anti-Semitism, “One cannot say that Quebec is anti-Semitic even if unfortunately there is some anti-Semitism in Quebec,” he says.

He does, however, recall his own grandmother calling him “‘my little Jew’ [mon petit Juif] when I was unruly.”

Marceau decided to write A Quebec Jew after closely following sessions of the Bouchard- Taylor commission, which was created to study the issue of reasonable accommodations for minority groups. The hearings were broadcast on television.

“I wanted to address the issue raised in front of the commission because comments were made regarding the false report that Jews want to impose a ‘kosher tax’ on everyone. There was a misconception that Quebec consumers were paying the cost of kosher certification, without their knowledge, against their will,” he says.

Marceau debunks this myth, explaining that many products finding their way into Quebec grocery stores are kosher since companies have made sensible business decisions to obtain the certification. In Quebec only 30% of kosher products consumers are Jewish.

“The other 70% is divided between Muslims, environmentalists and the general population,” including those that are vegetarian, or allergic to milk products or to seafood.

ALTHOUGH MARCEAU had no intention of converting to Judaism when he got married, he eventually changed his mind. “I wanted to be part of this ancient religion… this philosophy that has attracted me by its emphasis on the family, helping one another and asking questions and reasoning.”

Marceau initially converted in a Reform ceremony, but after becoming much more traditional and observant, he went through an Orthodox conversion.

Regarding the circumcision he had to undergo, Marceau says, “I quickly came to believe that it is better to undergo surgery at eight days old than at 34 years.”

His conversion was a difficult thing for his father to accept. When he first told his father, the latter said, “My best friend is a Jew.” When Marceau asked who, his father replied: “Jesus.”

In the introduction to his book, Marceau confesses that the book was almost called “The Bad Jew” because “according to a portion of the Quebec intellectual class, a good Jew is a Jew who is always critical of Israel, even an anti- Zionist, who seeks the destruction of Israel.”

Marceau says he sent the manuscript of his book to one person from a prominent publishing company in Quebec who held that view. Although he thought the book was well written he declined to publish it as it was too pro-Israel.

“I am therefore a bad Jew, and am proud to be called so,” he says.
(Tags: Israel, Canada, Quebec, Jews)