A Young Man From Omaha, Who May Perfectly Represent Brooklyn 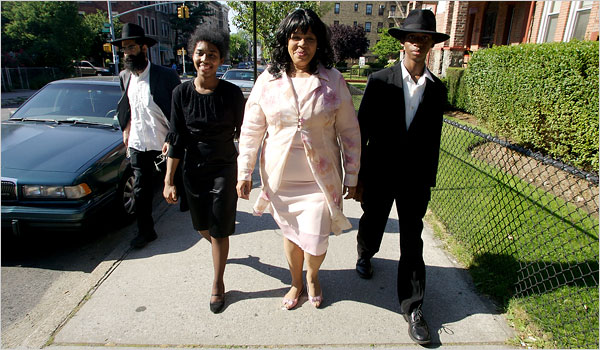 Moments before Yosef Abrahamson, 16, accepted an award for the essay he?d written in a competition sponsored by the Police Athletic League, an officer approached him to complain about his fedora. The hat, an essential wardrobe item for Hasidic men, was gaudy, the policeman told him, and what?s with all these kids today and their nose rings and their attitudes. A second police officer, overhearing the conversation, came over to steer away the first one, who reappeared a few minutes later to apologize. He?d never seen a Hasidic Jew, he told Yosef.

Thanks to his Egyptian father, who left the family when Yosef was young, and his maternal grandfather, who was of African descent by way of Panama, Yosef looks African-American (though his family prefers to describe themselves as Jews of color, believing their culture to be exclusively Jewish). Yosef moved to Crown Heights only a year ago, until then having lived in Omaha, where his mother?s maternal family, German Jewish merchants, had settled several generations earlier.

If Yosef, who attends the yeshiva Darchai Menachem in Crown Heights, ever finds himself writing a college application essay, his advisers would have a hard time choosing which of his compelling story lines would most dazzle those college admissions officers: The story of growing up in a Hasidic family in Omaha? Or the story of being the only student of color in his yeshiva? Or maybe the story of being the only Hasidic person of color in Omaha?s competitive ice skating circuit?

Despite the friendships he made while ice skating, a hobby his mother encouraged to round him out, life in Omaha was ?a bit lonely,? Yosef admitted last week while eating a Kosher hamburger on Albany Avenue with his mother and his older sister, Sarah, 22. His mother, Dinah, who joined the Chabad-Lubavitch movement after seeing videos of Rabbi Menachem Mendel Schneerson several years ago, home-schooled both of her children.

Yosef was obviously sheltered from too much scrutiny from the outside world, but the surprising combination of his race and his particular form of religious observance fazed no one in Omaha ? for all the average person knew in Omaha, all Hasidic Jews were of African descent, his mother said. When friends from Nebraska first visited New York, they were fascinated to meet some white Hasids for the first time.

It was easier for Ms. Abrahamson to raise her children in Omaha than it would have been in Crown Heights, she said.

?People are laid-back in Omaha,? she said. ?It?s different there.?

Omaha is not, for example, a place where race relations between Jews and blacks have exploded into days of riots, as they did in Crown Heights in 1991; nor have the police in Omaha ever deemed it necessary to set up mobile command centers to monitor simmering tensions between Jews and blacks, as the New York police did last month in the Brooklyn neighborhood in response to two unrelated physical altercations.

A young man like Yosef could easily start to feel like a powerful symbol, rather than just a kid, the human embodiment of that famously controversial Art Spiegelman New Yorker cover depicting a Hasidic man embracing an African-American woman.

But life in Crown Heights is somehow less complicated than that for Yosef, a tall, athletic young man who seems to have internalized Omaha?s easygoing ways (and its broad Midwestern accent). Beyond the misunderstanding at the awards ceremony ? of which Yosef said, ?It was a bit strange, but really, I understand? ? he says he has felt comfortable in Crown Heights from the moment he came there to advance his education.

Through summer camps and occasional trips to New York, the Abrahamsons were already familiar to the Jewish community in Crown Heights when he arrived last fall (the community has only a handful of other black families). The response from the African-American community has been, if anything, amazement. ?Now I?ve seen everything,? an African-American man said three or four times as he passed Yosef and his mother and his sister walking home from synagogue.

Some black neighbors recently asked Ms. Abrahamson questions about the meaning of some Lubavitch fliers they had received in the mail. The family sensed that the neighbors had long been harboring those questions but had felt a certain comfort level with the Abrahamsons because of their shared skin color.

If there have been resentful or disapproving responses from either side, they have apparently gone as far over Yosef?s head as the references his ice skating friends used to make to movies or television shows he?d never seen.

The ease with which both communities have received Yosef seems a little unlikely, but appropriate in the year of what some call the country?s first post-racial presidential campaign. Except that the Abrahamsons consider themselves ?post-racial, for real,? said Ms. Abrahamson, a Republican delegate in Nebraska who is not a fan of Mr. Obama. To the contrary, the whole family strongly supports John McCain, and Yosef will be a page at the Republican National Convention in the Twin Cities in September.

One more item to add to that list of possible essay topics.

Correction: June 27, 2008
The Big City column on June 16, about the Abrahamson family, African-American Hasidic Jews who moved from Omaha to Brooklyn, included an erroneous distinction from the family matriarch about her family. The Abrahamsons were not in fact the only Hasids in Omaha when they lived there.
(Tags: Black, Hasidic Jew)