An Irish Tradition With an Only-in-America Star 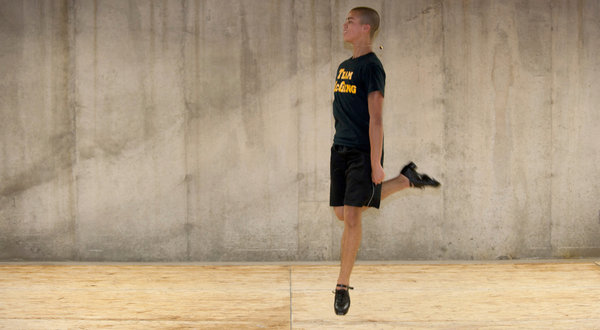 For those feeling down about the United States and its place in the world, meet Drew Lovejoy, a 17-year-old from rural Ohio. His background could not be more American. His father is black and Baptist from Georgia and his mother is white and Jewish from Iowa. But his fame is international after winning the all-Ireland dancing championship in Dublin for a third straight year.

Drew is the first to admit that this is a lot to take in, so he sometimes hides part of his biography for the sake of convenience. As in 2010, when he became the first person of color to win the world championship for Irish dancing — the highest honor in that small and close-knit world — and a group of male dancers in their 70s, all of them Irish, offered their congratulations.

“They said, ‘We never thought it would happen, but we’re thrilled that it did,’ ” said Drew’s mother, Andee Goldberg. She added, “They don’t even know he’s Jewish. That hasn’t been broached. I think it would be too overwhelming.”

On a recent Wednesday, Drew, dressed in an orange polo shirt and jeans, was eating grapes and holding a tiny, shaking dog named Belle while his mother talked about his accomplishments. Ribbons and trophies adorned his sea green bedroom, the rewards of dozens of competitions since he started dancing at the age of 6.

Neither mother nor son can remember a time Drew wasn’t dancing, or the reason that he started. Drew thought it might have had to do with his mother getting tired of Disney movies and playing Fred Astaire and Gene Kelly videos for him. She also took him to musicals and theater performances.

But when he went to a friend’s Irish dance competition in Indianapolis, and saw the girls and boys leaping and skipping, dancing that was part tap, part ballet set to very happy music, he was hooked.

“I was like, ‘Yeah, right,’ ” his mother said, shaking her head. “You’re biracial and you’re a Jew. We thought you had to be Irish and Catholic.”

His rise was so meteoric that after an early competition, Ms. Goldberg took a picture of a table instead of her son, so startled was she that he had won that she didn’t manage to point the camera properly.

Now, Drew spends several hours a daydancing and at least an hourtraining. He goes to a dance school in Cincinnati, a two-hour drive from his home in Greenville. His focus is so strong that he once danced an entire competition with seven broken toes.

In the dance world, his unusual background was a plus. People remembered him. In 2008, competitors and friends started comparing him to Barack Obama, a parallel that still makes him hop up and down and clap his hands. (The fact that he will never be old enough to vote for Mr. Obama for president is one of his biggest disappointments, he said.)

“It’s that black kid from America in the pink shirt,” Drew Lovejoy said, repeating what people say about him.

But it has served him less well here in his hometown, where a rural stretch of road bisects sweeping pastures dotted with aging barns. He moved here when he was 9, after his mother married Donald Goldberg, a Greenville resident she met at a nearby synagogue. (She had parted with Drew’s biological father, Terrance Lovejoy, when Drew was still a baby, though she remains on good terms with him, and says he sometimes rides to Drew’s competitions with her husband.)

It was not easy. Drew was a dancer, unusual for boys here, and black in a mostly white town. Bullying eventually prompted his mother to pull him out of school and start him in an online education program. He is still there today.

While most townspeople accept him, with some going out of their way to make him feel comfortable, Drew said he still does not feel entirely at ease. He does not walk the dog after dark.

“I feel like I have to watch my back,” he said, his hands resting flat on the green kitchen tablecloth.

At 13, he helped Mr. Obama’s election campaign, knocking on doors and making phone calls, an uphill battle in a county that consistently votes for Republican candidates. But when one of Drew’s phone calls ended in an older man using a racist epithet and hissing that Mr. Obama should die, his mother put a stop to her son’s canvassing.

You have two lives — the Irish dance world and the real world where you live every day,” Ms. Goldberg said. In the world of dance, “you found a place where you’re comfortable and people don’t look at you in a certain way.”

Their family has an easy way of talking about race, in part because their life experience has required it. Both Ms. Goldberg and Drew’s biological father had to put up with friction from parts of their own families over their choice of one another. But time — and Drew’s charms — swept that away.

Ms. Goldberg still laughs when she remembers Drew’s father’s question to a doctor on the day of her Cesarean section: “Is he going to darken up?”

Recently, Drew and his mother had a welcome surprise. New neighbors moved in next door. When Drew mentioned his dancing, somewhat reluctantly, the roommates — a real estate agent and a landscaper — got excited.