An NBA Star in the Holy Land

Weeks before beginning his campaign to return the moribund New York Knicks to respectability, Amar’e Stoudemire traveled thousands of miles to Israel on an entirely different kind of mission. He’s exploring his ties to Judaism.

Sitting poolside at the five-star InterContinental David hotel Monday amid an oppressive Middle Eastern heat wave, the NBA power forward’s head was covered with a knitted white yarmulke, and his words were punctuated with Hebrew. The Jewish skullcap—most often associated with Orthodox Jews when worn outside a synagogue—is “to pay homage to God, Eloheem,” he said. “It’s like praying all day and showing your respect to the creator.”

Mr. Stoudemire’s seven-day Israel trip, which ended Tuesday, came just a few weeks after the 2003 rookie of the year and five-time All-Star ended an eight-season stint with the Phoenix Suns to sign a five-year contract with the Knicks for $100 million.

From the moment he arrived, there was a swirl of speculation about whether Mr. Stoudemire might be Jewish. Israel’s daily Haaretz English online news service picked up a report on July 28 from Army Radio that the power forward’s mother, Carrie, has Jewish roots. Mr. Stoudemire has helped stoke some of that mystery by updating his “Amareisreal” Twitter account, which he started a year ago, with messages like: “I think I might have some Hebrew Roots & i’m researching it,” and, “I found my tru culture.”

It appears that Mr. Stoudemire isn’t Jewish under religious law. Mr. Stoudemire said his mother’s links are solely from her study and appreciation of the Old Testament.

Mr. Stoudemire, a Florida native who attended a Baptist church, had a volatile childhood. His father, whom he describes as “spiritual,” died of a heart attack when he was 12. His mother has struggled with substance abuse and has been in and out of jail. In 2006, she was sentenced to three years in prison for drunken driving.

Mr. Stoudemire said it was his family’s dedication to biblical scripture and his attendance at Sunday school that planted the seeds of an affinity to Judaism that he says has grown over the past decade. While he doesn’t consider himself religiously Jewish, he said he feels spiritually and culturally Jewish. 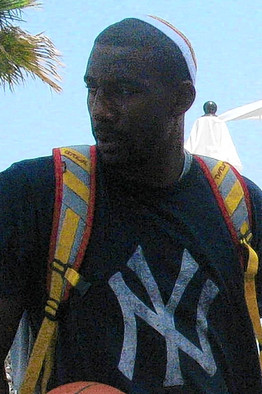 Mr. Stoudemire wearing his yarmulke this week in Tel Aviv.

• I’m here in Tel Aviv. This city reminds me of Miami. The restaurants are great an so are the people. Thanks fans for following me. Laila tov

• I went to the Dead Sea, It has so many minerals, it allows you to float. I feel rejuvenated .It’s truly special. Follow @thenyknicks Shalom

• Being open minded toward other cultures is beautiful. Studying your heritage is very important.”What’s a Tree w/o Roots” Le’chayim, 1love

• On the flight to Israel. This is going to be a great trip. The holy land. Learn about it. This ze ha’halom sheli. Shalom.

That conviction led him to Jerusalem on a sightseeing itinerary that included many of the must-do’s of Jewish-roots tourism in Israel: a meditation at the Western Wall, the holiest site to Jews, a visit to Israel’s Yad Vashem Holocaust memorial, and an ascent to mountaintop fortress Masada in the Judean Desert. In keeping with the Jewish practice, Saturday was spent resting in Jerusalem, though Mr. Stoudemire said he didn’t attend synagogue. “This is where it all started. The Jewish culture is the original culture, so it is only right for me to reconnect myself with my heritage,” he said. “I could be anywhere else in the world right now, but this is the place where I love history, I love spirituality, and I love knowing about who I am.”

In a country where basketball runs a close second to soccer in popularity and where many people have ties to New York, Mr. Stoudemire cut a familiar visage. As he strolled through produce stalls in Jerusalem’s Mahane Yehuda market, American tourists shouted “MVP! MVP!” At the InterContinental hotel pool, he posed for pictures with fans.

Mr. Stoudemire isn’t the first American celebrity to come to Israel on a spiritual journey—Madonna and Demi Moore are two—but such a quest is unusual for an NBA player. He acknowledged that he’s a little unsure how his newfound embrace of Judaism comes across. During an interview he asked a reporter, “When you hear this, do you think, ‘This guy is crazy?’ ”

Mr. Stoudemire’s interest in Judaism coincides with a stepped up relationship over the past three months with Idan Ravin, a private trainer who works with NBA players. Mr. Ravin says Mr. Stoudemire’s Hebrew comes from lessons in recent weeks with Mr. Ravin’s Israeli mother, a teacher in a Jewish school in Washington, D.C. Mr. Ravin, who accompanied Mr. Stoudemire on the trip, said Mr. Stoudemire is a quick read on foreign languages, and he speculates the skill is linked to his ability to decipher an opposing defense.

While in Israel, Mr. Ravin has been holding his client to a regimen of daily workouts of up to 90 minutes. He has also become a part-time spokesman. Mr. Ravin said there is no financial motive or “hustle” in Mr. Stoudemire’s decision to explore Judaism. “He’s found something that is meaningful to him.”

As he prepared to leave Israel Tuesday night, Mr. Stoudemire said he felt “more connected to Eloheem.” He said he planned to keep wearing the yarmulke and to observe Jewish holidays.

Mr. Ravin, who said he and Mr. Stoudemire “lost track of time” during the trip, said he thinks the NBA star will make a follow-up visit. “He’s like, ‘I’m going to come back again 100%.’ He’s going to be a regular.”
(Tags: American, Israel, Sports)