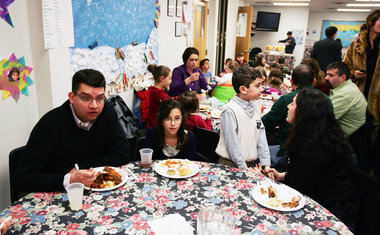 Karen Jimenez wasn’t a “terribly serious observing Jew” before her children were born, and never pressured her Colombian, Catholic husband Freddy to convert, despite the advice her rabbi gave her before their marriage, she said.

The couple married in a civil ceremony with no clergy from either religion present. But 14 years later, their four children have all had a ritual circumcision or naming ceremony, go to temple regularly and are expected to be bar- or bat mitzvahed.

Raising their kids Jewish was a “non-negotiable,” said Jimenez, a member of Har Sinai temple in Hopewell Township.

“It’s hard to articulate,” she said. “It just gets internalized, and it was important to me. I feel that, to me, the chance to raise my kids Jewish is a gift.”

A growing number of couples face similar choices and adjustments as interfaith marriages have become much more common in recent decades. As Har Sinai sees more such marriages among its members, the Reform temple has put on a number of interfaith events, including a discussion last month of how well Hollywood portrays the marriages in movies such as “Fiddler on the Roof” and “Meet the Fockers.”

“In most Jewish families, most being non-orthodox, if you talk to someone, they have a cousin, a sister, an aunt who’s married someone outside the religion. It’s not as uncommon as it used to be, but for each family going through it, it’s a new thing for that family,” said Linda Kanner, head of the outreach and interfaith committee at the Jewish Family & Children’s Service of Greater Mercer County. The group works with Har Sinai to put on interfaith events.

“Everyone has to figure this out for themselves,” Kanner said.
“Everyone has to think about what works for them, for that particular household. They have to communicate about those things, preferably before they get married.”

Before 1970, just 13 percent of of American Jews married outside their faith. The percentage jumped to 28 percent in the next decade, according to the National Jewish Population Survey, and continued to climb to 47 percent for Jews who married after 1996. The most recent survey was conducted in 2000-2001.

Many interfaith families try to borrow from both traditions, especially around the holidays.

Jimenez’s children, despite being raised Jewish, still receive gifts from their Catholic father and grandparents at Christmas, she said. They have also been to Catholic Mass with their father’s side of the family.

Still, to avoid confusion, they’re told they get to celebrate the Christian holiday or go to church only because they have a Catholic father.

“They talk about the ‘December dilemma,’ but it wasn’t really a dilemma for us,” Jimenez said.

“Over the past 10 to 15 years there’s been a gradual acceptance with interfaith marriages within the progressive Jewish community, certainly without any question,” he said. “It’s more into the mainstream of Jewish life and there’s more of a welcoming attitude.”

He dismissed the idea that spouses that marry into the Jewish community must commit to one religion.

“The idea that religion is what binds a family is wrong,” he said. “It should be something that unites a family, gives a sense of focus and direction and spirituality.”

Princeton Township resident Eve Coulson said she has been able to avoid the December dilemma throughout her 26-year marriage.

The former Episcopalian converted to her husband’s Judaism 10 months after they were married.

Though Coulson said she wasn’t particularly religious before her marriage, she still saw conversion as a big step. It was not until she had wrestled with the issue for years and was seven months pregnant with their first child that she felt ready to make the change.

“When I was that close to giving birth, it did dawn on me that whatever I chose to do would affect this child,” she said.

“I didn’t want to do anything that would make this child feel neither here nor there and not fully a part of something.”

“It’s kind of what tipped me toward making the decision, because I realized it wasn’t really about me and my husband, and it mattered to me to get that right before the baby was ever born,” she said.

Since her conversion, Coulson said she’s adjusted to the “different rhythms” of the Jewish lifestyle and is ultimately very happy with her choice.

“I saw a lot of warmth in the Jewish community and I just liked the idea of having that for the family that we were starting, having that as a backdrop, as sort of a safety net, as a community I believed we could feel we were part of and would be there for us,” she said.

To make their marriage work, Hamilton residents Marty and Jennie Groener focused less on the differences and more on the universal morals and ethical values they both believed in, both in living their life together and raising their children, they said. They don’t regularly attend church or synagogue.

“You raise your kids with your sense of right and wrong, and you don’t have to tie it into a bow with religion,” Marty Groener said.

“I think we just had stronger values about living life and not being judgmental, and that was it,” Jennie Groener said.

Still, the pair kept some major holidays on their schedule, including Christmas and Passover.

“People preserve their culture more than they preserve their religion,” he said.
“I love Passover, it was a fun time in my life, and because I have fond memories of it, I carry it on.”

“We kept both holidays, and we kept Passover because it was important — not so much the religious factor as the traditional factor,” Jennie Groener said.