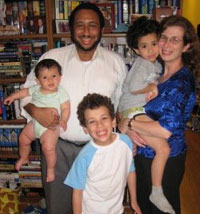 I am single-handedly destroying the Jewish community. Or so I’ve been told.

Well, maybe not single-handedly. I am, after all, just one person within the vast ocean of intermarried American Jews (47 percent of us, according to the National Jewish Population Survey 2000-2001). But I am, quite often, the only intermarried person at a given Shabbat/Rosh Hashanah/Shavuot table, and so, de facto, I tend to attract the cumulative blame for having married a non-Jewish man–thus destroying the Jewish community. Haman couldn’t do it. Hitler couldn’t do it. Stalin couldn’t do it. But apparently my 5-foot-7-inch husband can.

The first time this accusation was presented to me, I asked, with genuine curiosity, “So you’re saying it’s worse for the Jewish community for me to have married a non-Jewish man who lights Shabbat candles every Friday, agreed to our children being circumcised, attends Hebrew School parent-teacher conferences, and is more of a Zionist than many of our Jewish friends (one our sons’ Hebrew names is Barak, after Ehud Barak; our daughter is Ariel, after Ariel Sharon) than it would have been had I married a man who was born Jewish, yet practices none of the traditions and shows no interest in passing them on to our children?”

“Yes,” came the unequivocal reply. The first time. The second time. And the third time.

My husband, the scientist (he grew up in New York and he’s an engineer and a teacher: that makes him Jewish by osmosis, he claims) takes a more academic approach to the notion that we, together, are destroying the Jewish people.

“Let’s say that there are 10 Jews,” he proposes whenever the topic comes up. “Five men and five women. They marry each other and, at the traditional replacement rate, produce two children a couple (here he might digress for a mathematical analysis of why that number is actually 2.1 and what that means statistically; but no one needs to listen to that part). That’s only 10 new Jews. The same number you started with. But if 10n Jews marry non-Jews, then the five Jewish women will still produce ten legally Jewish children. And if even one of the Jewish men raises his children Jewish, that’s 12 Jewish children. Intermarriage produces more Jews, not fewer. What am I missing?”

“That’s an irrelevant argument,” we’re often told. And it is. But not for the reason the speakers think it is.

The mathematical argument is irrelevant because American Jews (outside of the Orthodox community) are not reproducing at the “called for” rate.

The average American woman gives birth to 1.4 children. The commonly accepted explanation is that Jews who marry other Jews tend to marry later (this trend among educated women crosses all ethnic groups), and thus produce fewer children. So those 10 hypothetical Jews above aren’t even delivering their minimum 10 children. They’re averaging seven. Here they did as they were told–they ran out and dutifully married other Jews–only to put us all further behind than when we started.

And it is at this point that I cease responding, and retreat to merely singing a little song in my head. It’s called “The Piano Lesson,” it’s from Broadway’s The Music Man, and it goes a little something like this:

When a woman has a husband

And you’ve got none,

Why should she take advice from you?

Even if you can quote Balzac and Shakespeare

And all them other highfalutin’ Greeks.