Being Jewish Used to Be Enough 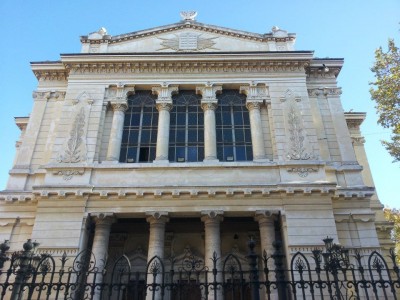 I recently saw a French film, the title of which translated into The Rabbi’s Cat. This movie, set in colonial Algiers, explored the place of Jews in the world: the place of the Jews among a secular colonial power, among Christians and Muslims of all sorts, and among themselves. Do black Jews in Ethiopia and blonde Jews in Russia have the same burial practices? Do they sing the same songs? And do the compromises they make in order to live where they live weaken or strengthen the Jewish people? The movie was made in 2011 and was set in the 1920’s, but its message and the unanswered questions it raised are timeless for the Jews, reaching back to Moses and assuredly far into the future. These questions and non-answers were particularly in the fore of my mind during my travels across Italy during fall quarter.

Walking through the Jewish ghetto in Rome, the most prevalent buildings are kosher restaurants and a museum attached to the synagogue. After wandering through the museum, overwhelmed by the familiarity of all the objects, a woman asked me if I had taken a tour to the synagogue yet. I said no and so she took me and a few other people into the synagogue. The tour guide told us about the history of the Jews in Rome, the highlight being that the synagogue that used to stand erect in the ghetto was home to not just one, but five congregations. During this time period, the Jews were only allowed to have one technical synagogue, but they had many different kinds of Jews. These weren’t the distinctions that we use today (Orthodox, Conservative, Reform, etc). Rather, there were two congregations for Italian Ashkenazi Jews, two for the Sephardic Jews who came to Italy after being expelled from Spain, and the biggest surprise of all: one for the Roman Jews.

In this one ancient and glorious city there were five groups of Jews with completely separated histories. This was not an isolated phenomenon either. The Jewish ghetto in Venice contained much of the same story. Within these separate traditions, there were and still are many levels of observance (although all the synagogues remain Orthodox). This multiplicity of ways in which to practice Judaism is relevant now—as the old saying goes: two Jews, three opinions. But what struck me here was the familiarity of every single object in the museum; that despite the slight differences of opinion and tradition, both now and during the ghetto, Jews have sometimes failed to recognize how incredibly meaningful it is that our ritual objects have remained the same and that the words in our prayer books and Torahs are essentially identical, not just in spelling, but in letter size and style—despite being scattered all over the world. We and they not only fail to recognize it, but we fail to see what a strong bond that can be. While they still couldn’t bring themselves to pray in the same rooms as each other, I respect the fact that, although it was only through persecution, they were forced to pray in the same building and interact with each other.

I think we—in a privileged time of freedom and security for Jews in America—might take a lesson from these older Jewish communities, one that they may not have seen themselves. What binds us together is much greater than the small variations of practice and tradition; we should use this bond to create a stronger and more unified Jewish community both locally and globally, so that when the next of the long list of potential oppressors comes along we can face them, together, for the continued survival of the Jewish people and our traditions.

Twice while in Rome I was asked for directions from groups of Israeli tourists. Immediately recognizing the accent, I asked them where they were from. When they confirmed my suspicions, not knowing how to express our inherent connection, I responded by saying, “I’m Jewish!” Shouldn’t that be enough for any of us?