Last week, we were forwarded an email from a friend of a friend who is a friend of Alan Dershowitz, the vocal Harvard lawyer, publicity maven and defender of Israel. In the email, Dershowitz wrote that according to his sources, the future child of Prince William and Kate Middleton — the future king of England and head of the Church of England — will be Jewish. “Kate’s mother, Carol Middleton, is the daughter of Ronald Goldsmith and Dorothy Harrison, both Jews. Dorothy Harrison’s parents are Robert Harrison and Elizabeth Temple — also both Jews,” Dershowitz wrote. 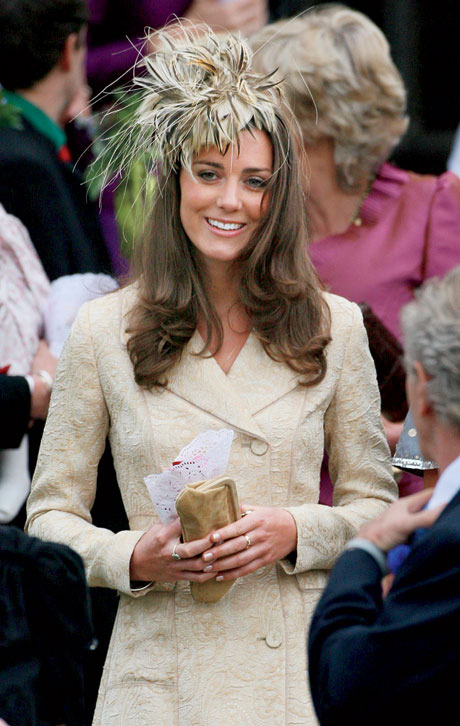 This is an awful lot of assumption, but it was enough to get us started imagining what would happen if Kate, the Duchess of Cambridge, decided to embrace her tentative Jewish roots and live a Jewish life.

The first order of business would be to hang mezuzot on the 23 doors of Kensington Palace — the front door, the west door, the gallery door and all the other doors. We’re sure there’s a butler with a hammer and nails who can help her.

If the young couple decides to keep kosher, two sets of dishes won’t be a problem. They can make the Royal Worcester Evesham china milchig and the Wedgewood Boleyn Red fleishig.

But let’s not get carried away. We know that we won’t be invited to Buckingham Palace for the next seder.

There’s a lot of debate about Kate’s roots. The assumption that she’s Jewish is based on the fact that her mother’s parents have Jewish-sounding names: Kate’s grandfather was a Goldsmith, her grandmother a Harrison.

Although we know Jewish Goldsmiths and Harrisons, you can’t assume someone is Jewish just from his or her name. In the 1857 book entitled An Etymological Dictionary of Family and Christian Names With an Essay on their Derivation and Import, the author writes that Goldsmith means “a banker, someone who traded in gold.” Not necessarily a member of the tribe.

Harrison means “son of Henry,” a name that came to England after the Norman Conquest in 1066. Many Henrys ruled England. Does the name Henry VIII ring a bell? We know he wasn’t Jewish. He had such troubles asking the Pope to grant his divorce that he formed a whole new church. It might have been easier for him to petition for a get.

Both of these Jewish-sounding names are on Kate’s mom’s side of the family, and most Jewish denominations follow matrilineal descent — e.g. if your mother is Jewish, so are you. That’s why Dershowitz and others are saying that Kate Middleton is Jewish. And if she is, her future children will be, too.

The question of “Who is a Jew?” has been debated for thousands of years. It’s a controversial question even when it doesn’t involve beautiful, young royals. The website Jew Or Not Jew assigns a score and renders a verdict on actors, musicians, scientists and even fictional characters. The site says that the Barbie doll is Jewish because her inventors, Ruth and Elliot Handler, were and she’s named for the Handlers’ daughter, Barbara. Don’t be misled by the toy’s blonde hair and blue eyes, the site cautions. JewOrNotJew declares Kate Middleton “not a Jew” and says, “the Jewish link was lost a long, long time ago.”

Sure, generations of Kate’s family have been baptized in churches and married in cathedrals, but losing the link doesn’t make you “not a Jew.”

We can’t presume to render a verdict, and the debate rages on. But while there’s a chance Kate would be interested, here are some more things she might consider:

Observing Shabbat shouldn’t be a problem, since we’re certain there are many ornate sets of candlesticks Kate can use. She’ll have to tell the butler to tell the chamberlain to tell the cook that they’ll need a large challah for Friday night dinner. And ixnay on the pheasant under glass; roast a nice chicken instead.

William can keep his beloved fish and chips. Perfectly kosher. Pickled onions, another traditional British delicacy, are also okay. And should he get the urge for a little haggis (sheep’s intestines stuffed with meat and vegetables), Kate could substitute some kishka (stuffed cow intestines).

Passover might be challenging. Just how long will it take to clean out the crumbs from the butler’s pantry, the master cook’s prep room, the scullery and the kitchen with enough ovens to cook for 100 guests? Get rid of the Scottish shortbread and stock up with cans of macaroons.

Of course, Will and Kate will be invited to the Jewish Federation Young Leadership cocktail party. Would he be part of the Real Estate or the Future Kings division? Kate better remind him to bring his business cards to exchange with the other up-and-coming machers.

When Kate joins her girlfriends for Girls Night Out, they could get mani-pedis or take in a movie. For Book Club, she’ll have to stop reading The Princess Diaries and suggest the group tackle The Red Tent next.

And those crazy hats that got so much attention at the wedding? Instead of saving them for Royal Ascot Races and the Order of the Garter procession, Kate can trot hers out for Rosh Hashanah and Yom Kippur services. She’ll fit right in, sitting in one of the front rows for the High Holy Days.

Whether Kate embraces her Jewishness or not, we’re sure all the Windsors will kvell when she gives birth to the future king of England. We’re just not holding our breath waiting for a bar mitzvah party at Buckingham Palace.