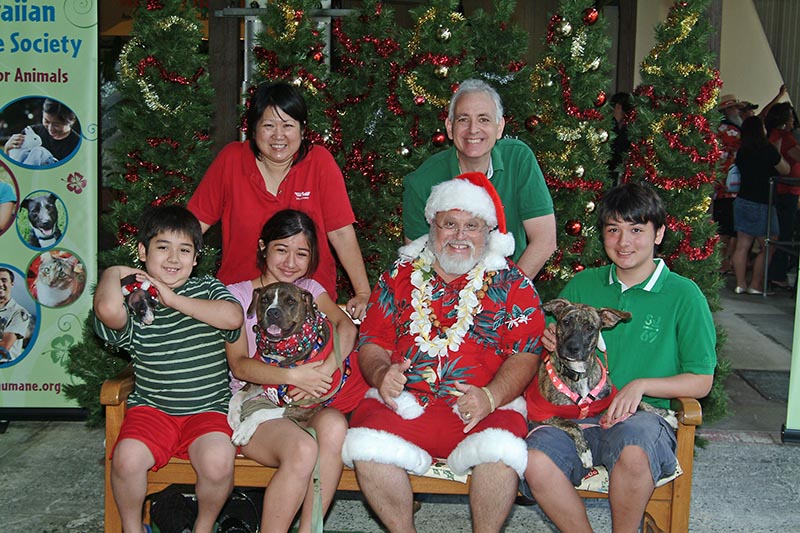 Even though I will always manage to work into any conversation that two of my three children are in the photo book Mixed Kids by Kip Fulbeck, sometimes it is very difficult to be a Jewpanese family in Hawaii. It is particularly tough going when it is the holidays and you are trying to leave out any sort of Christian essence to keep the peace in a Buddhist and Jewish household of five. Even more so when you are trying to explain to both sides of the family why you are doing things the way you do.

For me—a Buddhahead Buddhist—the most difficult part of the season is trying to explain to our friends and my relatives that we don’t do Christmas because my husband is Jewish or as my Dad prefers to tell people, “Haole Pa-ke” (Caucasian Chinese). I give my family credit, they do try their best to wish my husband and our kids a Happy Chanukah but it usually comes out sounding like they are congratulating them on some obscure Inuit celebration, “Oh yeah, Roy, have a nice CHA-NOO-KAR” or “Eh everybody, happy HANA-FUDA-KAH”.

While the pronunciation is somewhere out there in Juneau, Alaska, I am happy that the sentiment is there and they are making an effort to learn more about my husband’s culture and to do something out of their Honolulu comfort zones.

This whole adapt to Hachi’s different kind of haole husband is nothing new, it started when we invited everyone to attend our oldest son Dante’s bris or circumcision ceremony back in 1998. The phone rang off the hook, “What you mean you going to have one party to cut your son’s ding ding? And what, we gotta watch? Oh, what kind food you going to have? Sushi? Okay, we coming then.” I know that even today, a few of my big local moke uncles still have PTSD from the memory of that day—which is why with son no. two, it was done in private in the pediatrician’s office.

This year, things got even more complicated because our youngest son, Rysen, was cast as a shepherd in the second grade Nativity Play and we had to ask that he be pulled from the part because his Dad is Jewish. We did not let our two older children participate in the play when they were in Second Grade but after six long years and much aging on our parts, we totally forgot to address this issue before hand. While our son seemed happy to be a part of the quasi-non-denominational chorus, his Buddhist grandparents monku’d to any other jiji or baba within earshot that they couldn’t understand why he could not be the shepherd since there was “no proof” the character was Christian and it wasn’t like he was going to play Jesus. Star power always trumps religious beliefs, at least when it comes to stage grandparents anyway.

This familial culture clash is nothing new as we have spent many a holiday explaining to my parents that Easter does have something to do with Christ no matter how much emphasis is placed on chicks and bunnies, that the kids will not be social pariahs if we don’t let them have a cross made of ashes on their foreheads for Ash Wednesday, and that they should make sure that the Hawaiian Heirloom pendant they want to buy for our daughter is really a “T” for Taja and not a crucifix.

After 15 years of marriage, we have learned that the key to surviving the holidays is our mastery of the art of deception—basically using the total lack of knowledge of anything Japanese to explain away potential controversies to the Jewish side of the family and vice versa.

This is why decorated Christmas trees in family photos sent to relatives on my husband’s side are referred to as “Buddha Bushes” set up for Amida’s belated birthday (now, we just simply haul the tree and decorations to my parents’ house to avoid having the inevitable bachi that will come our way for using Buddha to keep the peace). The potato pancakes are not called Chanukah latkes but hash brown patties which adorned with furikake and dipped in tonkatsu sauce instead of the traditional sour cream and applesauce. If all else fails, we just divert people’s attention by throwing all of our pets in the mix—hoping they will be more concerned about the zoo living in our home than by the fact that the kids are close vicinity to good old Christian Saint Nicholas.