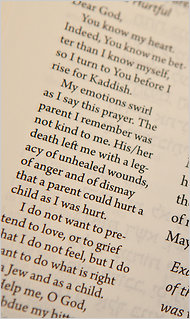 Text from the revised mahzor, as the prayer book for Rosh Hashana and Yom Kippur is known.

During the Jewish “Days of Awe,” culminating with Yom Kippur, many Conservative Jews will be turning the pages of a prayer book that no longer regards God as “awesome.”

The word, which has become an all-purpose exclamation that spread from Valley Girls to much of American teenagerdom, has lost its spiritual punch and dignity, say the authors of a new book for the High Holy Days that tries to bring the prayers in tune with contemporary times.

“If you say God is awesome, you are immediately in street language, rather than inspiring language,” said Rabbi Edward Feld, who headed the committee that over 12 years wrote and translated the new book.

Rabbi Edward Feld with the new book for the High Holy Days in Northampton, Mass.

This mahzor, as the prayer book for Rosh Hashana and Yom Kippur is known, is the Conservative movement’s first updating in nearly 40 years. Called Lev Shalem, Hebrew for “whole heart,” it hews close to the text’s traditional Hebrew, but adds translations, commentaries and optional readings to adapt the book to modern sensibilities.

The writing was partly driven by an awareness that Jews who come to synagogue on the High Holy Days may not be as knowledgeable as weekly synagogue-goers and may be more ambivalent about their faith. It also includes transliterations of every widely sung prayer for those who cannot read Hebrew.

“It went a long way toward meeting people where they actually are,” said Rabbi Gordon Tucker of Temple Israel in White Plains, N.Y.

He added, “The richness of the margins in this mahzor spoke to them.”

During Yom Kippur’s Yizkor memorial for dead relatives, which this year falls on Saturday, the new prayer book will for the first time include a prayer for a deceased “partner”— an effort to include gay Jews — and also one for “a parent who was hurtful.”

“His/her death left me with a legacy of unhealed wounds, of anger and dismay,” the passage says.

The revised mahzor includes works by modern poets like Yehuda Amichai and at least two by Gentiles— Denise Levertov and Elisabeth Kübler-Ross. Given that the movement has become more egalitarian, ordaining women as rabbis since 1985, the mahzor also includes more language that is gender-neutral and names female Biblical figures like Hannah and Miriam as models of righteous heroism.

So far, 120,000 mahzors have been ordered by 125 of the 850 Conservative congregations worldwide, said Rabbi Julie Schonfeld, executive vice president of the Rabbinical Assembly. The book can also be bought on Amazon.

While the pages are more crowded with the added commentary, Rabbi Feld said he thought the new mahzor would feel congenial in an Internet age.

“People are used to multitasking and hypertext and are able to absorb multiple flows of information,” he said.

“I’m not a warmongering, right-wing nut,” Mr. Levine said, “but that line represented a real historical response to the horrors visited upon Israel.”

Still, such misgivings were few, and Mr. Levine said he was pleased that his wife, Pat, a convert, told him that “for the first time she understood what some of the prayers were all about.”