Jews of color: Synagogues making them feel at home 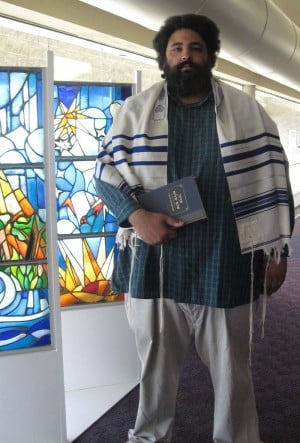 Meet Peter Womack, a devoted member of B’nai Jeshurun Congregation, where he davens each Shabbat after attending Torah study earlier in the morning. Womack is a proud Jew … although he may not look like the others in his congregation.

Multi-racial Womack describes his heritage as Scandinavian, European, African and Seminole Native American. He is one of several African-American or multi-racial Jews-by-choice who are finding a spiritual home in Cleveland’s Jewish community.

Womack, 37, grew up in Cleveland Heights with a younger brother and sister in a household headed by his black father, a pharmacist, and his white, Scandinavian mother, a teacher at East Tech High School in Cleveland. Peter attended Montessori Ruffing School and graduated from Cleveland Heights High School in 1992. He received a bachelor’s degree in economics from Hampton University in Virginia, a law degree from Georgetown University, and an MBA from Case Western Reserve University.

Endowed with a bright and searching mind, Womack said he felt the desire to make the world a better place, and that’s what led him to Judaism. For around 10 years, he studied comparative religions, including Buddhism, Hinduism, Christianity, Islam and Judaism. By age 33, he said he’d come to realize that Judaism was where he belonged.

Scandinavian mother, a teacher at East Tech High School in Cleveland. Peter attended Montessori Ruffing School and graduated from Cleveland Heights High School in 1992. He received a bachelor’s degree in economics from Hampton University in Virginia, a law degree from Georgetown University, and an MBA from Case Western Reserve University.

Endowed with a bright and searching mind, Womack said he felt the desire to make the world a better place, and that’s what led him to Judaism. For around 10 years, he studied comparative religions, including Buddhism, Hinduism, Christianity, Islam and Judaism. By age 33, he said he’d come to realize that Judaism was where he belonged.

Womack studied Judaism with both B’nai Jeshurun’s Rabbi Hal Rudin-Luria and Congregation Shaarey Tikvah’s former spiritual leader Rabbi Edward Bernstein, who performed the conversion ceremony at The Charlotte Goldberg Community Mikvah at Park Synagogue. Rudin-Luria and B’nai Jeshurun Senior Rabbi Stephen Weiss were in attendance at the ceremony, and Peter’s mother Carol Womack (now retired from teaching) was at his side.

Today, the 6-foot-2 vegetarian continues to take courses in Judaism at B’nai Jeshurun, where he belongs to the young adult group and the men’s club, both sources of new friendships. In his mission to encourage compassion and enhance the well-being of life, he heads and is the managing director of the InterFaith Settlement Foundation. And, he said, he’s still looking to marry a nice Jewish girl.

Avrohom Yisroel Gold, 42, his wife Sora, their five sons and two daughters, ranging in age from 15-24, are a loving, bright family like no other. They are proud Orthodox Jews. Three of the Gold children are studying in Israel: sons Yitzchak and Yehuda are studying in yeshivot, while daughter Rivka is in an Orthodox girls’ seminary there. Yosef and Yirmeyahu (Jeremiah) are working in New York, while Dovid and Chana are students at Hebrew Academy of Cleveland.

Originally from North Carolina, Sora and Avrohom brought their family about 10 years ago to Cleveland, where Avrohom assumed his position as a computer information technologist at Nestlé in Solon. Since age 20, he had a yearning for deeper spiritual fulfillment in his life.

Some years ago, he took a course called “Exploring the World of the Jew” at a small Bible college. Gold said the course inspired him, particularly how Israel won the Yom Kippur War against great odds. Surely, he believed, that victory came with divine help. Sensing that the Jewish people still have this special relationship with God, Gold said, “I wanted in. I was determined not to be left out … and I began to seek answers.”

Gold continued his search for a closer relationship to God. Slowly and surely his heart drew him to the Jewish religion. Once he figured out that Judaism was where he belonged, Gold talked it over with Sora, and they decided it was beshert (predestined), he said.

In 2004, Sora and Avrohom and their seven children converted to Judaism at the Orthodox mikvah on Taylor Road, with Rabbis Boruch Hirschfeld, Ephraim Nisenbaum and Ephraim Spero conducting the ceremony. Gold has continued his Torah studies with many esteemed rabbis, including Rabbi Yisroel Miller of Canada, formerly of Pittsburgh, and Rabbi Yehuda Cahan of B’nai Torah in Beachwood. He said he is grateful for the support and generosity of the Orthodox community. Many families in the community have made his journey even more satisfying while preparing the children for b’nai mitzvah, he said.

The Beachwood resident said he feels blessed. “To the many rabbis, Hebrew Academy, Mosdos, community members and others who have helped to making our journey even more worth it, we are thankful, and may Hashem bless you, and may your reward be full,” he said.

Alberto Sardon, 55, an African-American detective with the Cleveland Police Department for the past 26 years, is also an eager student of the Jewish religion. Born in Detroit, he came to Cleveland with his parents and two brothers, who live in Bedford. Although he said the family practiced no religion, his parents enjoyed learning about the Eastern religions, as did he from his young teenage years. Sardon studied Hinduism, Christianity, Islam and Buddhism, even belonging to a Buddhist temple for a while. As the years rolled by, he became a world traveler and pondered, “Who am I in the scheme of life?”

In 1979, Sardon began to study Judaism and Torah with Rabbi Louis Engelberg at Taylor Road Synagogue, where he also learned how to daven, and he stayed with the Orthodox shul for three years. Sardon began to discuss conversion with Rabbi Ephraim Nisenbaum, with whom he studies at Waxman Chabad Center, and he took courses at Siegal College.

Now Sardon was in search of his Jewish self, he said. He found he felt most comfortable at Conservative shul B’nai Jeshurun Congregation and became a member. He is often called upon on Shabbos for an aliyah, chanting from the Torah in his resonant voice. “Chanting the trope (cantillation) of the Torah is the most enchanting form of music,” said Sardon, who also plays guitar. “The melody points to the meaning of the text.”

In 2008, Sardon converted to Judaism at the Goldberg Mikvah, with the B’nai Jeshurun rabbis at his side. “I study Torah every day,” he said.

Sardon has a briefcase full of important documents. He has done research on his family, discovering that in the last century, there were honored Sardon families in Brazil … and they were all Jewish. More than that, his copies of the 1920 census showed that there were Jewish Sardons in the U.S. as well, including his great-grandfather William Sardon.

Before leaving to pick up his 5-year-old son Angel from his parents’ home in Bedford, Sardon displays one more document: a newspaper clipping of a photo of Martin Luther King Jr. with Sardon’s uncle, the Rev. M. Earl Sardon.

“We have to know who we are, where we belong,” he said. “Hashem has a purpose for the Jewish people, and I feel in line with that purpose. I’m a happy man, a devoted Jew.”

James, 62, born in Indiana and raised in Michigan, became a reporter after getting his bachelor’s degree from Southwestern Michigan College. He came to Cleveland in 1981 to work as a videographer for WJW Channel 8, where he has been for 40 years. Catherine (née Barnett), a nice Jewish girl from Canton, met James at the 1984 Democratic National Convention in San Francisco; she was a delegate for the Gary Hart presidential campaign and a staff photographer for the Democratic Party.

The pair met up at the Cable Car Museum, where they found that they were both living on Cleveland’s West Side. By 1992, they were united in marriage, with Rabbi Susan Stone performing the ceremony. Looking forward to raising a family, James decided to convert to Judaism, which both he and Catherine said was strictly his own idea.

Holloway made weekly trips to Canton to study the Jewish religion and Torah with Rabbi John Spitzer. He converted to Judaism at the mikvah in Youngstown (as the mivkah in Cleveland was closed) with his wife and in-laws at his side. His late father and grandfather were Methodist ministers, as is his younger brother. Nonetheless, his entire family across the country wished him well, he said.

The Holloways’ daughter Jori Alitza attended The Agnon School and The Ratner School and is now a student at Beachwood High School. The family belongs to Congregation Shaarey Tikvah, where they attend Shabbat services and have made friends. James, who was inducted into the Broadcasting Hall of Fame in Akron in November 2011, is still busy at WJW, while Catherine’s business Etiquette Consulting Services continues to grow, he said.

“I’m just a Jewish person who happens to be a darker color,” Holloway said. “I stay low-key. I am not special or different. I am a proud, practicing Jew with a very happy family on all sides.”

“I always knew that my place was with God … and Temple Emanu El (whose name means ‘God is with us’) was where I finally made it home,” said Bobby Tinnon, 57. An active board member of Emanu El in Orange Village, he has attended erev Shabbat, Shabbat morning and holiday services at the Reform congregation for many years, going back to its previous location in University Heights.

Originally from Missouri by way of Milwaukee, Tinnon moved to Cleveland in 1972 and worked in a foundry on the West Side for about 10 years. He describes himself as spiritually attuned as a teenager, having been raised in a close-knit family of 12 children, headed by loving Baptist parents who instilled in him a strong belief in God. His father, who learned to read and write later in life, studied Bible constantly and with passion, Tinnon recalled, adding that his father knew the text better than most pastors and preachers.

“He recited the psalms of David and the wisdom of Solomon,” Tinnon said. “My growing Jewish soul was nurtured from his Baptist heart.”

Tinnon’s mother, now 90, impressed her son with these words: “To have faith in God is as that of a grain of a mustard seed.”

When Tinnon met his beloved Karin (pronounced Kareen), he realized they looked at the world through the same eyes. They married 10 years ago and decided to convert to Judaism together. Their beit din (rabbinic court) ceremony was conducted by Rabbi Daniel Roberts, Emanu El’s former spiritual leader, now rabbi emeritus, and its former Cantor Laurel Barr at The Charlotte Goldberg Community Mikvah, followed by a conversion conducted by Rabbi Andrew Paley.

Today the Tinnons live in Shaker Heights, with Karin working as a school psychologist in East Cleveland and Bobby as an investigator for the state of Ohio’s Home Care Waiver Program. They are the parents of Jaydon, 10, and Jacob, 9, who both are active in student activities at Temple Emanu El.

“My Hebrew name is Saul (after) the first king of Israel,” Tinnon said. “I am a proud, practicing Jew.”