Jews Of Color: ‘We Don’t Feel Comfortable In The Synagogue’ In the synagogue’s March newsletter, Ricki Gerger, president of Adas Israel Congregation in Washington, D.C., castigated those who ask fellow congregants who don’t “look like them” such questions as, “Are you Jewish?” “When did you become Jewish?” and “Tell me about your journey to Judaism.”

“I have never in my life been asked a question that challenges my identity as a Jew … but any-color-but-white Jews are asked about that all the time in just about any Jewish space,” she wrote. “Look, not everyone who comes to our synagogue is white. We have some folks here who don’t look like most of the people here. So? … In 2019, it’s time to get comfortable with the growing diversity of our kehillah,” or community.

The Conservative congregation’s rabbi, Aaron Alexander, estimated that about 10 percent of the synagogue’s 6,000 members are Jews of color.

Now, an analysis of Jewish population surveys commissioned by 25 national or local Jewish communities across the U.S. has concluded that Jews of color have been systematically undercounted for decades. And an analysis of the three most comprehensive studies available — the American Jewish Population Project (2013-2019), the 2017 San Francisco Bay Area Community Study, and the 2011 New York Community Study — has led researchers to estimate that Jews of color now represent an estimated 12 to 15 percent of American Jews.

“I hope our research will be used to inform community planning and resourcing, and that there will be a shift in the Jewish community to understand itself as multiracial,” said Ilana Kaufman, director of Jews of Color Field Building Initiative, the nonprofit group that commissioned the analysis.

The analysis was done by the Stanford Graduate School of Education and the University of San Francisco. Using calculations from Brandeis University’s American Jewish Population Project that put the total American Jewish population at 7.2 million, they estimate there are about 1 million Jews of color in the U.S.

Ari Kelman of Stanford University, the lead researcher, noted that the only Jewish population survey to “breakout Jews of color” was the New York study, which found that there were 87,000 households in which there were non-white, Hispanic or multiracial Jews out of the 694,000 Jewish households in the eight-county area, or 14 percent.

“We are fortunate that this study came out at a time when the American Jewish community is ready to start thinking about the internal diversity of the community,” he said.

Kaufman said the “research found that each generation of Jews is more racially diverse than the previous, which is consistent with the country.”

By the year 2050, demographers estimate that the U.S. will become majority minority, observed Diane Tobin, director of Be’chol Lashon in San Francisco, which she founded in 2000 after adopting an African-American child and beginning to raise him Jewish. Its goal is to strengthen Jewish identity by raising awareness about the ethnic, racial and cultural diversity of the American Jewish community. 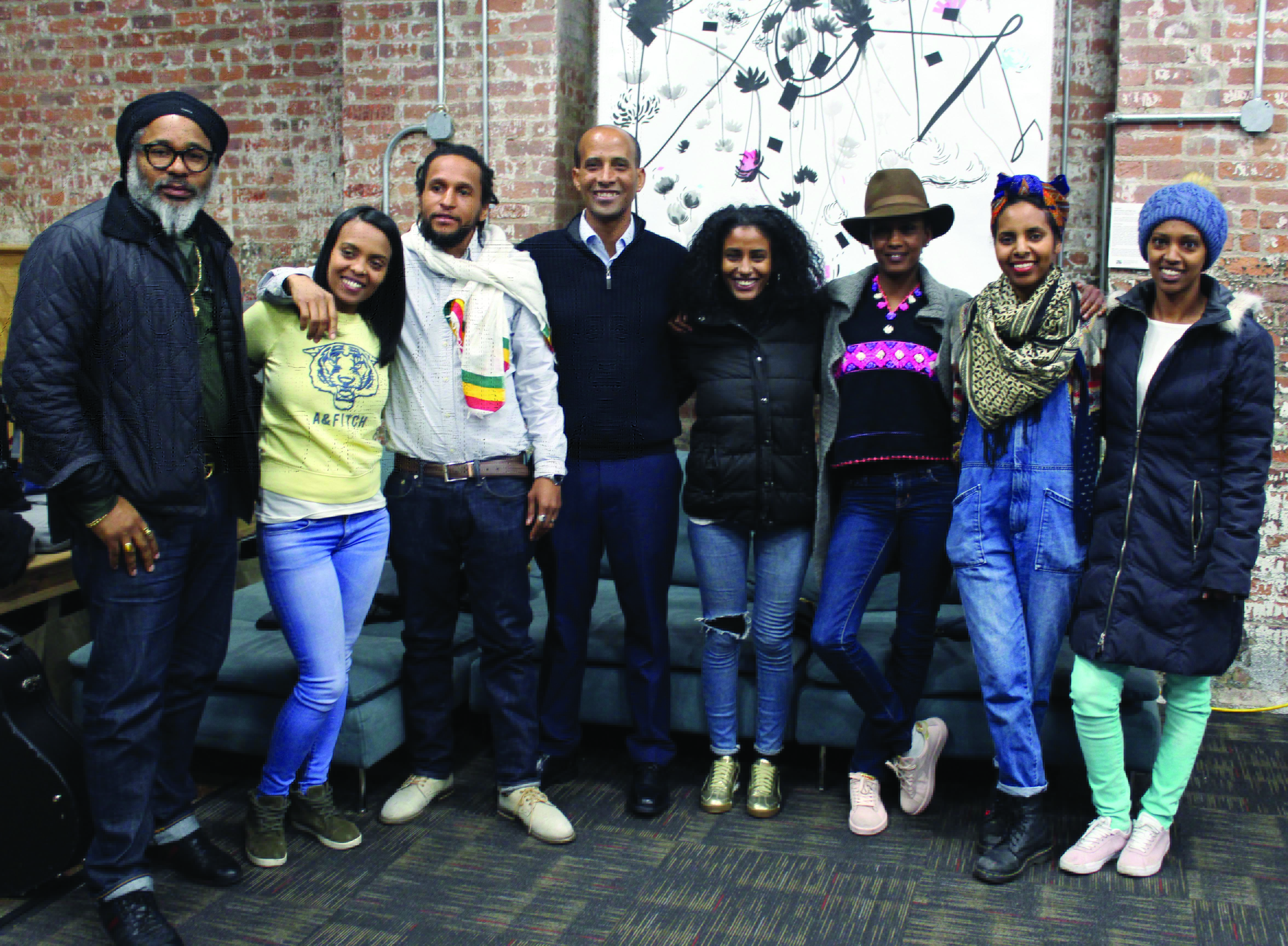 Nearly all of the Jewish population surveys commissioned in the past, Tobin observed, were focused on “the behaviors of Jews who populated our synagogues and JCCs and sought to learn what they wanted.”

But by zeroing in on Jews of color, the New York survey learned they are more likely to consider themselves “partially” Jewish, to be intermarried and “to feel uncomfortable at Jewish events and activities.”

“They are less likely to identify with a denomination, observe holidays, connect to Jewish institutions, or feel part of a Jewish community,” the survey continued. “And although they are a highly urban group, they are much more likely to live outside of the ‘primary’ neighborhoods of Jewish residence. Instead, they tend to reside in areas with relatively low Jewish density.”

Isaiah Rothstein, 30, an Orthodox rabbi who grew up in a multiracial Lubavitch family in upstate Monsey, said he knows “many Jews of color who were born Jewish and who take their Judaism and religious life very seriously. …  I also know Jews of color who don’t go to synagogue because they don’t feel a sense of belonging. It is changing a lot, but most Jews of color do not feel comfortable in the synagogue.”

The old joke about Goldstein going to synagogue to pray to God and Schwartz going to talk to Goldstein is very apropos, according to Rabbi Ruth Abusch-Magder, Be’chol Lashon’s education director, “because part of the reason we go is to be with people we know.”

Rabbi Lina Zerbarini, spiritual leader of Kehillath Shalom Synagogue in Cold Spring Harbor, agreed, saying: “People go where they feel they are not going to have issues, and it is not comfortable for people to walk into a synagogue and have people ask why they are there. When I adopted three black girls, the first question was whether I would raise them in the Jewish community because they would not see people like themselves in Jewish settings very much.”

‘I hope our research will be used to inform community planning and resourcing, and that there will be a shift in the Jewish community to understand itself as multiracial.’

“I would suggest that for most of our 4,000-year history we have not been white, and the experience we have in the U.S., where so many Jews think that Eastern European Ashkenazic Judaism is normative, is not,” she added.

The absence of Jews of color in the Jewish community is seen by Kaufman, director of the group that commissioned the study, as “in some ways a result of racism.” But Rabbi Angela Buchdahl, spiritual leader of Central Synagogue in Manhattan who was born in Korea to a Jewish American father and Korean Buddhist mother, said she believes that although there are “inherent biases, I don’t know if I would call it racism. There has been an Ashkenazi normative assumption by Jews in America that color our perception of who we are and what the Jewish community is.”

“We in America are an aberration, and we should see this [study] as a reclaiming of the mixed multitude of the mosaic of Jewish diversity that we have been since the beginning of our diaspora existence,” she added.

Rabbi Rothstein, who is rabbi-in-residence at Hazon, an environmental awareness group, said he welcomed the Jews of color initiative “to help integrate Jews of color into the wider Jewish community, because they have been unseen and marginalized for so many years. The initiative will both lift up and support Jews of color as they become more integrated into Jewish life and take leadership positions.”

Be’chol Lashon’s director of community engagement, Lindsey Newman, said she works with “Jews of color and ethnically diverse backgrounds to address their needs. I am hopeful because this conversation is now on the mainstream Jewish agenda in a way it has not been in the past. … We want to help build communities where Jews of color are seen and celebrated for the benefit of the entire Jewish community. A Jewish community that acknowledges its own diversity and is able to engage across differences is a stronger and more just Jewish community.”

Rabbi Abusch-Magder acknowledged that “we’re at the beginning of really understanding this and talking about this in the Jewish community. We don’t necessarily even know how to begin to unpack it.”

The Reform movement has been a leader in mounting outreach efforts to all in the Jewish community, according to Rabbi Rick Jacobs, president of the Union for Reform Judaism. He noted that a group called Audacious Hospitality was formed when he became president in 2012 to “engage groups of people who are often unrecognized and underserved in Jewish communal and institutional spaces, including Jews of color, LGBTQ Jews, Jews by choice, Jews with disabilities, interfaith couples and families, and more. …

“Audacious Hospitality is an ongoing invitation to be part of community – and a way to transform ourselves spiritually in the process. The URJ has an active team of experts that collaborates across the Reform movement’s work to offer resources, education and programs.”

Larger Conversation: If And When To Share Videos Of Violence