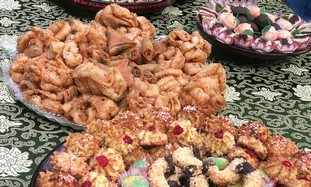 Two million Israelis are expected on Monday night to take part in the Mimouna, the traditional North African celebration of fraternity, abundance and good luck marked at the end of Pessah.

Sweet eats, including freshly baked “moufletas,” as well as dairy foods, fruits and vegetables, will be served on decorated tables at the main event in Rehovot and throughout homes nationwide, with the traditional “tirbechu vetisa’adu” blessing bestowing success on visitors and hosts alike.

The origins of the festival are not entirely clear.

According to historian Yigal Bin-Nun, the Moroccan Jewish Mimouna originated from “a feast day designed to appease a local she-devil.”

But over the years, Bin-Nun wrote in 2007, it adopted Jewish traits – epitomized by the importance of blessings recited over the delicacies consumed – as well as turning into “a symbol of Jewish- Muslim solidarity.

“Because the Jews could not keep hametz (leaven) in their homes during the Pessah holiday, it was customary to give all their flour, yeast and grain to their Muslim neighbors,” who would at the end of the holiday present their Jewish neighbors with flour and leavened goods.

This year, the World Federation of Moroccan Jewry decided that the theme of the celebrations would be the biblical command to “love the convert” in the wake of the recent maelstrom shaking Israeli society and world Jewry over the proposed conversion bill and the shadows of doubt cast over IDF conversions, which were eventually resolved.

Federation head Sam Ben- Chetrit noted that “we will be stressing the divine commandment– which appears in the Bible 45 times in different variations – to love, draw near, help and embrace the convert who wishes to join our people.

“This stands in contrast to the fact that only once are we commanded to love God. This shows the importance of the command [to love converts] for God’s sake.”

Ben-Chetrit also noted the planned “protest against extreme Orthodoxy, while quoting the rulings of North African sages, who taught and ruled in line with tolerance and lenience.”

In addition to the opening Rehovot event, which will be attended by senior politicians and public figures, a special panel on converts and conversion will take place in Ashkelon on Tuesday as part of the official Mimouna events. Senior rabbis involved in the conversion process will participate, as well as converts, who will tell their stories.

Federation spokesman Moti Elmaliach added that “the federation wishes to reiterate that accepting converts with open arms is imbedded in the heritage of North African Jewry. We all hope that the enlightened attitudes will return and replace the extreme haredi discourse we have
(Tags: Pesach, Moroccan Jews)