I had a joyous childhood, and an incredibly inspiring one as well, as a Japanese-Russian-Jewish girl growing up in Southern California during the 1970s. My life as a child was a colorful adventure filled with curious fascination and optimism, with everything intriguing and nothing mundane. I had my share of Omega-3s for decades before it became a health trend, with a bounty of fresh lox and bagels one day and whole salmons prepared Japanese-style the next.

Both my parents knew who they were and freely raised us as a sweet cocktail of two equally respected cultural worlds; and this is what made growing up magical rather than maddening. That we were descended from Japanese-Hawaiians and Russian-Jews with some Welsh and Scotch thrown in for an extra dose of levity did not overshadow our existence, but rather propelled us to be that much stronger as we rejoiced rather than rebelled in our differences.

From a young age I accepted the fact that I was the physical reflection of my Asian mother who had all of the refined, quiet grace in the world, and yet with the strange and perplexing juxtaposition of the acerbic wit and charm of my father who is a painter and poet.

The unique mixture of my parents played out in my siblings and me like a wild yet contained jazz orchestra, continually surprising us with adventures and then calming with both sureness and bonding to our parents’ vast differences and similarities. Just think Dave Brubeck mixed in with Jerry Lewis and any ballad sung by Ella Fitzgerald with Louie Armstrong and you have a pretty good picture.

A usual week was filled with cooking and learning how to be elegant with my mother, while my father introduced us to the works of great artists of our time. At the age of eight, I knew how to sew dresses by hand, draw from anatomical renderings by Michelangelo and often read T.S. Elliot’s poetry until dawn.

On the lighter side, I learned how to cook a whole rainbow trout Hawaiian-style and adored going to my Jewish grandfather’s house when he would make us the most delicious sweet and sour cabbage stew and homemade fudge you have ever tasted on the West Coast.

I fondly remember evenings when my father painted colorful still lifes in our living room using antique Japanese silk kimonos my mother had given him which were passed down from her mother, and Saturdays when my sisters and I learned to sing the songs of Gershwin and Cole Porter. Life was never boring, and whether we were eating sukiyaki out of bowls on tatami mats (Japanese straw) or visiting my father’s favorite deli, we were engaged and educated through variety.

This was not the confusing multi-religious home one might expect. My parents chose not to brings us to any temples at all and we had no religious upbringing from either our Jewish or Buddhist roots. This led me often to visit my friends’ homes for Friday Shabbat dinners and continually ask my mother about her practice of Buddhism as a child. I longed for more of a clear identity from either side and found myself reading the Old Testament on my own at the age of 9. My loving parents raised us to fend for ourselves in the way of finding our own spiritual paths.

There were times when I longed for the Buddhist tradition, as I have a need for lone spans of quiet when life has felt doomed and too filled with noise. Still, there were others when I only felt meaning and kinship with everything that seemed culturally Jewish, right down to my father’s philosophical nature that always made me look at life from fresh perspectives. 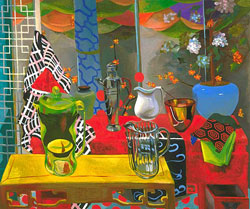 “Rhapsody,” one of Francesca’s father’s paintings

I didn’t think I was strange; on the contrary, other homes seemed bland in comparison as only one cultural theme was celebrated. It wasn’t until my teens when I began to feel neurotic, to put it mildly. At a time when all you want is to fit in, I learned my background was not considered exotic, but just downright alien. The slogan for my adolescence can be aptly echoed through Woody Allen when he said, “My only regret in life is that I am not somebody else.”

When asked questions such as “What are you?” I felt self-conscious and different, something no teen aspires to. Once a boy told me there was no such thing as a Japanese and Jewish person. And you think you have an identity crisis! For a time, I would have taken any identity at all, as long as I belonged to just one.

I had my share of friends during this turbulent time, but mostly they seemed to be other children who also felt lost as to who they were and where they fit in. For the most part I found solace in the arts and in any book by James Baldwin and the music of Billie Holiday and Aretha Franklin.

Life continued to be hard through college. When I finally married the Jewish mensch of the earth with all the best qualities I could find, when I was 26, I knew I had found my center of the universe. Meeting him on the newspaper staff in journalism school was only the beginning of a friendship that happily became more. I was genuinely somewhat relieved to find this nice Jewish man who helped make me feel more a part of the culture I had always felt I missed out on as a child, who at the same time had a deep respect for my Japanese heritage, as well.

My mother and father were elated that I had found somebody who was good, honest and strong. And although my father has never said it out loud, I know he is happy I married a nice Jewish guy. As for my mother, she never speaks about his background, but definitely approves of him so much so that I sometimes get the feeling she even likes him more than she likes me! Suddenly I was no longer struggling with the fact that I felt Jewish and looked Japanese. All I knew was that we were to begin a family of our own.

I do admit that I worried about what my dear fiancé’s East Coast relatives might say when they learned about me. I thought about what actress Anne Bancroft said about her engagement to filmmaker Mel Brooks, “When Mel told his Jewish mother he was marrying an Italian girl, she said: ‘Bring her over. I’ll be in the kitchen–with my head in the oven.'”

After our dear Reform rabbi married us, I finally felt like the nice Jewish girl with the Japanese mother I always knew I was. I was not asked to convert although someday I may. “Mazel tov!” our family and friends exclaimed as we rejoiced during the chair dance to Beethoven’s Fifth Symphony. As you might guess, the D.J. was not Jewish.

My daughters, who are being raised in the Jewish tradition in Northern California, where we live, often ask reflective questions about their Japanese heritage. Without hesitation, I tell them about Japanese-American uncles who fought against Japan during World War II and about a grandfather who grew up in the farm fields in Hawaii. I describe the aroma of my grandmother’s kitchen, which always presented a fish my grandfather had caught off the shores of the Kona coast, and I explain to my youngest that even with the large bright blue eyes of her Jewish grandmother, somewhere in her soul also rests some Japanese.

It is still a shock when I am asked questions and given “the look” in public. It is true I still find the need to display anything I think might be Jewish–like when visiting a favorite deli, or making sure a Japanese waitress knows that I am “one of them” – whatever that really even means.

We have made sure that our daughters know who they are, and with great curiosity, fascination and wonderment they explore both their Jewish and Japanese heritages–hopefully without feelings of confusion or alienation I sometimes felt growing up split between two cultures.

With naming ceremonies, lighting the candles on my husbands’ childhood menorah, incredible seders, and stories and lessons told from a large loving family, our daughters see themselves as Jewish with a sprinkle of Japanese for good measure.

It still surprises me when I am asked by strangers about who I am and where I come from. After all, isn’t that really the eternal, infinite and ultimate wonder that we as all humans struggle with?

Just the other night I joked I would be making matzah sushi for dinner. I’m still trying to invent this perfectly exotic dish while my family asks why I haven’t yet delivered on the promise. If anyone out there has a great recipe, let me know.