No Longer Intermarried But Still Chinese 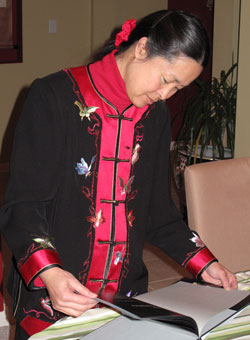 Debbie Burton is wearing her late maternal grandmother’s Chinese jacket on a visit to her cousins for Chinese New Year, January 2009. She is looking at a book of photos of the school in rural China her family established in her grandmother’s memory. She sent the photo with the note: “I feel that my Chinese family’s values of social justice and education mean that those same Jewish values particularly resonate for me.”

Because it is clear from my appearance that I am ethnically Chinese, total strangers will tell me all about their various Asian acquaintances. I think these people are trying to prove that they do not harbor racial prejudices. Frankly, I consider these experiences to be mildly annoying. But I can’t change my face, so I’ve accepted that this kind of experience is just something I will always have to deal with.

I also stand out in a synagogue because I do not “look Jewish”. My husband however is half Ashkenazi and thus does look more typically Jewish. So people have often taken one look at the two of us and assumed that we were intermarried. For the first 22 years of our marriage, they were right. But since I finally converted to Judaism, it is no longer the case, and I even have a real Jewish ketubah to prove that we now have a legitimate “Jewish marriage.”

But I’m still Chinese, so I still don’t look Jewish even though I am now. And people still sometimes react strangely because of my appearance, although I should point out that the strange or rude reactions are not typical, just memorable. In fact, if many Jews think it is surprising to see someone Chinese at synagogue, they are too polite to mention it. A few people have even assumed that I am a Jew by birth.

A student at a university Hillel Kabbalat Shabbat service told me very earnestly that he had read about and was excited to meet a Kaifeng Jew–meaning me. (A small Jewish community has existed in Kaifeng, China for hundreds of years.) I was sorry to disappoint him and explained that most Chinese Jews that he would meet in this country would be converts. These days I would add that they might also be adoptees, such as the two Chinese girls from the Orthodox congregation that meets in the same building as my congregation.

Before I converted, when people treated me differently because I was Chinese, I didn’t like it, but felt like maybe I “deserved” it because by marrying me my husband had violated the strong Jewish prohibition on intermarriage. I felt guilty that for some people, meeting me would only reinforce the idea that an Asian person in a synagogue was likely to be a non-Jewish spouse. I felt that it would make it that much harder for Jews who were Asian, but were born or raised their whole lives as Jews, like the adopted girls mentioned above, the three Korean adoptees in my congregation, or even my own children who were converted when they were young and are half-Chinese.

But just as my formal conversion signified my own acceptance of who I am religiously and spiritually, I’m coming to see that maybe it is not such a bad thing that my Chinese appearance means that I can’t so easily leave behind the fact that I was previously intermarried. A recent interaction that stemmed from my being Chinese even ended up being a positive experience.

My minyan meets in a Reform synagogue that is the simultaneous home for congregations from each of the three major movements (which are unaffiliated with each other, unlike minyanim at a university Hillel). I am a member of the lay-led egalitarian Conservative congregation that meets there, but one Shabbat a man from the Orthodox minyan started to talk to me as we left the building at the same time. He asked me about my ethnic background. When I replied “Chinese,” he went on to ask “And you’re Jewish?” Although I told him no, which was the technically correct answer, I added, “But I’ve been going to shul for 24 years.” I didn’t tell him that I was also studying with a rabbi for the purpose of conversion.

Some weeks later, this same man accosted me in the coat room after services and asked me why I had not converted if I had been attending synagogue for so long. I was embarrassed to be asked such a personal question with other people from both congregations around. I told him simply that the main reason was that I was afraid that my parents would take my conversion as a rejection of them. I assumed his questions stemmed from mere curiosity.

Then many months later, I saw him again and told him that I had formally converted to Judaism since we had last spoken. He seemed genuinely delighted by my news, but showed real sensitivity in telling me carefully that he was happy for me because it was something that I had clearly chosen for myself and that I was happy about it. Then he mentioned that his wife is Japanese. I thought to myself that of course she probably converted before they got married. But I had scarcely formulated the above thought when he totally surprised me by adding that his wife is not Jewish.

This news gave me a very different perspective on his questions. It sounded like his own wife was not interested in Judaism, at least for herself, and I think he wanted to understand what it was that caused me, another Asian non-Jew, to feel so drawn to Judaism. We didn’t talk for very long, but I think that he felt better to learn about another intermarriage in which the Jewish spouse was active in and committed to Judaism. And I was glad to learn about someone who self-identifies as Orthodox who is intermarried. I know from my own experience that intermarriage does not have to reflect a failure in a person’s Jewish identity, but it is such a prevalent assumption and it causes many Jews to automatically react negatively to intermarried couples.

So my looking Chinese had enabled that connection to be made because that man would never have approached me if I looked European. The experience also reminded me I don’t have to be ashamed of having been intermarried. Being Chinese makes my ethnicity more visible while obscuring my religious identity, which oddly enough pushes me to accept myself for both who I am now and who I was.

Debbie Burton was concurrently active in three Conservative synagogues before her conversion made her eligible for “official” membership: the Ner Tamid Ezra Habonim Egalitarian Minyan (a lay-led congregation in the Rogers Park neighborhood of Chicago), the Skokie Egalitarian Minyan (the lay-led “library minyan” of Ezra Habonim, the Niles Township Jewish Congregation, which is within walking distance of her home) and Beth Hillel Congregation Bnai Emunah (the synagogue where her children attended Hebrew school).