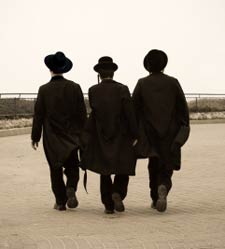 Reprinted from The (New York) Jewish Week with permission of the author. Originally published with the title “‘In the Mix’: More Than Noah Feldman.”

For many years after she married John, Ilana’s parents refused to speak to her.

Ashamed that their daughter, a yeshiva high school grad, had wed a non-Jew, they told none of their friends. And when they finally renewed contact, after Ilana and John’s second son was born, Ilana was urged to hide her children from her grandfather and tell him she was still single, for fear the news of her intermarriage would trigger a heart attack.

Her parents weren’t the only ones to cut her off. At one of the few family simchas to which Ilana was invited, her Orthodox cousins “literally looked at me and then looked away,” she recalls.

“I was dead to them,” Ilana, now in her late 40s, adds. “These were my cousins, who I’d grown up with and played on the beach with.”

In the liberal Jewish circles I frequent, this story sounds like something out of a Greek tragedy–Ilana’s family’s behavior so harsh that it can be hard to fathom in modern America. And her experience may be extreme even for the Orthodox world, where–in a “love the sinner, hate the sin” approach similar to the evolving attitude toward homosexuals–many are reporting a gradual softening toward individuals who have married out.

Nonetheless, while it has become unheard of even in haredi circles to uphold the once standard practice of sitting shiva for a child who intermarries, the Orthodox taboo against intermarriage remains intensely strong, even as a small, but hardly insignificant, number of Orthodox-raised Jews find themselves falling in love with gentiles.

One Modern Orthodox woman with whom I spoke noted that two of her daughters have close friends–both Orthodox, one a Stern College grad–who are seriously dating non-Jewish men. Last year, a 34-year-old Orthodox woman e-mailed me about her relationship with a Catholic man.

“I am struggling with this as it goes against everything I have ever been taught,” she wrote. “On the other hand, connecting with a loving, generous soul does not happen every day and I am hesitant to end the relationship.”

While certainly far less common in the Orthodox world than in secular and liberal circles, intermarriage–like homosexuality, sexual abuse and other uncomfortable phenomena–is often assumed to be rarer among the frum than it really is simply because it is kept so quiet.

Take Ilana’s family. Her father, a very traditional Conservative pulpit rabbi (most of the extended family and their friends identify as Orthodox, and Ilana and her sisters attended Orthodox schools and summer camps as children), left his job for a new shul where none of the congregants knew about her. And the Orthodox woman whose daughters’ friends are interdating? Not only were the friends uncomfortable being interviewed, even if I protected their identities and even though both are involved with men who are converting to Judaism, they requested that I not identify even the mother by name. And at Ilana’s insistence, I changed both her name and John’s name and omitted all identifying details.

When I ask Rabbi Avi Shafran, the spokesman for the fervently Orthodox Agudath Israel of America, if he knows any Orthodox Jews whose children have intermarried he insists he does not. While I don’t question his honesty, it makes me wonder whether he does in fact know such people, but that they are too ashamed or embarrassed to tell him.

Last summer, when Harvard law professor Noah Feldman wrote in The New York Times Magazine about his yeshiva high school ostracizing him for marrying a non-Jewish woman, he sparked a furor in the Orthodox community. The anger at Feldman’s “The Orthodox Paradox” article was in part attributable to Feldman’s often misleading critiques of Orthodox teachings, as well as his apparently false assumption that he and his then girlfriend were the only people cropped from a reunion photo. However, I suspect that part of the rage toward Feldman was not just a response to his accusations, but anger at him stating, in the most public of forums, that it is possible–even after 12 years of Orthodox Jewish education in one of the nation’s most prestigious day schools–to marry a gentile.

Despite the community’s lingering denial that intermarriage exists within its ranks, there are definitely rumblings of change.

Although he avoids commenting on how Orthodox family members who marry out are treated, Agudath Israel’s Rabbi Shafran notes in an e-mail to me that “intermarried couples from outside the community are, I think, increasingly seen by many Orthodox Jews as people not to be summarily rejected, at least if there is any chance of the non-Jewish partner’s sincere and halachic conversion.”

Naomi Mark, an Upper West Side psychotherapist who is Orthodox and has many Orthodox patients, says she too sees a shift away from shunning and in favor of encouraging conversion.

“There are so many examples of couples I’ve worked with where even if there’s not a conversion initially, over time … the non-Jewish partner begins to feel [more open to] conversion, especially when they’re doing it of their own accord and not because of pressure. Orthodox parents have witnessed that … and most rabbis will come down on the side of keeping the relationship [with an intermarried child] going.”

Mark notes that many gentiles who fall in love with Orthodox Jews are good candidates for conversion because often their partner’s strong Jewish background is part of what attracted them in the first place.

That is certainly the case with John. He enthusiastically agreed to send his and Ilana’s children to Conservative Jewish day schools. The couple divorced three years ago, and both are currently dating Jews; John’s new girlfriend is not only Orthodox but a Bible scholar.