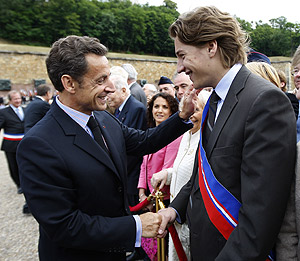 Solal, the son of Jean Sarkozy and Jessica Sebaoun, was born January 13 in the western Paris suburb of Neuilly-sur-Seine.

“It happened like all circumcisions, with a rabbi and a mohel,” Jean Balkany, the president’s friend, who was present at the brit for Solal, told Jewish radio Radio J.

President Sarkozy did not attend the brit, apparently because of work-related obligations, but Balkany said the president’s entire family was present, including his parents and brother.

Jessica Sebaoun is “a very observant Sephardic” Jew and the French president “sees no problem with that,” said Balkany, a member of the French parliament and mayor of Levallois-Perret, a town northwest of Paris.

Advertisement:
Balkany, who is Jew (his father was deported to Auschwitz), said that when he met Sarkozy more than 20 years ago, one of their first conversations was about their shared “Jewish origins.”

Sarkozy’s first grandchild was named Solal, after the hero of a novel by Swiss writer Albert Cohen. The first name Solal comes from the Hebrew ‘Solel’ which means “to carve a path,” showing the way for others and leading by example.

The French president, who turned 55 last month, has two sons from his first marriage – Jean and Pierre – and a third, 12-year-old Louis, from his second.

Nicolas Sarkozy has Jewish roots as his mother Andrée was born to the Mallah family, one of the oldest Jewish families of Salonika in northern Greece.