The Reel Deal: Follow filmmaker Lacey Schwartz behind the lens as she works to redefine the face of Judaism 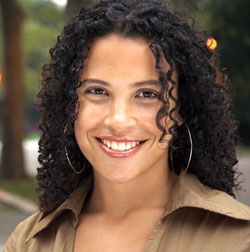 By way of daring documentaries and forward-thinking films, Lacey Schwartz seeks to inspire others to think “outside the box”–literally. “My documentary is about dual identity,” says Lacey of her upcoming film, cleverly titled to reference forms that instruct people to check just one box in regards to race. “Outside the Box focuses on my own story of growing up in a white Jewish family and finding out at the age of 18 that my biological father was black.”

As one of about 400,000 black Jews in America today, Lacey’s story reflects universal issues of diversity and acceptance. Growing up in the artsy town of Woodstock, N.Y., she was often asked by classmates whether she was black or white, despite having two white parents. Yet it wasn’t until her freshman year at Georgetown University that Lacey asked herself the same question and found out that her mother had an affair many years ago.

In Outside the Box, Lacey shares her journey since that discovery and interviews relatives who had never acknowledged that she was biracial. “Black Jews are caught between two often conflicting worlds,” states the film trailer. “Their stories reflect the struggle to find identity in a country that only allows you to check one box.”

As a filmmaker, Lacey hopes to tell those stories. “I can work with film, television and [the Internet] to help people think about a variety of different issues,” Lacey says. She first caught the movie-making bug as a student at Harvard Law School, where she made films like the autobiographical Schvartze in 2002 and Legally Black, Brown, Yellow and Red in 2003. “That was when I made the leap and deferred a job at a big corporate law firm to explore the idea of a film career,” remembers Lacey, who had initially dreamed of being an entertainment lawyer.

The gamble paid off, and today Lacey lives in New York, where she runs her own production company, Gold Glass Productions. Her film projects have often put her front and center for exciting new opportunities–in early 2008, she was tapped to join the staff of Be’Chol Lashon, a nonprofit organization devoted to Jewish diversity education. “It’s great because we share the mission of reflecting the true makeup of the Jewish community,” says Lacey. “My own personal connection is the Ashkenazi Americanized version–but that’s not the only kind out there.”

And hello, dream job: Lacey also gets to incorporate her love of film in her work with Be’Chol Lashon. In January, the organization sponsored the first-ever Ethiopian feature film to be shown at the American Sephardic Federation Film Festival. “My goal is for all of our programming to give people opportunities to interact and be social,” Lacey says.

Currently, she’s working with Be’Chol Lashon to create a new social networking website for Jews to meet and mingle online. “What I want more than anything is to see people brought together and see community being built,” Lacey says. “Soon I believe we’ll see a change in the face of the Jewish community and what people think of when they think ‘Jewish.'”