Why Is This Christmas Different From All Others? 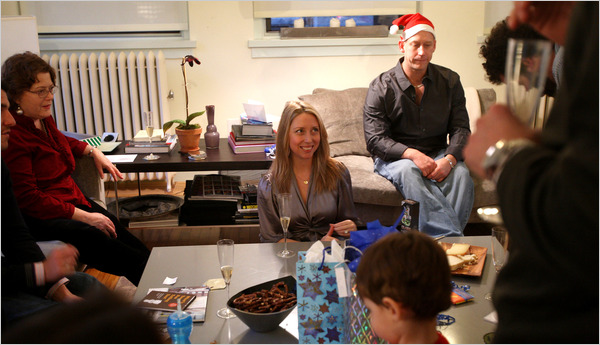 Charlotte Jett, 33, of Manhattan, converting to Judaism, had holiday guests including her mother, Patricia, at left, who came from Texas, and brother Carter.

She kept the tree, but decorated it exclusively in blue, white and silver. She invited friends for a festive dinner, but paused to light Sabbath candles.

For Charlotte Jett, this Christmas was unlike any other. For the first time, it was more her mother’s celebration than her own. Ms. Jett, who is 33 and in the process of converting to Judaism, was left to navigate the complicated path between the traditions she had grown up loving and the new identity she is shaping for her future.

She was not about to tell her father to toss out the stocking that her grandmother knitted for her when she was a baby, nor allow her mother to give away the piles of decorations her other grandmother had created over the years. But she also felt uncomfortable about putting them up in the Midtown apartment she shares with her fiancé, Alan Silver, who is Jewish.

“I am fully committed to becoming Jewish, so it’s been hard to know what I am supposed to do,” said Ms. Jett, who is in graduate school, studying to become a nutritionist. “There’s a piece of me that really feels the need to preserve something I had when I grew up.”

For thousands of people who convert to Judaism, Christmas is a difficult day of balancing what was once intimately theirs but now represents, in some ways, the essence of what they are giving up. The holiday brings up questions that often have less to do with theology than with culture and custom. Siblings wonder: Can we still give you gifts? Parents ask: Can I still fill your stocking? If the answers are no, does that signal something akin to betrayal?

For Jocelyn Getgen, a lawyer who is marrying a Jewish man next month, the completion of her conversion after Thanksgiving left her feeling strangely alone as she stared at the endless Christmas trees while walking down Broadway. For Juan Diego Santamaria, a 40-year-old court reporter, becoming Jewish meant abstaining from the roasted pig his family served at Christmas dinner in Elmhurst, Queens. And for Aliza Hausman, 29, it meant going with her sisters to see “Avatar” on Christmas Eve, movies having become a new family tradition since she converted in 2006.

Rabbi Leana Moritt, who has taught conversion class at the 92nd Street Y to more than 500 people over the past decade, said that many people speak of a loss of Christmas. Erin Leib Smokler, who tutors people studying for conversion and is working on a book about the subject, noted that conversion often causes separation in families, and said “Christmas becomes that divide.”

“It is one of many issues where they have to negotiate the thicket of multiple communities,” Ms. Smokler explained. “It is an opportunity to identify with their newly chosen community. They begin to appreciate the Christmas season as being a part of the minority.”

The most difficult — and most important — issue for Ms. Jett is the feelings of her mother, Patricia, who owns enough ornaments to decorate five trees and typically has her home in Plano, Tex., festooned with collections of snowmen and Santas. The elder Ms. Jett, who said she is fully supportive of her daughter’s decision to become Jewish, has in recent years become very active in the Methodist church.

“The thing is that I don’t want her to feel abandoned,” Ms. Jett said of her mother. “I am trying to make sure I respect her. Honoring your parents is a central part of Judaism too.”

Though Ms. Jett usually goes to her mother’s house for Christmas, this year, her mother came to New York instead, and Ms. Jett and Mr. Silver decided to invite several friends — they affectionately called them “Jewish orphans” — over for dinner. They planned a traditional Christmas menu of bourbon-glazed ham, mashed potatoes, roasted broccoli, Brussels sprouts, green beans and yams, cooked by Mr. Silver, who works for a real estate investment firm and is the designated chef in the relationship.

Ms. Getgen and her fiancé, Scott Kestenbaum, have spent the last decade visiting her family in Pennsylvania for Christmas, playing the role of a surreptitious Santa for the throng of nieces and nephews, laying out the gifts late at night and nibbling at the plate of cookies left out for evidence.

The family ritual has always delighted Ms. Getgen, and that did not change this year, a month after she completed the conversion process. And yet, she could not shake the feeling that something was different: this year, Christmas gave her an acute sense of being on the outside.

“Everything just feels more tangible and in my face — I notice the angels when I walk down Fifth Avenue and feel a bit more disconnected,” she said. “When I walked down Broadway, it felt like every pine tree had this strong scent, that they had just cut them. I had this moment of thinking, ‘wow, this is not a part of me anymore.’ ”

Many of those who convert to Judaism talk of feeling guilty around Christmas — as if listening to too many carols, or smiling too much at the words, might make them suspect. Ms. Hausman, who runs an online conversion support group on a blog, said that while she was going through the process several years ago, she felt as though she had to go to another part of town “just to watch some cheesy Christmas movie.”

“You’ve made this incredibly heavy and important life choice that becomes apparent in every way this time of year,” she said.

When Ms. Hausman used to call her Dominican grandmother to wish her “Feliz Navidad,” she would inevitably be asked how she was celebrating Christmas. And she and her sisters exchange Hanukkah gifts.

Mr. Santamaria said he knew he would have no problem participating in his family’s annual gift exchange at midnight on Christmas Eve. But he also knew he would stay silent during the novena, a traditional prayer recited in Spanish.

“I think it would be harder if I lived in Colombia, where everyone is doing Christmas,” he said. “At least here, there is some kind of diversity. It is not as though everyone celebrates Christmas.”

Correction: December 29, 2009
An article on Saturday about converts to Judaism and their struggles over Christmas misstated an account of interactions between Aliza Hausman and her relatives. Ms. Hausman, who converted several years ago, said her Dominican grandmother used to ask her how she was celebrating Christmas, not why she was not. Ms. Hausman said that on Christmas Day, she still calls her grandmother, not her mother. And Washington Heights is where Ms. Hausman grew up; it is not where her grandmother lives.