Impact on Jewish Charities Is Catastrophic 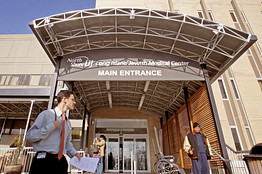 Such investors as the Long Island Jewish Medical Center in New Hyde Park, N.Y., had large amounts of money in funds overseen by Bernard Madoff.

Bernard L. Madoff’s alleged Ponzi scheme is proving disastrous to Jewish and other charities across the country, which have begun announcing funding shortfalls and unexpected shutdowns.

Programs for bone-marrow transplants, death-row inmates and human rights campaigns were threatened in the past few days as dozens of philanthropies took stock of their exposure to Mr. Madoff’s failed investment firm.

Mr. Madoff was a central player in Manhattan’s close-knit world of Jewish charities, serving both as a direct contributor and portfolio manager for individual foundations. Many of his clients are also a main funding source for charities, acting as the key donors who provide large checks necessary to keep them running.

Officials in the charity world said the effects would be felt for years, as donors curtail both current contributions and future commitments.

“In the Jewish world, we’ve just taken a major, central player, and introduced fear and uncertainty all over the system. It’s like finding out your brother is a murderer” said Gary Tobin, president of the Institute for Jewish and Community Research, which studies Jewish philanthropy. Dr. Tobin estimated the total amount of such giving in the U.S. to be as much as $5 billion annually.

In the most extreme cases, organizations affected by the alleged fraud are closing their doors. Some of these include charities supported by people who invested with Mr. Madoff. The JEHT Foundation, a New York-based organization focused on issues like criminal and juvenile justice, has stopped all grant-making and plans to shut down at the end of next month. Its major donors had essentially all of their money invested with the Madoff firm, said Robert Crane, president of the foundation. Programs run by the Robert I. Lappin Charitable Foundation and the Robert I. Lappin 1992 Supporting Foundation, which focus on Jewish youth, have been discontinued, according to a statement on the organizations’ Web site. The money used to fund the programs was invested with the Madoff firm, the statement said.

JEHT Foundation, which has given away roughly $25 million to $30 million annually in recent years, recently made a grant topping $4 million to Make Voting Work, a project to improve the U.S. election system run in partnership with the Pew Center for the States. Though JEHT recently made a partial payment on the grant, “at this point the balance won’t be forthcoming,” says JEHT’s Mr. Crane.

Other organizations that have received grants from JEHT include the Innocence Project, which is focused on exonerating wrongfully convicted people through DNA testing, and Human Rights First, which focuses on refugees fleeing persecution and other human-rights issues. “There’s significant hurt to go around,” says Mr. Crane. “Often when we fund a project we’re the sole source of funding.” He calls the situation “very upsetting.”

In some cases, donors are making good on Madoff-related losses sustained by charities. One donor to the North Shore-Long Island Jewish Health System who had stipulated that his contribution be invested with Madoff has now agreed to reimburse the health system for any losses, says North Shore-LIJ spokesman Terry Lynam. The health system’s total exposure to the Madoff firm, $5.7 million, represents less than 1% of its investment portfolio, Mr. Lynam says. Over the past 36 years, Bernard Madoff has contributed $216,000 to the health system, but “he would not be viewed as a large donor,” Mr. Lynam says.

Organizations that had no money invested with the Madoff firm are also affected. The Madoff Family Foundation has been a major donor to the Gift of Life Bone Marrow Foundation, based in Boca Raton, Fla. Gift of Life doesn’t have any money invested with the Madoff firm, but about one-third of the funds it spent on donor recruitment in recent years came from the Madoff foundation, says Jay Feinberg, Gift of Life’s executive director. And on Monday, Mr. Feinberg said he had been receiving calls all day from donors who said they wouldn’t be able to pledge to Gift of Life because of losses they had sustained in Madoff investments. Gift of Life was hoping to have a budget of about $7 million next year, but overall about $1.8 million of pledges has been affected by the Madoff issue, Mr. Feinberg said. The organization is now trying to raise the money from other sources. Investors and others exposed to losses include:

Other organizations are still trying to assess what, if any, damage has been done. Lawyers and accountants for Yeshiva University are investigating all aspects of Mr. Madoff’s relationship with the school, Yeshiva media relations director Hedy Shulman said in a statement. “We are shocked at this revelation,” Ms. Shulman said. “Bernard Madoff has tendered his resignation from all positions affiliated with the university and involvement with the university.”

Two philanthropic trends over recent years made the fund-raising world — both Jewish and non-Jewish — particularly vulnerable to an investment scam. One is the rise in charitable endowments, as institutions moved away from the practice of distributing all the money they raised each year to beneficiaries and began to invest a portion of it.

The second is the huge rise in family foundations, which typically have smaller advisory boards than larger charities and therefore may not get the same level of investing advice, philanthropic experts say.