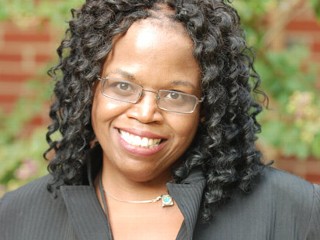 Alysa Stanton is set to become the first African-American female rabbi when she is ordained next month. (Courtesy Hebrew Union College-Jewish Institute of Religion)

Growing up in a black, Pentecostal family in Cleveland, Alysa Stanton never imagined the day when she would be preparing to be ordained as a rabbi.

But that day will come June 6 for the single mother who will be ordained by the Hebrew Union College-Jewish Institute of Religion in Cincinnati, becoming the first African-American female rabbi in the world.

“Ten years ago, if someone said I was going to be a rabbi, I would have laughed,” Stanton, 45, told ABCnews.com. “Me, a spiritual leader?”

Soon-to-be rabbi Stanton and her daughter Shana, 14, whom she adopted when she was 14 months old, will move to Greenville, N.C., in August, where Stanton will take her spot behind the pulpit at Congregation Bayt Shalom, which is both conservative and reform.

First Female Black Rabbi
Stanton, a reform Jew, said that her mother encouraged her to explore different religions as a young child and that, at the age of 9, she was already asking her priest to teach her about Kaballah, which focuses on the mystical aspect of Judaism.

Then, at age 10, she received her first Hebrew grammar book from her devout Christian uncle who made it a habit to attend Jewish ceremonies, as well as his own. By her early 20s, Stanton said she’d decided to convert.

“Most people convert because they’re marrying or dating someone who is Jewish or for another reason other than just picking that spiritual path,” Stanton said.

“I did so because it was the path for me,” she said. “Not only from a religious standpoint but from an ethical and social and communal standpoint, it was important to me

Twenty percent of the U.S. Jewish population, or about 1.2 million people, are diverse, meaning black, Asian, Latino or mixed race, according to the Institute for Jewish and Community Outreach in San Francisco.

“What’s important here is not that this is the first black woman rabbi but rather that it’s a symbol of a great change in the American Jewish community, which is becoming much more diverse because of things like conversions, intermarriage and adoption,” said Jonathan Sarna, an expert on U.S. Judaism at Brandeis University in Boston.

“That is a change that is really significant,” Sarna said. “That a community that even 50 years ago was rather monolithic, so much so that people thought they could look at someone and see if he ‘looked Jewish.’

“This is a reminder that the chosen people, so to speak, is not one race or another race but are in fact a range of races,” he said. “While Jews remain united by a bond of peoplehood as well as religion, that bond is not characterized in racial terms.”

But the Orthodox Jewish community, which has historically not permitted women to hold leadership roles in its congregations, is less accepting of Stanton’s upcoming ordination because of her sex.

“My general feeling, as a rabbi, is that there is a great deal of room for everyone to have spiritual fulfillment in Judaism but the public role of a rabbi is only for certain people and that excludes women,” Orthodox Rabbi Gil Student of New York City told ABCNews.com. “That’s based on tradition and enshrined in law.”

As for race, Student said that neither he nor the Orthodox Jewish community finds any problem with African-American Jews. “There is no such thing as skin color in Judaism, it doesn’t exist,” Student said.

Shlomah Shamos, the chief editor of the popular New York Orthodox Jewish news site Vosizneias.com, said that as the reform and conservative movements continue to ordain female rabbis, the Orthodox Jewish community is finding it increasingly difficult to associate with them.

Still, he added, “Orthodox Jews have the highest respect for women and they play the most important role – to raise a true Torah Jewish family.”

Michael Barondes, the president of the congregation in North Carolina where Stanton will work, said that he was pleasantly surprised that her hiring did not spark any controversy among congregants.

“I’m very proud of my community,” Barondes said. “[Stanton’s being a woman or being black] never came up in conversation. Obviously, we all know that’s unusual but when she got on the pulpit during her visit, it was totally comfortable.”

As for Stanton, she said that her family’s reaction to her conversion was ultimately positive, despite having a church pianist as a mother and a church choir director as a sister.

“I think at first they thought, ‘OK, she’s going through a phase of exploration,'” Stanton said.

When her family realized she was serious about Judaism, Stanton said they became “supportive” and “wonderful.”

Before studying to become a rabbi, Stanton had a career as a psychotherapist in Denver, Colo., specializing in grief and trauma. A first responder after the Columbine High School shooting in 1999, Stanton said that her experience counseling and communicating will benefit her as the leader of a congregation.

Asked whether she foresees any challenges in becoming the rabbi of a mostly-white congregation, Stanton said that she is not concerned about how her race may affect her career.

“There’s an adjustment period for any rabbi when they go to a new congregation,” Stanton said. “I am not anticipating that race will be a factor in their adjustment.

“My style and their style of worshipping will be the things we focus on, not the color of our skin.”

Stanton still anticipates some challenges in her new position.

“It’s difficult paving new ground,” she said. “It’s difficult being a first of anything, and although I’m honored and in awe that God has given me this responsibility, it’s one that I do not take lightly.”

Rabbi Sally Priesand knows all too well what it’s like to be a pioneer in the Jewish faith.

Priesand became the first ordained female rabbi in the United States in 1974, a time when many members of the Jewish community reserved the role of a congregation leader only for men.

“It is hard to be the first,” said Priesand, who retired in 2006 from the New Jersey congregation where she worked for 25 years. “I was well aware everyone would judge the concept of female rabbis by what I did.”

Priesand said that she spent much of her last year in rabbinical school traveling the country so that people would see that “she was a human like everyone else,” a decision she said was important to gaining the trust and respect of her congregants.

“Every time I preached a sermon or officiated a bar or bat mitvah for many people, it was the first time they had ever interacted with a female rabbi,” she said. “I knew that when they left that would be their opinion of a female rabbi.”

When she was faced with people who believed she was filling a role that would be better suited for a man, Priesand said she learned to listen.

“I had a rule that I would never argue with anyone who thought women shouldn’t be rabbis,” Priesand said. “I would listen and I would say, ‘Thank you so much for your opinion’ and I would walk away.”

“I don’t believe you can really accomplish your goal by arguing, you just have to do it,” she said, “and then people judge you for who you are as a person.”

Asked what advice she’d give Stanton, whom she plans to see ordained next month in Ohio, Priesand said, “Be yourself.”

“When you’re the first of something, there’s a lot of notoriety that goes a long with that and it’s easy to lose your focus along the way,” she said.

“When I was ordained, everyone thought that they knew what I should do and how I should dress and how I should be and I’m rather proud of the fact that I’ve always been able to be myself,” she said. “You cannot please everyone and so you have to be true to your own standards.”
(Tags: Jewish, Woman, Black, Rabbi)