The woman and the man guilty of adultery or fornication, flog each of them with 100 stripes: Let no compassion move you in their case, in a matter prescribed by Allah, if you believe in Allah and the Last Day. (Koran 24:2) 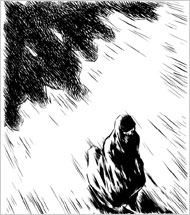 In the last few weeks, in three widely publicized episodes, we have seen Islamic justice enacted in ways that should make Muslim moderates rise up in horror.

A 20-year-old woman from Qatif, Saudi Arabia, reported that she had been abducted by several men and repeatedly raped. But judges found the victim herself to be guilty. Her crime is called “mingling”: when she was abducted, she was in a car with a man not related to her by blood or marriage, and in Saudi Arabia, that is illegal. Last month, she was sentenced to six months in prison and 200 lashes with a bamboo cane.

Two hundred lashes are enough to kill a strong man. Women usually receive no more than 30 lashes at a time, which means that for seven weeks the “girl from Qatif,” as she’s usually described in news articles, will dread her next session with Islamic justice. When she is released, her life will certainly never return to normal: already there have been reports that her brother has tried to kill her because her ?crime? has tarnished her family’s honor.

We also saw Islamic justice in action in Sudan, when a 54-year-old British teacher named Gillian Gibbons was sentenced to 15 days in jail before the government pardoned her this week; she could have faced 40 lashes. When she began a reading project with her class involving a teddy bear, Ms. Gibbons suggested the children choose a name for it. They chose Muhammad; she let them do it. This was deemed to be blasphemy.

Then there’s Taslima Nasreen, the 45-year-old Bangladeshi writer who bravely defends women’s rights in the Muslim world. Forced to flee Bangladesh, she has been living in India. But Muslim groups there want her expelled, and one has offered 500,000 rupees for her head. In August she was assaulted by Muslim militants in Hyderabad, and in recent weeks she has had to leave Calcutta and then Rajasthan. Taslima Nasreen’s visa expires next year, and she fears she will not be allowed to live in India again.

It is often said that Islam has been “hijacked” by a small extremist group of radical fundamentalists. The vast majority of Muslims are said to be moderates.

But where are the moderates? Where are the Muslim voices raised over the terrible injustice of incidents like these? How many Muslims are willing to stand up and say, in the case of the girl from Qatif, that this manner of justice is appalling, brutal and bigoted – and that no matter who said it was the right thing to do, and how long ago it was said, this should no longer be done?

Usually, Muslim groups like the Organization of the Islamic Conference are quick to defend any affront to the image of Islam. The organization, which represents 57 Muslim states, sent four ambassadors to the leader of my political party in the Netherlands asking him to expel me from Parliament after I gave a newspaper interview in 2003 noting that by Western standards some of the Prophet Muhammad’s behavior would be unconscionable. A few years later, Muslim ambassadors to Denmark protested the cartoons of Muhammad and demanded that their perpetrators be prosecuted.

But while the incidents in Saudi Arabia, Sudan and India have done more to damage the image of Islamic justice than a dozen cartoons depicting the Prophet Muhammad, the organizations that lined up to protest the hideous Danish offense to Islam are quiet now.

I wish there were more Islamic moderates. For example, I would welcome some guidance from that famous Muslim theologian of moderation, Tariq Ramadan. But when there is true suffering, real cruelty in the name of Islam, we hear, first, denial from all these organizations that are so concerned about Islam’s image. We hear that violence is not in the Koran, that Islam means peace, that this is a hijacking by extremists and a smear campaign and so on. But the evidence mounts up.

Islamic justice is a proud institution, one to which more than a billion people subscribe, at least in theory, and in the heart of the Islamic world it is the law of the land. But take a look at the verse above: more compelling even than the order to flog adulterers is the command that the believer show no compassion. It is this order to choose Allah above his sense of conscience and compassion that imprisons the Muslim in a mindset that is archaic and extreme.

If moderate Muslims believe there should be no compassion shown to the girl from Qatif, then what exactly makes them so moderate?

When a “moderate” Muslim’s sense of compassion and conscience collides with matters prescribed by Allah, he should choose compassion. Unless that happens much more widely, a moderate Islam will remain wishful thinking.