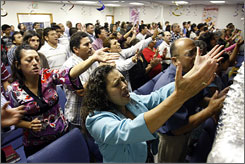 When Randy Brown visited Hispanic Pentecostal congregations in Southern California, he was stunned by displays of Star-of-David flags, fervent prayers for peace in Israel and Hebrew words in their church names.

Brown, an executive with the American Jewish Committee, saw an opportunity to build Jewish-Latino relations and combat anti-Semitism among the immigrants, who generally have little exposure to Jews in their predominantly Roman Catholic native countries.

“I was amazed at the affinity these congregations have for Israel,” recalled Brown, director of interreligious affairs for the Los Angeles chapter of the Jewish advocacy group. “I wanted to take this to the next level.”

The Los Angeles office has since worked to forge new bonds: They recently took a group of Pentecostal Hispanic pastors to Israel, offered a course called “The Essence of Judaism” at a Southern California Pentecostal seminary, and invited Hispanic pastors and their families to Passover seders and Sukkot harvest celebrations.

“We have many things in common,” said Pastor Ramiro Lopez of the Iglesia Vida Abundante in San Bernardino. “Now I can understand Israel from more than a biblical perspective and I have more of a commitment to Israel.”

While Latino immigrants in the US are mostly Catholic, evangelicals comprise a notable 15 percent of the population, according to a recent study by the Pew Hispanic Project and the Pew Forum on Religion & Public Life. Many are Pentecostal, one of the fastest-growing streams of world Christianity, known for spirit-filled worship and speaking in tongues.

A 2007 survey by the Anti-Defamation League found a higher-rate of anti-Semitic views among foreign-born Latinos than among US-born Hispanics. Twenty-nine percent of Latinos born elsewhere harbor anti-Jewish views, while the rate for Hispanics born in the country ? and for the US population in general ? was 15%, the study found.

The 2007 numbers are slightly lower than those in a 2005 survey, but Jewish leaders are worried all the same, especially as Latin Americans are expected to become 29 percent of the national population by 2050.

Latin American countries are overwhelmingly Roman Catholic and are steeped in a five-century-old tradition of a church that wields much influence. With the exception of Argentina, Jewish communities in Latin America are tiny and tend to keep a low profile.

By contrast, US Jewish and Catholic leaders have held high-level interfaith talks for years. Several Catholic colleges in the country have centers for Jewish-Catholic understanding, and US bishops heavily emphasize the Second Vatican Council teaching that Jews are not collectively responsible for the Crucifixion. That outlook influences not just Catholics, but also other Christians in the US.

‘We have to be grateful to the Jewish people’
Pastor Tony Solorzano, who heads the Iglesia Llamada Final, a 5,000-member congregation in Downey and Inglewood, said some Latinos simply need more education about Judaism to dispel stereotypes. Some consider Jews “Christ-killers.”

“Not many think that way, but some have heard this,” Lopez said. “We tell them there’s a plan according to God’s will. We have to be grateful to the Jewish people because Jesus was Jewish.”

Pentecostals, who interpret the Bible literally, believe God promised the Jewish people the historic land of Israel. Many consider the modern state of Israel a fulfillment of biblical prophecy ? and a precondition of the second coming of Jesus Christ.

“I really believe that promise,” Lopez said. “Every day we pray for Jerusalem with our hands to the east.”

Jewish leaders are building on Pentecostal pro-Israel sentiment to dispel stereotypes between both groups. Many Jewish groups in recent years have accepted such support without questioning the theology behind it, which says that all people, including Jews, will ultimately accept Christ.

“It’s a new and emerging connection that didn’t exist with the Catholic Church,” said Salberg of the Anti-Defamation League.

Pentecostal congregations, often housed in storefronts filled with rows of folding chairs, have become fixtures in Latino neighborhoods across the United States, as well as Latin America. Pastors tend to be influential opinion-makers in their congregations and some, like Lopez, have radio programs or stations, expanding their reach.

At the Latin University of Theology in Torrance, which trains Pentecostal pastors, many of the students in Brown’s Spanish-language “Essence of Judaism” course hail from Latin American countries. He hopes they’ll return home with new knowledge about Jews and Judaism to change negative images and misperceptions.

Nationally, the American Jewish Committee has formed a Latino and Latin American Institute, and in 2001 convened the first Latino-Jewish Leadership Summit in Washington, DC, to discuss common policy concerns such as immigration. Along with the Los Angeles office, several local chapters of the nonprofit are reaching out to Latinos, according to Ken Bandler, the group’s national spokesman.

Pastor Richard Escobedo holds two sessions weekly to pray for Israel at his 500-member Centro Palabra de Fe church in Compton, where he has an Israeli flag on display, has held Passover seders and preaches that “love thy neighbor” includes Jews and others. Many Pentecostals wear Star of David pendants and other paraphernalia, he said.

Engaging with Jews, he said, “is opening our eyes to how Jesus himself was taught.”