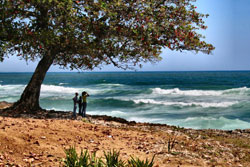 My husband, a Jew-by-birth, had been to many Jewish weddings. As a Jew-by-choice, I had only been to one. Ever. I remembered nothing except the feeling that I didn’t know when to stand, when to sit, where to lean, what to wear and where to look. It was uncomfortable, and that wasn’t the feeling I wanted my guests to have at my wedding.

The rabbi who was marrying us had us both read The Jewish Way in Love and Marriage by Maurice Lamm, but I was the one who needed clarification on some of the finer points of the Jewish wedding ceremony. Still, I found it fitting that Maurice Lamm should enter my life just then. He had taught me to become a Jew through his book Becoming a Jew, and he was going to teach me how to be a Jewish wife, too.

Our rabbi was very hands-on. He wanted us to feel comfortable talking to him about tweaking different parts of the ceremony to suit our personalities and our relationship. My future husband found this hilarious when he realized that our rather understanding rabbi didn’t understand that I couldn’t imagine “tweaking” something that I had never experienced. I told them both that I just wanted “a regular Jewish wedding.” But as the wedding planning drudged on, I realized this wasn’t true.

I wanted my wedding to both spiritually and physically bring together two sides of my world: the Jewish world I had embraced and the Dominican world where I had been raised. It suddenly became incredibly, overwhelmingly important to me that people realize they were coming to a Dominican Jewish girl’s wedding. And with three months to plan this shindig, we were at a loss for where to start.

The best way to start to incorporate our multicultural reality into our multicultural wedding would have been to start with a list of all the parts and parcels of a wedding we could imbue with a Dominican flavor. But we weren’t organized, so we went with our intuition. What did we think of when we thought about how Dominican culture affected our lives?

Music! My husband had heard me rock out to enough Spanish language tunes to start asking Jewish bands whether they could infuse their playlists with some Spanish blood. When one band started asking us for suggestions for actual songs, we were stumped. Luckily, that same band came to our rescue, offering us a list of Spanish ditties that made me think of “home,” the culture that intertwined itself with my adopted American Jewish culture. We ordered some ballads, salsa, merengue, and none of that “loathsome” bachata music my father loves.

Food! I wasn’t very optimistic about finding a kosher caterer who could cook my favorite Dominican dishes. “What would they know about Dominican food?” wondered this Jewish bridezilla. Again, it was “ask and ye shall receive.” The caterer bombarded us with a list of delicacies from all over the Caribbean food palette. I did not have to sacrifice my love of rice, beans and plantains at my wedding! I hoped that discovering plantains (and other surprises) at the buffet would be a life preserver for Hispanic guests feeling lost in the sea of Jewish guests.

Favors! Since my first party when my mother tied a bow with my name and the occasion’s date to a figurine, party favors have been synonymous with Dominican fiestas (parties). But I couldn’t think of anything that I could give away to my guests that would be cost effective without being “touristy.” In desperation, I pondered having my cousins in the Dominican Republic ship 200 maracas overseas. In the end, the maracas weren’t meant to be. Instead, Jewish and non-Jewish guests alike walked away with benchers, the book of Jewish blessings given away at Orthodox Jewish weddings. If it had been up to me, there would have been little Dominican caricatures on the book’s soft cover–a girl can dream, right? A non-Jewish coworker later surprised me by pulling out my bencher at a mutual friend’s wedding. He thought it would be helpful at his “second Orthodox Jewish wedding ever.”

Okay, when I think of Dominicans, I think of ? the Dominican Republic! And I flirted with the idea of dragging all the New Yorkers and all the (Los) Angelinos out to the Caribbean for a destination wedding. It would have helped my relatives bypass the need for visas. But my husband’s baby blue eyes pleaded with my saner attributes. We finally settled instead on honeymooning in Santo Domingo and visiting most of my relatives then. But I promise you, folks, if I have my way, I’m renewing my vows barefoot on a beach with merengue and salsa in the background.

When planning your big fat multicultural wedding, it’s best to follow your heart and keep your guests in mind. Thoughtful wedding helpers created a pamphlet so that all our guests could follow along with the Jewish wedding ceremony. But a bride and groom could easily draw up a similar informative pamphlet to explain any traditional aspects of their wedding. We kept the guests on their toes at our wedding, Jewish and non-Jewish guests alike “never knew what to expect,” but we wanted everyone to feel a part of our big day.

With flowers, colors, invitations and cakes, there are plenty of ways to incorporate some ethnic style into any wedding. A little birdie informed me that I could have ordered “white groom and brown bride” cake toppers: Jewish groom and Hispanic bride figurines to dance on my creamy cake. With that kind of creativity out there, there’s no stopping us from putting together my daughter’s own big fat multicultural Jewish wedding. Well, except that she hasn’t been born yet.