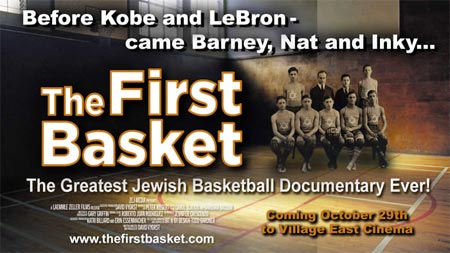 Long before Kobe Bryant, Michael Jordan and Shaquille O’Neal dominated men’s professional basketball, Jewish basketball teams were all the rage in the early 20th century. A new documentary called “First Basket” takes a look at this piece of basketball history, and how it shaped the start of the NBA. Host Michel Martin speaks with the film’s director David Vyorst.

And now we go from looking at basketballs future to looking back at its history.

Long before Kobe, LeBron and Shaq, there was Ossie as a Schectman, Nat as in Holman and Sammy as in Kaplan. Who were they? Well, they were some of the biggest names in basketball back in the first half of the 20th century. At that time, basketball was the game among the children of European Jewish immigrants. Teams of rosters that were made up entirely of Jewish players traveled up and down East Coast. And Jewish players, coaches and owners played a vital role in the start of todays NBA.

A new documentary called The First Basket, tells us mostly forgotten part of American sports history and the producer and the director of the film David Vyorst is with us now. Welcome. Thank you for joining us.

Mr. DAVID VYORST (Director, The First Basket): And thank you, Michel. Its a pleasure to be here.

MARTIN: How did you hear about this?

Mr. VYORST: I heard about this, well firstly, through my father who is a big basketball fan. And he wasnt really a sports fan, in general. He never really took me to baseball games, but he would take Knick games and he talked about how it was very popular when he was growing up. And then more than 10 years ago, around the 50th anniversary of the NBA, I heard a little piece on the radio where they interviewed some of the early players and they were all Jewish. And it just picked my imagination.

MARTIN: Where does the title of the film come from, The First Basket? Who scored the first basket?

Mr. VYORST: The eponymous first basket was scored by Ossie Schectman of the New York Knicks on November 1st of 1946. That turned out to be the first basket in NBA history.

MARTIN: You interviewed a number of people who talk about just how much basketball was the thing in Jewish neighborhoods in New York City and heres just a short clip from the film.

(Soundbite of movie, The First Basket)

Mr. RED AUERBACH (Actor): (As Himself) I grew up in Williamsburg section of Brooklyn and basketball was the sport because there was no way out there. You couldnt play football. They had no fields for baseball. Everything was basketball.

Mr. JERRY FLEISHMAN (Former Professional Basketball Player): We were poor. We never had a basketball. So we’d take newspapers and tied the newspapers together and throw through the lower rung on the apartment house fire escape.

MARTIN: Makes sense to me. Who was talking, by the way, in that clip?

MARTIN: And who is Ossie Schectman?

Mr. VYORST: Ossie Schectman scored the first basket in the NBA. He was a great college star in the 1940s at Long Island University, and he was on the original Knick team.

MARTIN: You mentioned in the film that basketball was popular with Jewish kids in part because it was a way to assimilate. You said that there were a lot of Jewish kids in the settlement houses. This was kind of the common sport. On the other hand, there were all-Jewish teams, a lot of the kids had jerseys with their names written in Hebrew. So, why did they have all-Jewish teams? It wasnt because other kids wouldnt play with them, was it?

Mr. VYORST: No, not at all. But at the turn of the 20th century, most of the Jewish people who came into the country moved into the lowery side of Manhattan. So people lived within ethnic communities, largely. And many of the teams grew out of those communities. Whereas sports is a way where you want to fit in with the culture writ large, basketball – the way that these kids played basketball, they were able to play basketball, kind of become American, but on their own terms. And one of the fascinating things of the story is that a lot of the teams that became really big teams, even one or two of the NBA teams grew out of these community leagues.

Mr. VYORST: No. I would hark back to your other question. That would be a proud term. I mean, I think basketball is cool. And there’s a – you know, theres kind of a basketball chic and a basketball hip. So I think Jewish people are proud of playing basketball and their basketball heritage. But Jew ball’s a type of basketball that I think was best exemplified by the 1970s New York Knicks, which is a team that I worshipped when I grew up, the Willis Reed-Walt Frazier teams that, you know, won two championships. And it stresses team play, five men playing together, tough defense, never slacking on defense and always hitting the open man on offense.

That style ball, we say in the film, originated kind of in the settlement house leagues, was kind of developed by Nat Holman, the famous coach of City College of New York in the ’20s, ’30s and ’40s, and passed on to Red Holzman, who played for Holman at CCNY on the Knicks. And Phil Jackson, the coach of the Lakers today, of course, played for Red Holzmans Knicks. So we’d like to think that the influence – the kind of genealogy of Jewish basketball, the essence of Jewish basketball is spread from one generation to the next.

MARTIN: I see that. Were just going to play a short clip. Let me just play a clip from the film.

(Soundbite of movie, “The First Basket”)

Unidentified Man: There was a city style of game. A lot of passing, a lot of ball-handling, a lot of working off the top of circle, off the pick, going back door, weaving, using the ball, every men working together.

Mr. AUERBACH: These gyms are so small that there was a premium on passing and cutting, and moving and shifting and coordinated motion.

MARTIN: Come on, because they were small?

Mr. VYORST: Yeah. The gyms are small, and I think the players were small.

Mr. VYORST: Hes saying because they didnt have a lot of space to play in. He’s not saying that because the guys were small.

MARTIN: Okay, thanks for clearing that up.

MARTIN: You say the point shaving scandal of 1951 is the beginning of the end of an era for Jewish basketball. Could you just remind us of what happened, and why was it so devastating?

Mr. VYORST: In the 1950 and ’51, season of the City College of New York won both the NCAA and the NIT Championships. This was unheard of. It – I think its the only time it ever happened. At that time, the NIT Championship was much bigger and more important. By half year later, several players from that team were arrested for shaving points, which means taking money from gamblers to lose by a certain amount and not win by the point spread. This had been going on all over college basketball, and it blew up into a big scandal. For people, you know, of that era, was like bigger than Watergate.

It was huge. And in the investigations and all the things that ensued, several of the teams – the college teams in New York downsized or even got rid of their basketball programs. So before 1951, New York was the Mecca of college basketball. And so, with these schools, the kind of factories of Jewish – you know, the places that produced the, you know, Jewish basketball college programs are all downsized and closed. So theres no kind of central Mecca of Jewish basketball. But at the same time, you have a massive suburban migration after World War II of Jewish people to the suburbs. These two factors, you know, from what we found, were what caused the decline in Jewish…

MARTIN: I guess you meant – because that was going to be my next question. You say that by the 1960s, Jewish players largely start to disappear from the game. Why? Do you think it was because of migration patterns? Kids started moving out from the city? There’s still gyms in the suburbs, though. Why is that?

Mr. VYORST: Well, it’s not as intense. I mean, I think basketball’s more intense in inner cities. The suburban migration might have taken away that edge.

MARTIN: There are only two Jewish players currently in the league, as I understand it – Jordan Farmar of the Lakers and Omri Caspi, who plays for the Portland Trail Blazers. And Omri has the distinction of being the first Israeli to play in the NBA. So how – why is that? Is that – Israel now a big spot for basketball – big burgeoning basketball power?

Mr. VYORST: Basketball’s huge in Israel. And it kind of is the conclusion of the whole point to the film. And its such a closing chapter of the film in so many ways, and it exemplifies the whole point that, you know, the Jewish peoples love of basketball would be played out by the Jewish nation loving basketball. Their top team, Maccabi Tel Aviv, is one of the top teams in Europe. In the last 20 years, theyve won something like five European titles. The European leagues are becoming not quite on par, but theyre almost catching up with the NBA. And basketball has globalized to the extent where now, lots of players from European leagues play in the NBA.

MARTIN: So now its kind of coming full circle, in a way.

Mr. VYORST: People of that generation, you know, get a twinkle on their eyes when they talk about these things. And they just – the film means a lot to them. And thats very heartwarming to me. But I get a lot of things like, I dont even like basketball and I found that film very interesting.

MARTIN: David Vyorst wrote, directed, and produced the documentary, “The First Basket.” It describes the history of American Jews in basketball from the history to the present day. Its available on a festival circuit, and also on DVD. And he was kind enough to step by our Washington, D.C. Studio. Thank you so much for joining us.

Mr. VYORST: Thanks for having me.