Pope Reaching Out To Jews With Synagogue Visit 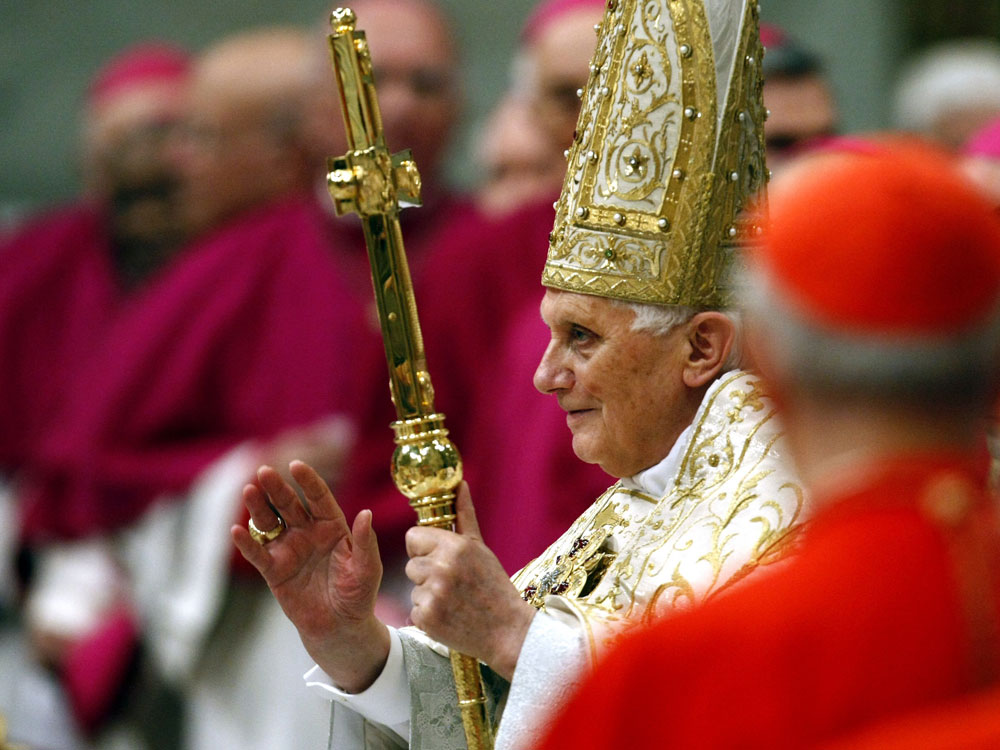 Pope Benedict XVI, shown here on Dec. 31 at the Vatican’s St. Peter’s Basilica, is scheduled to visit Rome’s main synagogue this weekend. Recent moves by the pontiff have raised tensions with Jews — in particular Roman Jews, who suffered amid Pope Pius XII’s silence during World War II. Pope Benedict has put his wartime predecessor on the track to sainthood.

Pope Benedict XVI will visit Rome’s main synagogue Sunday. The event comes amid tensions in Jewish-Catholic relations over a series of recent Vatican decisions, which have added to the stormy relationship between Roman Jews and the pontiffs over the centuries.

At the Great Synagogue of Rome, workers are preparing for the pope’s visit, but guided tours of the place of worship are still under way.

Yael Calo’, a guide at the synagogue, says Jews arrived in Rome long before the birth of Christ.

“We have 22 centuries of uninterrupted presence in Rome,” Calo’ says.

Under papal rule, persecution of Jews alternated with relative calm — until 1555, when Pope Paul IV ruled that they should not prosper alongside Christians. As infidels, he said, God condemned them to eternal servitude.

He ordered that all Jews in the Rome region be restricted to an 8-acre ghetto. Jews were not allowed to pursue education or practice professions, and could leave the ghetto only between sunrise and sunset.

“The main reason [for] the ghetto was not to kill the Jews — the Nazis [are] going to think about that later. The pope wanted them to convert to Christianity by letting them live a hard life,” Calo’ says.

Jews were forced to listen to priests’ sermons and, at times, were even forced to convert.

The issue of conversion still rankles. A cartoon in the Italian-Jewish newspaper Pagine Ebraiche, or Jewish Pages, shows Pope Benedict crossing the Tiber River on a tightrope, balancing with a pole — the word “dialogue” at one end, “conversion” at the other.

“We heard a variety of Jewish voices, and all agree that dialogue has value only if it’s tackled with humility, honesty and mutual respect, and without the presumption of converting the other,” Vitale says.

Several recent moves have upset Jewish-Catholic relations: the revival of an old Latin prayer that calls for Jews’ conversion; the lifting of the excommunication of a Holocaust-denying bishop; and Pope Benedict’s decision to put his wartime predecessor, Pope Pius XII, on the track to sainthood.

“During the war, there was a great deportation of Roman Jews, practically directly under the windows of the papal palace,” Politi says. “These Jews were kept by the Nazi troops. They stayed two days here in Rome waiting for train to leave for Auschwitz. And the pope never spoke; he never said publicly, ‘This has not to happen.’ ”

Lisa Palmieri, the American Jewish Committee’s liaison to the Vatican, says the Jewish-Catholic dialogue is essential for both sides, and it’s crucial that there be no step backward.

“It is hoped that [Pope Benedict] will realize that the Jewish requests regarding Pius XII [should] be honored,” Palmieri says.

Those requests are that beatification be postponed until the Vatican opens up its archives to independent researchers.