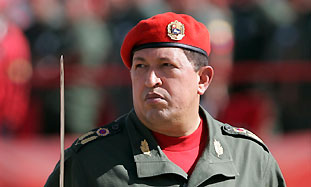 A report by the human rights watchdog of the Organization of American States warns of a possible “threat to the life and physical integrity of the Jewish community in Venezuela” due to the Chavez regime’s violations of the political and human rights of its citizens.

In a lengthy report publicized in late February, the Inter-American Commission on Human Rights (IACHR) accused the government of Venezuela of fostering an atmosphere of “political intolerance” and “a climate hostile to the free exercise of dissenting political participation.”

It blasted the prevailing “citizen insecurity” in the country and saved its harshest criticism for “the prevailing impunity affecting cases ofhuman rights violations,” including in cases of police misconduct, abuse of authority, and even torture.

The Washington-based IACHR is an organ of the Organization of American States that monitors and investigates violations of human rights among the international umbrella’s members.

The information on the situation of the Jewish community comes in part from Venezuelan governmental sources, and in part from concerned Jewish groups such as B’nai B’rith International and The Coalition for Jewish Concerns – Amcha, a US-based network that advocates “on behalf of endangered Jews.”

Beginning in paragraph 780 of the report, which is available online at the IACHR’s Web site, the commission expressed “concern” over “reports claiming thatthe Jewish community in Venezuela is being especially affected by violent incidents.”

Citing anti-Semitic discourse in media and among state officials, combined with vandalism and an “unexplained” raid by Venezuelan police, thereport concludes that such incidents contribute “to creating an atmosphere of intimidation and violence against the Jewish community in Venezuela.

“The foregoing, added to the lack of investigation and sanctioning of those responsible for these acts, including those in which state forces participated, constitutes a threat to the life and physical integrity ofthe Jewish community in Venezuela.”

According to Amcha’s Rabbi Shmuel Herzfeld, “the Venezuelan government would have us believe [these incidents] were committed by a bunch of thugs, and this document, written on OAS stationery, says otherwise.”

Amcha has submitted a request to hold additional hearings on the matter, and Herzfeld is hopeful these will take place by October.

The report devotes two long paragraphs to a December 2007 police raid at Caracas’s Hebrew Social, Cultural, and Sports Center, which the Venezuelan state claimed was meant to find “evidence of criminalistic interest related to the alleged commission of a crime against public order, thecommunity, or national security.”

According to the IACHR report, “the information furnished by the State regarding the operation at the Hebrew Center is inadequate to explain the incident that occurred at the institution’s headquarters.”

The report went on to cite the growth in recent years of official and media rhetoric that is “anti-Semitic in tone,” noting a speech delivered by President Hugo Chavez in 2005 that accused “some minorities, the descendants of those who crucified Christ, the descendants of the same who threw Bolívar out of here and they also crucified him in their way in Santa Marta, there in Colombia,” of “[seizing] the planet’s gold, silver, minerals, water, good land, petroleum, riches, and [concentrating] the riches in a few hands.”

This, combined with similar statements by other government officials, were followed by “expressions with anti-Semitic content in opinion programs and articles, including in government-controlled media or media aligned with the government such as Cadena Venezolana de Televisión (VTV).”

The commission vowed to keep track of steps taken by Venezuelan authorities “to keep such violent acts against the Jewish community in Venezuela from reoccurring, to establish the truth about the incidents, and to punish the guilty.”
(Tags: Venezuela, Jews, Anti-Semitism, Government)