Showdown in the Big Tent 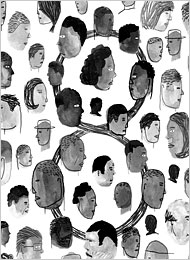 The attitude of white, liberal Hollywood toward African- American churches has long been one of almost participatory respect. Whether it’s Gospel Brunch at the House of Blues on Sunset Boulevard, or the Blind Boys of Alabama on the iPod, or a serious – reverential – mention of the Southern Christian Leadership Conference over dinner, the understanding is clear: the black church is a foundational institution in the history of the civil rights struggle, and its music (although it makes reference to Jesus Christ as a personal savior) is smoking hot.

It was only recently that the A-list discovered that this love is unrequited. Last month, Proposition 8 passed, making gay marriage illegal in California, and the demographic that lent insult to injury was the state’s African-American voters.

They came to the polls in record numbers to support Barack Obama, and they brought with them a fiercely held and enduring antipathy toward homosexuality: 7 in 10 blacks voted in support of traditional marriage. Whether that was the game-changer or not is a question for near-constant debate. Many gay activists have begun quietly to suggest that had Hillary Clinton been the Democratic nominee, Prop 8 would not have passed.

Of the values progressives hold dear, none can be as central or as cherished as the promotion of diversity. It is a word that has become almost a term of art. When a private school champions its embrace of “diversity,” parents understand that the admissions office is not dying to enroll the son of a white evangelical minister or the daughter of a founding partner of a white-shoe law firm. Rather, we know that the school makes an intentional effort to include children of certain minority groups among its student body, and that most important among those groups are African-Americans and the children of gay families.

Left-leaning California’s horror about this newly revealed schism between two of its favorite sons is a situation that cries out for a villain, but the one that liberal white Hollywood has chosen for the role probably won’t make it all the way to the third act.

“It’s their churches,” somebody whispered to one of us not long after the election; “It’s their Christianity,” someone else hissed, rolling her eyes. Apparently the religion espoused by the Rev. Dr. Martin Luther King Jr. is now the enemy, at least among the smart set, and if this sounds like a regional issue, it’s not.

What we in California have been forced to confront, before anyone had even had the chance to sweep up the tinsel or plop the first Alka-Seltzers into the glasses of water after that heavenly night in Grant Park, is that there’s a big difference between coalition politics and rainbow party politics.

A coalition is composed of groups that may dislike – or even hate – one another, but who understand the shared political expediency of standing together. Rainbow party politics involve bringing together masses of people who are identified by being burdened by a particular grievance. Soon enough – in groups forged of such friable bonds, and almost always when matters of morality and lifestyle come into play – you will discover that one oppressed group does not necessarily support the goals of another oppressed group.

Hollywood, of course, is a city full of statesmen and moral authorities, and many of them ran to their pulpits and Web sites to get on the right side of this issue, but there was no way to hold both truths together in a position that was both acceptably liberal and coherent. “At some point in our lifetime,” said George Clooney, “gay marriage won’t be an issue, and everyone who stood against this civil right will look as outdated as George Wallace standing on the school steps keeping James Hood from entering the University of Alabama because he was black.”

To the opponents of Proposition 8, this kind of analogy is a rallying cry; but as white Hollywood has recently discovered, to the blacks who voted for the measure, it’s galling. Comparing the infringement on civil rights that gays are experiencing to that suffered by black Americans is to begin a game of “top my oppression” that you’re not going to win. The struggle for equality – beginning with freedom from human bondage (see: references to the book of Exodus at the Gospel Brunch) – has been so central to African-American identity that many blacks find homosexual claims of a commensurate level of injustice frivolous, and even offensive.

Furthermore – and perhaps even more painfully for those of us who support gay marriage and all that it represents – Christian teaching on marriage is not the only reason so many blacks supported Proposition 8. Although it has come as a shocking realization to many in this community, a host of sociological studies confirm that many blacks feel a significant aversion to homosexuality itself, finding it morally and sexually repugnant. And here in essence is the problem with the Democrats’ big tent, as well as the grounds for a wholly new kind of culture war that is probably going to make us long for the clear lines and simple enmities of the old one. The New Deal coalition was a mass movement based on building a more just economic and political order, embracing Protestant evangelicals and Catholic immigrants, segregationists and integrationists, radical left-wingers and unionized working men from the steel belt, all holding their noses with one hand and pulling the lever with the other. Many of us who voted for Mr. Obama want the same things that the New Dealers wanted; we aren’t trying to advance a cause as much as we want to regain so much lost ground.

“This is our moment,” the president-elect has told us, stirringly. This is our time to stand shoulder to shoulder, the hipsters of Washington Square and the minivan moms of Minnetonka. Our nation is seeing huge numbers of its citizens slide into actual – and virtually intractable, if we keep hold of President Bush’s policies – poverty. We can stand together on these big issues, or we can balkanize ourselves with the help of good old-fashioned identity politics, which didn’t serve too well the last time around.

As anyone who ever had to sit through a lecture on “the paradox of tolerance” can tell you, it’s possible to create a vast utopian society forged of many previously disenfranchised groups – but you don’t want to ask too many questions.