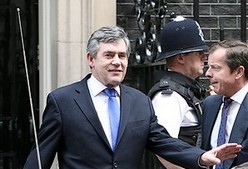 LONDON – The British government has announced it is increasing its funding for a scheme set up to enhance research and academic cooperation between Britain and Israel, which has just awarded its first grants to 15 joint Israeli and British academic projects.

The Britain-Israel Research and Academic Exchange Partnership (BIRAX) was set up by the British Council in collaboration with the Pears Foundation, Department for Business Innovation and Israel’s Science and Technology Ministry in 2008 to enhance cooperation and build stronger links between the two countries.

The government has contributed a further £29,000 – to add to the £20,000 it initially contributed – to BIRAX, which has just announced the first round of projects it is supporting: 15 collaborative projects at 17 different universities across the UK and Israel.

“I very much welcome the announcement of the grants for 15 collaborative research projects involving Israeli and UK universities,” Prime Minister Gordon Brown said.

“The variety and diversity of these successful bids reflect the strong nature of the UK-Israel bilateral relationship. It was an honor for me launch the scheme in 2008, together with the Israeli prime minister, and my government continues to support and actively encourage academic links between the UK and Israel.”

Grants totalling £365,000 have been awarded to a range of academics for the purpose of research and exchange opportunities in exact and social sciences and in innovative research areas ranging from galaxy clusters to motor neuron degeneration. The projects were selected for their innovation, strong approach to partnership and their potential to produce results for the benefit of the wider academic world and society at large.

“Our foundation designed the BIRAX scheme with the British Council to deepen academic cooperation between British and Israeli universities,” said Trevor Pears, executive chair of the Pears Foundation. “It is exciting to be entering the second year of the scheme and continue to meet the high level of demand from academics in both countries.”

The London-based Pears Foundation has contributed the largest amount to the initiative, with £550,000. The Israeli government has contributed NIS 160,000 and the United Jewish Israel Appeal contributed £200,000.

“The deepening of the scientific cooperation between our countries, as expressed by the BIRAX partnership, reflects the high level of research in both Israel and Britain,” said Prime Minister Binyamin Netanyahu. “I have no doubt your joint work will lead to scientific breakthroughs in various fields of research for the betterment of all mankind.”

Ivan Lewis, Foreign Office minister of state, said the volume and caliber of applications submitted in 2009 demonstrated just how keen British and Israeli academics are to work together and complement each other’s research strengths.

“Government support for BIRAX is a tangible example of our determination to oppose boycotts against Israel, which are unacceptable and do nothing to promote understanding or the cause of peace in the Middle East,” he said. “We hope the extra money we are investing will boost BIRAX in its second year and help extend the scheme more widely.

“But in this we are not alone, we are part of a broader partnership that recognizes the value of enhancing academic co-operation and building stronger links between our nations,” Lewis added.

The British government is set to announce the next call for proposals at a reception in the Foreign Office next Tuesday.

Academics in both countries will be invited to apply for the next round of grants which will focus on shared and global challenges in areas such as energy, the environment and nanotechnology.