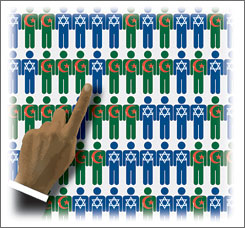 A new census of Muslim congregations is reviving controversies over how many Muslims are in the USA, how they are counted and why it matters.

On the campaign trail, will a politician stop by a synagogue or a mosque? When members of Congress vote on Middle Eastern policy, which home state constituency has more influence? When the school board sets next year’s vacation calendar, whose holy days are recognized?

“Numbers are a major factor in being marginalized or being recognized by decision-makers in public policy,” says Ibrahim Hooper, spokesman for the Council for American-Islamic Relations, a civil rights and advocacy group and a sponsor of this second mosque census.

The first census in 2000 counted 1,209 mosques. The tally became controversial when the census announced more than 6 million Muslims were in the USA. That figure was so high it would have vaulted Islam into one of the five largest religious denominations in the country.

But lead researcher Ihsan Bagby, now associate professor of Islamic studies at the University of Kentucky-Lexington, says the 6 million figure actually was a “ballpark estimate.” Bagby says he “extrapolated” the total from the 1.8 million adults counted in attendance by imams and mosque leaders. He wrapped in estimated numbers of family members who didn’t attend, people in prison and people who may go to the mosque only for major festivals. No other national survey has counted anything close to Bagby’s numbers.

Because the U.S. Census does not ask about religion, every tally is to some degree an estimate based on institutional or individual reporting. And every way of counting and determining whom should be counted has its critics. There is no agreement among or even within denominations on who is an authentic “member,” says David Roozen, director of the Hartford (Conn.) Institute for Religious Research.

The institute is overseeing the mosque study as part of updating its comprehensive look at congregations to examine their fundamental role in American life.

The Catholic Church has many ways dioceses report the number of Catholics. Islam, Hinduism and Buddhism historically do not follow a traditional Judeo-Christian model of “membership” in an institution. Immigrants may be unwilling or unable to participate in a telephone survey. Some faiths count infants, while others count only adults. Some denominations apply a theological screen to who is a member, insisting that merely attending worship is not sufficient.

And no one agrees on whether people born and reared in a denomination who now say they have no religion should be counted with their parents based on “common heritage and historic experience and social, political ties,” says Ira Sheskin, geography professor at the University of Miami and director of the JewishDemography Project.

A picture of worship

“What people do and how they think of themselves, and how we want to classify their institutional affiliations are very, very different,” says Gary Tobin, president of the Institute for Jewish & Community Research in San Francisco. “If you say you are Episcopalian but you attend a Baptist church on Sundays with your wife who is Baptist, who counts you? If neither one of you attends church anywhere, what are you then?”

Bagby adds: “Everyone makes judgment calls about who is counted.”

The mosque census is being conducted with telephone and Internet questionnaires completed by imams, staff and other key people at mosques.

“We are looking at the numbers at prayer, ethnicity, the role of the staff, women’s participation and level of involvement in American civic life,” Bagby says.

Although the study will not determine authoritatively how many Muslims are in the USA, he says, it will create a rich portrait of how many worship and participate in Muslim life.