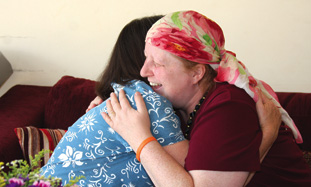 With all the battles women are leading with issues such as sexual violence, abuse, abortion rights, body image, status, equal opportunities and the wide range of obstacles which are inherently a product of a patriarchal society, a woman’s own body may seldom offer peace and may be a battlefield in itself. This is how breast cancer can be understood as more than just a health issue, as a problem that comes along with an enormous amount of other matters that need to be addressed.

Rachel “Rochie” Schitskovsky-Ivker, founder and executive director of Hadadi Center for Breast Cancer Survivors, started this organization for the purpose of providing an all-encompassing center where women can find all the tools they need to deal with breast cancer. “The idea of Hadadi is that it is a one-stop shop for support for breast cancer survivors,” Schitskovsky-Ivker explains. “Whatever women need once they are diagnosed, they can get here.”

Located in Jerusalem, the center offers a wide range of services such as support groups, workshops, a wig bank, cosmetics, prostheses, fitness classes and more.

Schitskovsky-Ivker emphasizes the importance for the breast cancer survivor of daily personal contact with social workers and other survivors. For that purpose, Hadadi offers what she calls a café to provide survivors with this sort of contact, which is not readily available in most other centers around the country.

“What happens in those places is that even if there is a group for women with breast cancer, it is a support group that meets every week or two, but it doesn’t give the women support in between the meetings,” she says. “The idea with the café is that anybody can open the door at any time, sit here and have someone to talk to. If she feels really bad, she feels depressed, she feels like everything is falling apart, she feels like her back is hurting her and maybe the cancer is back and it’s in the bones – there is someone here to talk to all the time. And that’s a huge difference.”

Aside from offering support to the women, Hadadi also gives group therapy sessions for families and children of survivors. Schitskovsky-Ivker says that once a woman is diagnosed with breast cancer, the entire family is affected. Hadadi has a social worker who works with children to help them cope with the fact that their mother is sick.

Schitskovsky-Ivker also says that being the husband of a woman with breast cancer is not easy and that spousal discord is an issue that needs to be addressed. “Research shows that 20 percent of women with cancer, not just breast cancer, within six months of the diagnosis, they get divorced or separated.” This is how she decided to include a group therapy session for couples as one of Hadadi’s services. “The good thing is that research also shows that if the couple goes through some sort of treatment, some sort of therapy, then it drops down to 3 percent,” she states.

“Breast cancer was always in the back of my mind,” she says. “I was 30 weeks pregnant with my third kid, and I incidentally touched my breast. It was not something that I was looking for. I was not checking myself. I just started to feel something that was hard. I went to get checked immediately and had a biopsy. The biopsy came back positive for breast cancer. I had absolutely no doubt that I wanted to have a bilateral mastectomy [removal of both breasts]. However, because I was pregnant, the only accommodation was to not have a long surgery, and to have a lumpectomy to just get rid of the lump. And five weeks later, they induced my daughter. Nine days after she was born, I started chemotherapy.”

She says that the hardest part of this experience was that she was unable to breast-feed her newborn child.

“I nursed my other two kids – my son and my daughter. It was very important to me,” she continues. “Aside from the chemotherapy, the two pills that they gave me to take to stop the milk from coming was the hardest I ever had to take. I can picture it today, sitting on the nightstand there – these two pills that I knew I needed to take – and I couldn’t, but I had to make myself.”

While breast cancer stops the breasts from serving their ultimate purpose of nursing, it also affects the woman’s body image. Breasts define femininity in a girl’s life from the onset of puberty. Therefore, if some women choose to not use their breasts for their biological purpose, they still view them as sexual organs. But breast cancer poses an impediment to that function as well, especially following a lumpectomy or a mastectomy, at which point the woman may view her body as deformed.

“Some women say, ‘This is part of my sexual life,’” Schitskovsky-Ivker explains. “‘It’s how I present myself. If I’m deformed, how will my spouse look at me? It’s not something that’s inside and nobody can see. Every time he sees me getting out of bed, getting into bed, getting dressed in the morning, he sees me deformed.’ It causes a lot of fear.”

Because surgery is the first thing that needs to be addressed, a woman needs to decide right away whether to have a mastectomy or a lumpectomy. As a result, this body image issue comes first, before anything else.

“What am I going to do? Am I going to have a mastectomy or a lumpectomy?” Schitskovsky-Ivker states the questions and concerns a woman considers after she is diagnosed. “And either way, how am I going to look and how is my sexual life going to be affected by it?”

Later on comes the issue of the effects of chemotherapy, such as hair loss. Hadadi addresses that issue with its wig bank and workshops for women going through chemotherapy.

The body image issue also affects women who want to exercise at a fitness center but may feel uncomfortable regarding how other women may look at them. Since an active lifestyle may help prevent breast cancer or prevent it from recurring, Hadadi also started offering sports classes.

“Women don’t want to go to regular places,” Schitskovsky-Ivker explains. “If a woman had a mastectomy, going to a regular fitness center causes the conflict of ‘should I go and wear my prosthesis and that’s really uncomfortable? Or should I take it off and everyone will stare?’ The same thing with the hair. It’s uncomfortable to exercise with a wig on.”

AS JERUSALEM is a multicultural city, Hadadi tries to reach out to breast cancer survivors from all walks of life. For example, to cater to the Anglo community, the center is starting a movement therapy group in English. However, Schitskovsky-Ivker states that it is harder to reach out to the haredi and Arab populations because they tend to have their own places and organizations. Beit Natan, for example, is a cancer center specifically for the haredi population, and Hadadi works in cooperation with it.

“The haredi groups have a different way of coping with the reality of breast cancer,” she says. “But I feel good that they have their solution and if someone approaches me, first of all, I will definitely let her come in here, and if she is not comfortable, we’ll definitely send her to Beit Natan… They can offer much better support for these women.”

It is for that reason that she feels it is not necessary to recreate a group for haredi women if it already exists. The haredim need their own space and their needs have to be dealt with differently, since their entire life revolves around religion.

“They go back to religion for emotional support,” she says. “In a group, the facilitator would ask, ‘What is the thing that helped you deal with your cancer?’ Most of the women, even religious women that come here, talk about other things. They talk about their family, their will to live, their children, their work, their passion in life whatever it might be… But most haredi women that I’ve heard would say ‘The Book of Psalms, faith, God…’”

She describes the element of secrecy within the haredi population surrounding breast cancer. “I’ve had a woman here who refused to tell her kids that she was going through cancer,” she recounts. “We actually tried talking to her because it was obvious that the kids could see it. And we believe that it’s better to talk to the kids to explain to them, so that they don’t live with the uncertainty.”

She says it is even harder to give support to the Arab population because they cannot find a volunteer who speaks Arabic.

Despite these barriers, she emphasizes the importance of awareness.

However, when asked about a T-shirt slogan for babies and young girls that was recently marketed for breast cancer awareness – “Find a cure, before I grow boobs” – she expresses concern regarding the effect it might have on the body image of these girls once they reach puberty.

“They need to grow and mature and grow their breasts and feel good about this,” she says. “They need to feel that they are maturing sexually and physically, without attaching illness to the breasts.”

She also emphasizes the importance of getting checked regularly for breast cancer. She says early detection is the best way to catch the cancer at an early stage and take care of it immediately.

To finish on a positive note, she says that “someone who is diagnosed at the early stages of breast cancer, the chances of survival are over 90 percent.”