‘I hope more officers from the community will follow,’ Second Lieutenant Shalem Gin says. ‘This is a dream come true’

History was made on Wednesday when Shalem Gin became the first IDF officer from the Bnei Menashe community. Gin received the rank of second lieutenant in front of friends and family at a ceremony held at the Bahad 1 military base in the Negev.

Gin, 20, was born in Mizoram, a state in northeastern India. He and his family made aliyah in 1995. Gin joined the IDF in 2009 and enlisted in the Engineering Corps, where he finished near the top of his class in his commanders course.
Jewish Agent

After completing the course with honors, Gin was then sent to officers’ training, which he officially completed Wednesday. He will now return to his unit as a platoon commander.

“This is a dream come true. It brings great joy and pride to me and my family,” Gin said. “As the first Bnei Menashe officer in the IDF, I hope that more from the community will follow.”

“Shalem is a very talented young man with extraordinary ambition,” said Michael Freund, Founder and Chairman of Shavei Israel, the organization responsible for the aliyah of the Bnei Menashe. “When I met Shalem a few years ago, he told me that even as a child in India he always dreamt of becoming an Israeli combat soldier. Nonetheless, I’m sure that Shalem himself did not imagine that he would become the first Bnei Menashe officer in the IDF, but today he has achieved that goal and we are all very proud of him.” 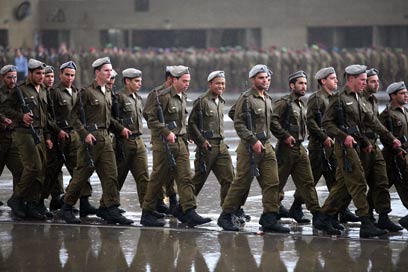 ‘A pioneer.’ Gin with fellow officers

“Shalem Gin made history today,” Freund added, “He is a pioneer in his community who has paved the way for others to follow in his footsteps.”

Freund also called on the Israeli government to allow the remaining 7,232 Bnei Menashe in India to make aliyah as soon as possible. “Shalem Gin’s success story underlines the contribution that the Bnei Menashe wish to make to the State of Israel. It is time to bring about an end to the community’s waiting, and to enable them to come home to Israel as soon as possible,” he said.

About the Bnei Menashe claim to be descendents of one of the Ten Lost Tribes of Israel, who were sent into exile by the Assyrian Empire more than 27 centuries ago. They currently live in India’s northeastern border states of Manipur and Mizoram.

Throughout their exile, the Bnei Menashe nonetheless continued to practice Judaism just as their ancestors did, including observing the Sabbath, keeping kosher, celebrating the festivals and following the laws of family purity. In recent years, Shavei Israel has brought some 1,700 Bnei Menashe to Israel. Another 7,232 still remain in India.