7 dead in bombing of Israeli bus in Bulgaria 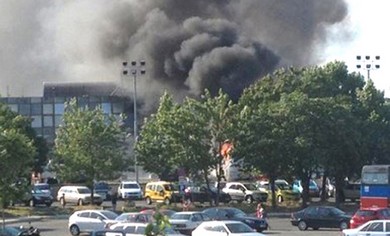 Prime Minister Binyamin Netanyahu blamed Iran on Wednesday for the bomb attack that killed at least seven people and wounded dozens more on a bus carrying Israelis just outside the airport in Burgas on the Black Sea coast.

Netanyahu, who said “all signs lead to Iran,” warned that Israel would respond forcefully against Iranian terrorism.

The blast on the bus occurred soon after a charter plane, Air Bulgaria flight 392 from Ben-Gurion Airport, landed at 4:45 p.m. The bus was the second of four carrying Israeli tourists from the airport to hotels in the city.

The explosion also damaged two of the other buses.

The explosion is believed to have been caused by a bomb placed either underneath the bus or in its luggage compartment.

Eyewitnesses said people jumped out of the windows to extricate themselves from the carnage.

One eyewitness, Shoshi Ayaler, told Channel 2 that the Israelis had just gone through passport control and were directed to the buses.

“We placed our bags in the luggage compartment and after a couple of minutes the bus burst into flames,” she said.

Her son Guy said that “people who survived the blast escaped through the windows so as not to walk over corpses.” He said the injured were evacuated to the hospital and the rest were returned to the terminal.

“Over the last few months alone we have seen Iranian attempts to attack Israelis in Thailand, India, Georgia, Kenya, Cyprus and other places,” the prime minister said in a statement.

On Tuesday, Netanyahu raised the threat of Iranianbacked terrorist attacks on Israeli targets, during a meeting with Hungarian President Janos Ader. He also mentioned this threat at Sunday’s cabinet meeting, when he pointed a finger at Iran for trying to carry out a thwarted attack in Cyprus earlier this month.

Security officials said a similar plot – the bombing of an Israeli tourist bus in Bulgaria – was foiled earlier this year.

Wednesday’s attack came on the 18th anniversary of the bombing of the AMIA Jewish center in Buenos Aires that killed 85 people and wounded more than 300.

This is a global Iranian terror onslaught and Israel will react forcefully to it.”

Defense Minister Ehud Barak said the attack was part of a “long battle” that Israel was waging against attempts by Iran, Hezbollah and Hamas to attack Israeli targets overseas. He urged Israelis to continue traveling abroad and vowed that the defense establishment would use all its force to “get its hands on the perpetrators and the plotters.”

Bulgarian President Rosen Plevneliev, Foreign Minister Nikolay Mladenov and the country’s interior minister all rushed to the scene of the bombing. Israel and Bulgaria have close ties and the Bulgarian resorts on the Black Sea coast are popular vacation destinations for Israelis, especially for youth.

Foreign Minister Avigdor Liberman was in contact with Mladenov, who said that six people were killed at the scene, and a seventh died in the hospital.

Thirty other people were wounded, including two in critical condition.

The Foreign Ministry’s situation room immediately went into operation after the blast, and received scores of calls from worried relatives. Deputy director- general Gideon Meir said the ministry efforts were focused on three areas: providing help to the injured, providing logistical assistance for other Israeli tourists in the area and identifying the bodies.

Meir said that two Israeli planes were expected to land in Burgas after midnight with two Israeli doctors, seven paramedics, a psychologist and three Foreign Ministry workers to supplement the staff from the embassy in Sofia who went to Burgas.

Liberman, in a conversation with Cypriot Foreign Minister Erato Kozakou-Marcoullis, whose country holds the rotating presidency of the EU, said that in addition to dealing with the dead and wounded, Israel would work on all levels to ensure directly or indirectly that all those involved in the attack “pay the price.”

Brig.-Gen. (res.) Nitzan Nuriel, the former head of the Counterterrorism Bureau, said Hezbollah and Iran could have recruited operatives.

“Hezbollah has a presence in Bulgaria and there have been attempts that were thwarted there before,” said Nuriel, who stepped down from his post earlier this year. “They could have relied on the local Muslim community or [their terrorists could have] crossed into Bulgaria from Turkey. It is quite easy.”

Israel has been concerned Hezbollah would attack Israelis overseas in connection with the fourth anniversary of the assassination of Hezbollah military commander Imad Mughniyeh in Damascus, attributed to the Mossad.

Deputy Foreign Minister Danny Ayalon called for European countries to include Hezbollah in their list of terrorist organizations.

Israel had asked Bulgaria to increase its security over Israeli tour groups in the capital city of Sofia. According to Sofia News Agency, a Hezbollah plot was earlier uncovered by local security agencies, which warned Israel. There was no travel advisory in effect for Bulgaria on Wednesday.

Just a few hours before the attack, the Foreign Ministry issued a statement marking 18 years since the Buenos Aires bombing.

“The pain and sorrow we feel is added to the difficult feeling we have that those responsible for this attack were not yet brought to justice,” the statement said.