An Iranian Seder in Beverly Hills 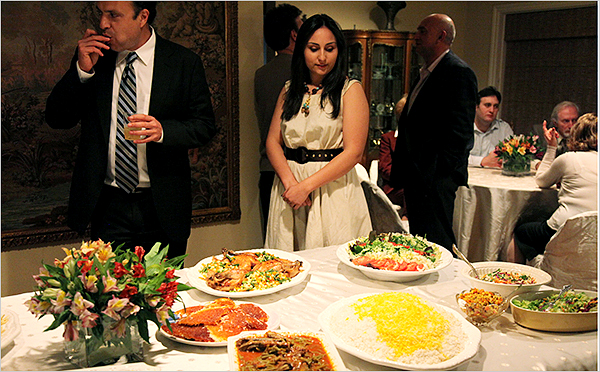 A CULTURE OF FEASTING: Angela Maddahi displays an almond Passover cake that is studded with pistachios and scented with cardamom. Below, Moussa Kohan and his father, Aziz Kohan, some of the dozens of guests at a recent Sabbath dinner at the home of Nazy Maddahi. Bottom, Lauren Maddahi looks over the table before dinner is served.(PHOTOGRAPHS BY AMY DICKERSON FOR THE NEW YORK TIMES)

YOU might say that Maryam Maddahi and her relatives hold a dry run for the Passover Seder every Friday night, when they have a rotating Sabbath dinner for four dozen to five dozen family members.

It’s a common practice for the family, as it is for their fellow Iranian Jews in Southern California, who began settling there after the fall of the Shah in 1979. The population has grown to about 40,000.

Iran has one of the oldest known Jewish communities, going back over 2,500 years to when Jews fled the land of Israel after the destruction of the First Temple. ”We take pride in the country of Persia,” said Mrs. Maddahi, who will host the first Seder on Monday night. ”It was an old monarchy, with thousands of years of history.”

On a recent night here at Ms. Maddahi’s home, some 60 family members were listening and dancing to Persian music performed by a violinist to celebrate the birthdays of Mrs. Maddahi and another relative, Younes Nazarian. The guests, talking mostly in Farsi, nibbled on pistachios, plump dates, nuts and raisins, signs of welcome in Iran.

”Food and feasts were a part of life for us,” said Angella Nazarian, one of Mrs. Maddahi’s daughters, who has just published a memoir of the Iranian Jews’ arrival in the United States, titled ”Life as a Visitor” (Assouline Publishing). ”Jewish people never do anything without food. There needs to be plenty and varied dishes fit for a party of 100 people in order to really call it a dinner party — even if only 20 people are invited.”

The dining table held platters of appetizers including a display of raw scallions, fresh mint, tarragon and dill and Mrs. Maddahi’s extraordinary grape leaves stuffed with rice and barberries and topped with Iranian golden prunes and apricots, a recipe she learned long ago from her mother in Tehran.

Even at Passover, Iranian dinners always include an abundance of rice, brought to Persia from the East about the time that Jews first arrived there. (Ashkenazi Jews do not eat rice at Passover.)

”Persian women take their rice seriously like Moroccan cooks their couscous and the Italians their pasta,” said Angela Maddahi, one of Mrs. Maddahi’s daughters-in-law. By soaking the long-grained rice, then parboiling and finally steaming it, each grain is expertly separated. To catch the steam and protect the texture of the rice, the elder Mrs. Maddahi uses a piece of wicker she encases in cotton fabric, which she inserts underneath the pot’s cover.

The kitchen was a bustle. ”When it is your turn, you make your specialties,” said Nazy Maddahi, another daughter-in-law, who held a Sabbath dinner a few weeks later. ”I assign the other meat and rice dishes to family members.” Daughters and daughters-in-law bring casseroles like fesenjan, a sweet and sour pomegranate walnut chicken stew sweetened with fresh California dates.

Mrs. Nazarian, who is a psychologist, said the food of Iranian Muslims and Jews is essentially the same, except that Jews don’t use butter with meat. Najmieh Batmanglij, author of ”New Food of Life: Ancient Persian and Modern Iranian Cooking and Ceremonies,” which is considered the go-to source on Iranian cooking, agreed. ”I tried to look for specifically Persian Jewish dishes,” Ms. Batmanglij said, ”but the differences I found were based more on regions, not on religion.”

One specifically Jewish dish, served at the start of Sabbath dinners for centuries, is gundi, a plump chicken and chickpea dumpling, flavored with cardamom and tinted with turmeric, that is cooked in chicken broth. During Passover when chickpeas, beans and lentils are considered off-limits, many Iranian Jews in Los Angeles replace the gundi with matzo balls.

The second generation of Iranian Jews in California takes shortcuts, like using commercial gundi mixes. ”I wouldn’t tell her, but I buy prepared gundi, which I swear is as good as my mom’s,” Mrs. Nazarian said.

Sadaf, a kosher company in Los Angeles that specializes in Iranian food, sells frozen chopped mint, dill and marseh (an herb similar to rosemary and tarragon), as well as lemon powder, barberries and a prepared spice combination for charoset, among many other Iranian products.

Although food customs are changing, with convenience becoming the standard, Iranian-American Passover customs are for the most part the same as they have been for generations.

Many first-generation immigrants in Los Angeles still take a full day to shop at grocery stores on Pico Boulevard and then spend another full day cooking, often with old pans brought from Iran.

On the Seder plate the bitter herbs, representing the hardships of slavery, consist of celery, romaine or other bitter lettuces dipped in vinegar.

Persian charoset, called halleq, adapted from the banquet dipping sauces of Greek and Roman conquerors, is filled with nuts and dried fruits, pomegranate juice, bananas and cardamom as the prominent spice. Mrs. Nazarian’s mother-in-law, Soraya, uses a hefty amount of cardamom in her moist almond sponge cake with pistachios for Passover.

During the Seder service, a scallion is placed on each plate. Before singing the song ”Dayenu,” the assembled guests get up from their chairs, take their scallions and begin whacking one another with them to simulate the whips of the slave drivers in Egypt.

”We start a big balagan,” or mess, said Angela Maddahi, an office manager. ”We never sing the whole dayenu, we just beat each other up.”

In other ways, life in the United States has changed the nature of some traditions. Since milk products that were kosher for Passover were unavailable in Iran, Jews followed a very restrictive diet. At sundown on the closing day of the holiday, they eat a yogurt salad, laced with cucumbers, mint, radishes and scallions, with bread.

Today in Beverly Hills, the last day of Passover still involves dairy products. It is also the time for a family with a daughter who is engaged to have a huge celebration called hametzy, featuring yogurt with rice and herbs as well as an Iranian version of crème fraîche. ”The groom’s family brings dairy products and there is a big party at the bride’s house,” Angela Maddahi said.

Another ritual is maintained at the first Seder. After the table is set, it is covered with a cloth to protect the food from negative energy caused by reciting the 10 plagues that God was said to have sent upon the Egyptians.

”As we read each plague we pour two drops of water and wine into a bowl,” Angela Maddahi said. ”After we are done we uncover all the food and pour the liquid from the plagues into running water outside of the house.”

But there is a difference here, too. ”My mother made everything in Iran,” Angella Nazarian said, ”even her own wine. Here you can buy kosher wine.”

1. Heat oven to 350 degrees. Oil a 9-inch bundt pan or a 9-inch square pan and set aside. Using a stand mixer, whisk egg whites until stiff but not dry, and set aside.

2. Using a large food processor, pulse almonds until very finely ground, stirring once or twice to prevent them from turning into a paste. In a medium bowl, combine egg yolks and sugar, and whisk to blend. Add ground almonds, matzo meal and cardamom. Add almond extract and 1/2 cup oil. Gently fold in egg whites.

3. Pour batter into prepared pan. Bake until a toothpick inserted in the center comes out clean, about 50 minutes. Allow to cool for 10 minutes, then remove from pan and finish cooling on a rack. To decorate, dust with confectioners’ sugar and chopped pistachios.

2 tablespoons sour salt or lemon powder, or the juice of 2 lemons (see note)

1. In a small saucepan, combine vinegar and sugar. Bring to a boil, then lower heat, and simmer until a thin syrup forms, about 10 minutes. Let cool in pan.

3. In a medium skillet over medium-low heat, heat oil and add onions. Sauté until golden, about 10 minutes. Add raisins and barberries and sauté a minute or two. Add rice, sour salt, lemon powder or lemon juice, and 2 to 3 tablespoons vinegar syrup (enough for a balance of sweet and sour). Save remaining syrup.

4. Pour 1/2 cup water into a heavy 5-quart pot and scatter in remaining 3 tablespoons rice, to prevent leaves from sticking to pot. On a work surface, place a grape leaf dull side up, and place 1 tablespoon of rice mixture close to the stem. Fold over both sides of leaf and roll up to close. Place seam side down in pot, continuing until there is a single tightly packed layer. Scatter half the apricots and prunes on top. Make a second layer and scatter remaining fruit on top.

5. Add 1/4 cup water to reserved syrup and pour over stuffed grape leaves. Place small heat-proof plate on leaves as weight. Cover pot tightly, bring to a boil, then reduce heat to low. Simmer until leaves are tender, about 1 hour. Serve warm or at room temperature.