As One of Their Own Is Tried for Murder, Bukharans Debate Loss of Old Ways 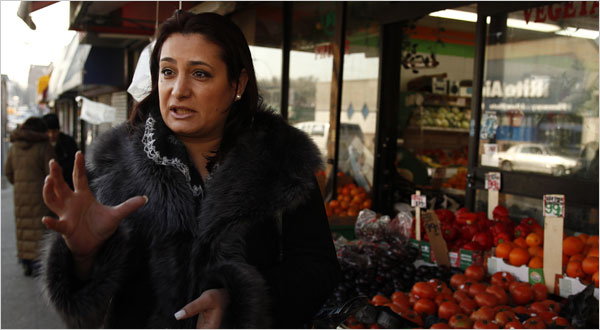 In the Bukharan community in Forest Hills, Queens, the murder trial of Dr. Mazoltuv Borukhova has been a focal point of discussion among people like Margarita Nektalova, above.

At Hollywood Hair Design in Queens, over the din of hair dryers and the chatter of manicurists, the women were arguing over Mazoltuv Borukhova.

“She has no heart,” said one. “She is a devil,” said another. “Come on!” a third protested. “Wouldn’t you fight for your child?”

Most of the staff were Bukharan Jewish women, like Dr. Borukhova, an internist whose murder trial – she is accused of hiring a relative to kill her estranged husband amid a bitter custody battle over their 4-year-old daughter – has transfixed their community as opening arguments began last week.

The case has exposed deep anxieties about how immigration has transformed family dynamics in a community that was transplanted in the 1990s from Central Asia after the fall of the Soviet Union. When they arrived in New York, Bukharan Jewish women often had an easier time finding jobs than their husbands, and ended up in an equal or even dominant role.

Along 108th Street in Forest Hills, where Russian and Bukhori are spoken as often as English, the conversations among Bukharans tend to revolve around a central question: How could a woman from their society, traditionally expected to respect her husband and take a submissive role in the home, be so determined to defeat him that she could end up accused of arranging his murder?

Presiding over the front desk as well as the debate at Hollywood Hair one recent afternoon, Tanya Mushayev was adamant. It was not enough for Dr. Borukhova, she said, to enjoy her American-style status as the educational and professional equal of her husband, Dr. Daniel Malakov, who was an orthodontist. “She wanted power over him,” Ms. Mushayev said.

Angela Aminova, a manicurist, and others disagreed. While they stressed there was no excuse for murder, they said a sense of powerlessness could have driven Dr. Borukhova, who has pleaded not guilty, to an extreme act. Tradition prescribes that in family conflicts, Bukharan women turn to rabbis and elders for help, but often, Ms. Aminova said, rabbis side with the man – or “the one with money in his pocket.”

No one suggests that the case of Dr. Borukhova and Dr. Malakov is typical. But the power struggle between the young couple – and the conflict between their families, including years of court battles – is not unusual. And it has tapped into a broader unease that many immigrant groups have faced as they adjust to life in the United States.

Rafael Nektalov, editor of The Bukharian Times, a Russian language newspaper that serves as a community sounding board, speaks for many in the Bukharan power structure when he says that the American legal system – particularly the ease with which women can obtain protection orders, divorce and alimony – threatens the authority of elders and has swung the pendulum of power too far to women.

“A woman understands that to take everything, all she has to do is say, ‘I have been abused,’ ” Mr. Nektalov said. “It has become like feminine blackmail.”

But Margarita Nektalova, who was shopping for vegetables on 108th Street and is distantly related to Mr. Nektalov, said women needed the legal resources available in America.

“We are more protected here,” said Ms. Nektalova, 39, a physical therapist who turned to the courts to win custody of her children in a divorce that she blamed on the pressures of immigrating to the United States. While elders can mediate some cases, she said, they can do nothing if an abusive husband “has no conscience.”

For 2,500 years, Bukharan Jews lived in and around the Central Asian city of Bukhara, largely in what became the Soviet republics of Uzbekistan and Tajikistan. They preserved their Bukhori language, which is similar to Farsi, and their Jewish traditions.

After the fall of the Soviet Union, the Bukharan community in the United States swelled to about 50,000 from a few thousand, almost all of them in Rego Park and Forest Hills in Queens.

The informal seat of power is a community center on 70th Avenue that houses the office of the chief rabbi of the Bukharans in the United States, a synagogue, The Bukharian Times and other organizations. The halls are lined with oil paintings of rabbis jailed by the Soviets, dressed in colorful Central Asian robes and with Bukharan carpets as backdrops.

In his corner office, Boris Kandov, president of the Bukharian Jewish Congress of the United States and Canada, has hung two paintings he commissioned, each at least 12 feet long, in scrolled gilt frames. One shows Moses parting the Red Sea. The other shows George Washington on a horse, accepting the surrender of the British.

“This one talks about Jewish freedom,” Mr. Kandov said, pointing to Moses. “And this” – indicating Washington – “is the freedom of America.”

But American freedom, he said, has one “bad feature.” In the Soviet Union, where no one trusted the authorities, Bukharans did not go to court with family problems, he said. Husbands and wives would separate, cool off, and reconcile.

In America, in Mr. Kandov’s view, women rush to get protection orders, which then prevent husbands from apologizing.

“If a father taps a child on the back of the head like this,” he said, walking around a table to demonstrate on a reporter, “that doesn’t mean that he beat him. But if it’s recorded by the police, that’s it – he’s a criminal.”

Dr. Borukhova did indeed accuse Dr. Malakov of abusing her and their daughter, but a Queens Family Court judge apparently found those allegations meritless and, citing her interference with her husband’s visitation rights, awarded him sole custody. Still, it was a decision that even supporters of Dr. Malakov found strange.

“In this country we have ‘mapas’ – papa who is also mama,” Mr. Nektalov said. “It’s nonsense.”

Six days after Dr. Borukhova handed over their daughter, Dr. Malakov was shot to death on Oct. 28, 2007, as he brought the girl to visit her mother.

Edward Pariants, who is chief correspondent for The Bukharian Times, said the image of Dr. Borukhova as a predatory wife resonates emotionally with some Bukharan men.

Bukharan women, even those who had been doctors and lawyers in their homeland, tended to quickly find menial jobs cooking, cleaning or caring for the elderly in America. The typical Bukharan man, Mr. Pariants said, is unwilling, and perhaps unable, to do the same, creating tensions.

“He lost his leading role, and the woman ended up ahead,” Mr. Pariants said. “For Eastern people, and for any man, there is some kind of humiliation in that.”

The chief rabbi of the Bukharans, Itzhak Yehoshua, said that back home, amid a creaky Soviet legal system and traditional Muslim neighbors, Bukharan society was “less alert” to women’s rights. And he said he understood why some younger immigrants turn to courts and lawyers instead of rabbis – because elders reared in the Soviet Union do not always understand American problems.

But, he said, seeing how the Borukhova case ended in violence has sent more young people for traditional counseling. (He said he tried to mediate for Dr. Borukhova and her husband, but found both uncooperative.)

At a bus stop outside Hollywood Hair Design, Mira Ilyazhanova, 73, said she was glad to see women embracing independence, going into business and driving cars. “But some divide their families and do whatever they want,” she said. “You shouldn’t cross the line.”
(Tags: Bukharan Jews, Trial)