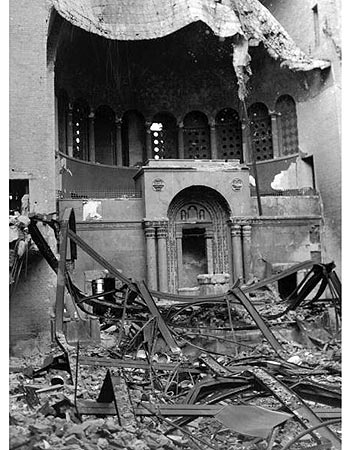 Germany’s largest synagogue on Ryke Street badly damaged during 1938 Kristallnacht pogrom. For many, re-opening signifies revitalization of Jewish spirit. ‘It is a miracle that there are Jews in Germany again,’ says rabbi

How fitting it is that during Holocaust Education week, a Berlin synagogue damaged during Kristallnacht has just completed an extensive reconstruction, allowing it to reopen this past weekend, and revive the community’s Jewish spirit.

The Ryke Street synagogue, Germany’s largest shul with seating for 1,200, re-opened its doors on November 2, almost 70 years after it was badly damaged during 1938’s Nazi pogrom known as Kristallnacht (Night of Broken Glass).

The reconstruction – which took the work of two architects and a decade – cost approximately €5 million, or $7million.

Built in 1904, the Ryke Street synagogue was attacked during the infamous night of violent, anti-Semitic attacks on Jewish owned homes and businesses, and the name – Kristallnacht – refers to the shards of shattered glass that lined German streets in the wake of the pogrom – broken glass from the windows of synagogues, homes, and Jewish-owned businesses plundered and destroyed during the violence.

While for many in Germany, the re-opening signifies a revitalization of the Jewish community, it probably means more to one man, more than anyone else.

And that man is 94-year-old Rabbi Leo Trepp, who had delivered many sermons at the Ryke Street shul back in the 1930s before his capture by the Nazis, who took him to the Sachsenhausen concentration camp with many of his congregants.

Trepp, who was one of the special guests invited to the new shul’s inauguration ceremony, didn’t hide his emotions in what was an extremely emotional ceremony.

“It is a miracle that there are Jews in Germany again,” said the rabbi. “And the synagogue on Rykestrasse, which survived two different regimes, is the symbol of that miracle.”

The last time services took place in the synagogue was in April 1940.
(Tags: Germany, Synagogue)