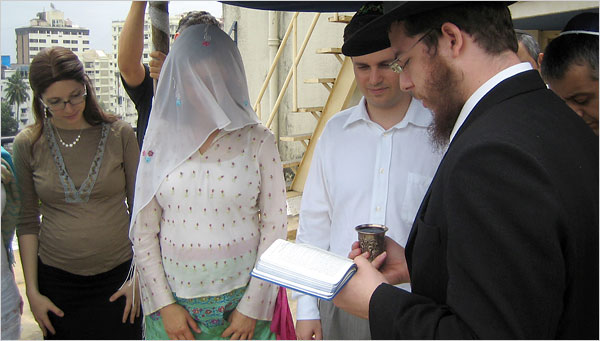 In this photo provided by Chabad.org, Rabbi Gavriel Holtzberg, right, performed a Jewish wedding in Mumbai, India, in 2006, as his wife, Rivka Holtzberg, left, looked on.

Leaders of the Chabad-Lubavitch movement in Brooklyn and the worldwide ultra-orthodox Jewish community began on Friday to mourn the deaths of Rabbi Gavriel Holtzberg and his wife Rivka, who were killed in the terrorist attack of the Nariman House, the Jewish outreach center in Mumbai that the young couple had left New York to manage in 2003.

Rabbi Yehuda Krinsky, who leads the group’s emissaries, condemned “the brutal murder of our finest…. Words are inadequate to express our outrage and deep pain at this tragic act of cold-blooded murder.”

The couple’s son Moshe, who turns 2 on Saturday, was rescued from the attack by the family’s nanny. “Today he became an orphan, without a dad and mom to love him and embrace him and celebrate him,” Rabbi Krinsky said.

Ms. Holtzberg’s parents, Rabbi Shimon and Yehudit Rosenberg, flew from Israel to Mumbai, arriving early Friday with members of a private search and rescue organization, ZAKA, and now have custody of the child, Rabbi Krinsky said.

Rabbi Moshe Kotlarsky broke down when describing Mr. Holtzberg, 29, as “the finest and nicest gentleman that you can imagine. You never saw him without a smile.”

He was “a real mensch,” Mr. Kotlarsky said. “We’ll miss him very dearly. He was a very special person, him and his wife.”

In 2003, Rabbi and Ms. Holtzberg, both Israeli-born but living in Brooklyn, left New York to run the Chabad center known as the Nariman House, where they managed a synagogue and led religious classes and other social and outreach activities at the center, one of about 3,500 outposts around the world run by the Lubavitch Hasidic movement. Rabbi Holtzberg is a citizen of both the United States and Israel.

“Gabi and Rivky Holtzberg made the ultimate sacrifice,” Mr. Kotlarsky said in a statement before the news conference. “Their selfless love will live on with all the people they touched. We will continue the work they started.”

“They found five bodies – two women and three men,” Mr. Barak said, according to Reuters. “Some of the bodies were tied up. To judge by the accompanying signs, some of the people were killed a good number of hours previously.”

Mr. Barak said that the house “was completely ruined from within, mainly from the explosions set off by the Indians.”

On Wednesday, the Holtzbergs’ Chabad house became an unlikely target of the terrorist gunmen who unleashed a series of bloody coordinated attacks at locations in and around Mumbai’s commercial center.

Firing grenades and automatic weapons, the men took the Holtzbergs and at least six other people hostage, according to friends of the Holtzbergs. The cook, who was also a nanny, managed to escape with Moshe about 12 hours into the siege, the friends said. The boy’s pants were soaked in blood when he emerged.

Rabbi Kotlarsky said that Rabbi Holtzberg had called the Israeli Embassy from inside Nariman House and was describing the situation when the line went dead. His last words before being cut off were “Lo tov,” Rabbi Kotlarsky added, which means “not good” in Hebrew.

It is not known if the Jewish center was strategically chosen, or if it was an accidental hostage scene. In a news conference broadcast Friday on Israeli radio, Tzipi Livni, Israel’s foreign minister said: “We know that the targets there that were sought out by the terrorists were Jewish and Israeli targets as well as targets that are perceived as Western targets – American and British.”

She added: “We need to understand that there’s a world here, our world, that has been attacked. And it doesn’t matter if it’s happened in India or somewhere else. We have here radical Islamic elements who do not accept either our existence or the values of the Western world. And only when incidents of this sort occur is it suddenly understood from conversations with leaders from around the entire world that we are actually party to the same battle.”

In New York, officials condemned the attacks. “This is indeed a very sad day,” Police Commissioner Raymond Kelly said, speaking at the news conference in Crown Heights. “It is a reminder to all of us just how connected we are.”

“This is a tragic loss for the Lubavitch community, and for our entire city,” Mayor Bloomberg said. “That their son survived is a miracle, and our entire city is grateful for his nanny’s heroic act. During a time of terrible sadness, her courage reaffirms our faith in the capacity of good to triumph over evil.”

Said Mr. Markowitz: “The Holtzbergs could have lived a simple and quiet life in Crown Heights, where Rabbi Holtzberg grew up, but their sense of religious duty took them to India to run Mumbai’s Chabad House, which, under their stewardship, became a comforting home away from home for thousands of Jews. We are inspired by their commitment to others. The prayers of Brooklynites, New Yorkers and the global community are with the Holtzberg’s family, loved ones, and especially with their 2-year-old son, Moshe, in this tragic time.”

If the Jewish center in Mumbai lacked the size and prominence of the attackers’ other targets, the news of its fate reverberated among Chabad houses in Australia, Argentina, Tunisia, Kazakhstan, Norway and 67 other countries.

Gavriel and Rivka Holtzberg were born in Israel, though he and his siblings were brought to Crown Heights as children by their parents. The couple married a year before they went to Mumbai, formerly Bombay, to fulfill a role that Rabbi Dovid Zaklikowski, a high school friend of Rabbi Holtzberg, said fit perfectly with his personality.

Rabbi Krinsky said that the Chabad-Lubavitch movement received an outpouring of sympathy. “It is a tribute to the selfless life the young couple led,” the rabbi said. “In their memory, let us channel this unity into our own homes, their short, but productive life.”