Carmen Weinstein, Who Led the Jews of Cairo, Dies at 82

CAIRO — Carmen Weinstein, the leader of Cairo’s small Jewish community and the driving force behind the restoration of Maimonides’s yeshiva and other monuments of Egyptian Jewish history, died on Saturday at her home here on the island of Zamalek. She was 82. 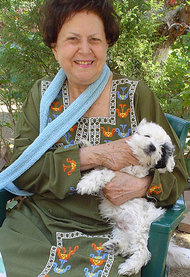 Her death was announced by the Jewish Community Council of Cairo, of which she was president.

Ms. Weinstein refused to accept that Egypt’s once-vibrant Jewish community was dying out, even if its ranks had dwindled to just a few dozen elderly people from more than 80,000 six decades ago. “We are still in Cairo despite what everybody says,” she told a Los Angeles Times reporter 11 years ago.

When the Historical Society of Jews From Egypt, an American group based in Brooklyn, sought help from Congress to remove historical artifacts and prayer books, known as seforim, to the United States for safekeeping, Ms. Weinstein resisted, saying she would ignore the society’s “insensitive letters referring to our inevitable extinction.”

Instead, in 1997, she persuaded the government to classify the Jewish artifacts as Egyptian antiquities, preventing their sale or export. “Taking the Jewish seforim, books and records out of Egypt is tantamount to saying that Egypt should demolish the pyramids and the Temple of Luxor because there are no pharaohs left,” Ms. Weinstein said.

She pronounced herself unflustered by any hostility from her Muslim neighbors over tensions between Israel and the Arab world. “We have no troubles and we don’t talk politics,” she curtly told The Associated Press during Israel’s 2009 war against Palestinians in the Gaza Strip.

President Mohamed Morsi, of the Muslim Brotherhood, issued a statement mourning the loss of Ms. Weinstein. “She was a dedicated Egyptian who worked tirelessly to preserve Egyptian Jewish heritage and valued, above all else, living and dying in her country, Egypt,” he said.

Ms. Weinstein was born in Cairo in 1931, during the era of the British-backed monarchy, when Jews were integrated into society as merchants, bankers, artists and professionals. Her father owned a print shop. She attended French and English schools, studied English literature at Cairo University, and earned a master’s degree at the American University in Cairo. Like others in the Egyptian elite, she was fluent in French, English and Arabic.

Ms. Weinstein was 22 when her father died, in 1953. She took over the print shop with her mother, Esther. They were aided by a younger sister, Glorice, a psychoanalyst in Geneva who survives Carmen. Ms. Weinstein married, but her husband died years ago and she had no children, said Magda S. Haroun, a friend.

The death of Ms. Weinstein’s father came at a turning point for Egyptian Jews — a year after a military coup overturned the monarchy and a year before the coup leader, Col. Gamal Abdel Nasser, consolidated power in his own name. Jews had begun leaving Egypt in large numbers during the Arab war with Israel in 1948. Nasser began expelling them. By the end of Egypt’s wars with Israel in 1967 and 1973, only a few hundred remained.

The Weinstein women were among the holdouts. By the mid-1990s, the remaining Jewish men had mostly died off or moved away. Carmen Weinstein spearheaded a 1996 change to the bylaws of the Jewish Community Council, enabling her mother to become its first female president. After her mother died in 2004, Ms. Weinstein took over.

Ms. Weinstein had already distinguished herself as a dogged preservationist. She was best known for her struggle to save the Jewish cemetery at Bassatine from the vandals, squatters and decay that have plagued Egyptian cemeteries of all kinds. It is one of the oldest Jewish cemeteries in the world, and she sometimes used her own money to pay squatters to depart. She will be buried there.

Ms. Weinstein also worked to persuade the government to restore some of Cairo’s historic synagogues. In 2010, she presided over the restoration of the synagogue and yeshiva once led by Moses Maimonides, a 12th-century Spanish Jew who settled in Cairo, led its Jewish community and became one of the most influential theologians in the history of Judaism.

Ms. Haroun said the community of Egyptian Jews in Cairo now numbered fewer than 21, all of them women. A similar community survives in Alexandria, she said, but that group includes one man, who serves as the local council president there.

Last month, Ms. Weinstein presided over the annual Passover dinner in a hall of the main synagogue in downtown Cairo. Egyptian Jewish women filled two tables, and they were joined by as many as 50 Jewish expatriates, non-Jewish supporters and foreign diplomats.