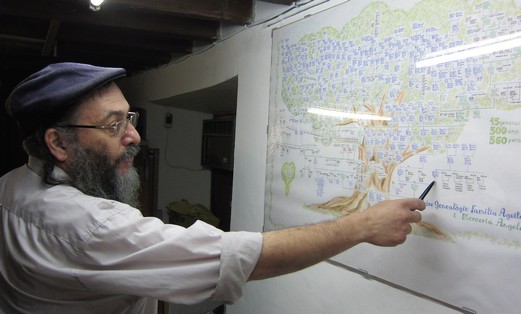 PALMA DE MALLORCA, Spain – Sixty-five year old Miguel Sigura held the prayer book in his hands with the care of a child. Reading the Grace After Meals from the transliterated Hebrew, he stumbled on some of the words and the unfamiliar Hebrew sounds but he was not to be deterred. He completed the short prayer to an enthusiastic round of applause and more than a few hearty pats on the back from the 30 or so people gathered in the social hall of the synagogue here.

For Segura, the prayer was more than a thanksgiving to God for the food he’d just consumed. It was a public act that declared for all to see that he is a proud Chueta – a member of the local Jewish community that managed to withstand the pressures of the Spanish Inquisition for hundreds of years to remain Jewish. The food was almost secondary to the fact that he could offer up the Jewish prayer without fear of reprisal, and that other Jews were there to support his efforts in the heart of the Spanish Inquisition.

“It’s very important to serve as an example to our people, both young and old,” Sigura said. “Our ancestors lived in secret under pain of death for so, so many years, and now we are able to live as Jews – as Chuetas – openly and freely. Now that we have that freedom, we have a responsibility to our ancestors and to ourselves to use it.”

According to Rabbi Nissan Ben-Avraham, a Chueta on his father’s side who moved to Israel and converted to Judaism in 1970, Sigura is one of approximately 15,000 to 20,000 Mallorcans of Jewish descent on the island today. Because the Chueta community was small and isolated – non-Jewish Mallorcans refused to marry Chuetas until approximately 80 years ago and it was considered socially unacceptable in Catholic society to marry Jews until the latter part of the 20th century – full-blooded Chuetas can all trace their family trees back hundreds of years. For this reason, Orthodox authorities such as New York’s Rabbi Marc Angel and Bnei Brak’s Rabbi Nissim Kareletz have ruled that fullblooded Chuetas are Jewish according to Halacha.

But as in other parts of the Jewish world, acceptance has accomplished what persecution could not, and today there are few halachic Jews left. Furthermore, Ben-Avraham said that even if local non-Jews learned they had Jewish ancestry, virtually none would be interested in exploring those Jewish roots.

“You’ve got to remember, to the outside world the Chuetas were the most devout Catholics there were, and they usually tried to hide the fact that they were Jewish from their children. Even in my family, I’ve chosen to become Jewish, but my brother has absolutely no interest in pursuing it. He won’t talk about it so I don’t force it on him, and that’s the way it is for the vast majority of Mallorcans with Jewish ancestry,” said Ben-Avraham.

For the Chuetas and other Bnei Anusim (a general term for descendants of Jews who were forcibly converted during the Inquisition) who are interested in connecting with Judaism, the fact that most of them are not Jewish according to Halacha is a sore point, to say the least. During a weekend seminar earlier this month organized by Shavei Israel, an organization dedicated to helping lost Jewish communities return to Judaism, several people said they are on the front lines for anti-Semitism because they are identified as Jews, but on the other hand they are not accepted as Jews in Israel or by many Jewish groups.

Even worse, many people are hurt that the extraordinary efforts their ancestors made to retain their ties to Judaism count for precious little for purposes of aliya or of membership in traditional Jewish communities.

“We have a pot in my family that is 500 years old, and our family tradition has it that it has never, ever been used for anything other than milk products [and not for meat products, in keeping with Jewish dietary laws – A.F.],” said one woman whose name I couldn’t write down because of halachic Shabbat restrictions. “If the Inquisition had found out about that pot it would have meant our whole extended family could have been burnt alive. That’s what my ancestors did to stay connected to the mitzvot, that’s how they put their lives on the line for Judaism. Now you’re going to tell me I’m not Jewish?” Michael Freund, the Orthodox chairman of Shavei Israel, said painful, accusatory questions like that are among the most difficult he’s had to deal with since founding the organization 11 years ago. He said there is no good answer to the challenge, but stressed the historic responsibility to bring lost Jews back into the fold stemming from the principle of kol Yisrael arevim zeh lazeh – all Jews are responsible for one another.

“Thousands of Jews were stolen – literally stolen – over the centuries from our people. They were kidnapped, forcibly baptized, held hostage in convents and forced to attend Church services and so much more. Today we have the opportunity to right that historic atrocity and to bring them back to the Jewish People where they belong. I feel strongly that we have a responsibility to do everything we can to make that happen,” Freund said.

It’s a lofty goal, and Shavei Israel is clearly working against the tide of growing acceptance. Chueta and Jew are no longer considered dirty words to ordinary Mallorcans, and several non-Jewish Mallorcans said they would have no problem being friendly with or even marrying Jews. However, Freund added that the existence of even one Chueta who is committed to being Jewish justifies Shavei Israel’s efforts in Mallorca.

“Even if we help one Chueta come back home, we’ve beaten the Inquisition. If we encourage just 10 percent of the Bnei Anusim to re-join the Jewish people we’ll add another 2,000 people to our nation, and these are people who desperately want to be Jewish.

By any measure, they would be an asset to Judaism and to the Jewish People.”

IN MANY WAYS, the synagogue here seems to accurately represent the Mallorcan Jewish community.

Situated on the ground floor of a nondescript building about 200 meters from the beach, the only outward sign that it is a synagogue is the Star of David on the gate, barely visible from the street. Many locals don’t even know if there is a synagogue on Mallorca; even taxi drivers have to be directed to a nearby hotel or given the street address to get passengers here. A simple “take me to the local synagogue” isn’t enough.

Still, the fact that a synagogue operates in the open here at all is no small matter.

For more than 600 years, Jews were forbidden to identify openly or to observe even basic tenets of Judaism. Even after the law was formally changed in the early 1800s to allow Jews to live openly on the island, persecution and Church racism continued unabated for more than 100 additional years, and few Jews were prepared to come out of the proverbial closet and to identify openly as Jews.

Even more than a prayer hall, the synagogue seems to function as an arena in which Chuetas and Bnei Anusim can come together and share the experience of being Jewish. At the seminar, the study material seemed secondary to what the participants seemed to view as the main focus of the weekend: simply coming together as Jews.

The strong sense of camaraderie among members of the community is obvious and immediately apparent, and is expressed in a variety of ways. Although the Friday night Shabbat service was conducted with no minyan because most of the participants were not halachically Jewish, the energy and the unadulterated joy of singing Jewish songs together was of a type rarely found in ordinary Jewish congregations.

After the service, it took nearly two hours to nudge people out of the sanctuary towards the social hall for the dinner proceedings of Kiddush and ceremonial hamotzei blessing over bread.

Later, during the meal, people were asked to go around the room and introduce themselves. In other settings that round of introductions would have taken 10 minutes (there were only 30 people or so). This one took more than an hour and a half as each individual introduced himor herself and included a long explanation about why they’d come to the seminar and what they were hoping to achieve from the weekend.

Significantly, as each person talked the group became more interested, more cohesive, more energetic. Often, over-talkative individuals will eventually lose their audiences, but not here. Furthermore, there was an urgency to their remarks, a strong desire to break free of the heritage of secrecy their ancestors endured. One didn’t have to fully understand Spanish to witness the thirst these people had, partly for knowledge about traditional Judaism but even more to share the absolute joy of being together and being Jewish.

Still, things are changing quickly. The secrecy that defined Jewish life in Mallorca for so many centuries has largely disappeared, leaving young Chuetas with a series of options that were unavailable to their ancestors.

Regina Forteza, a pretty 21-year-old with a bright smile and a Latin demeanor, said she has always known her father was a Chueta (like many crypto- Jews, her mother is not Jewish but believes there are some links to Judaism in her family tree), but she said things have changed even in her lifetime.

“When I was little my grandparents had some ‘weird’ customs, like my grandpa wore a hat around the house but took it off to go outside or when company came over. But those sorts of things are really fading quickly,” she said.

Overall, the new reality is certainly a positive for young Chuetas like Forteza, who is in the third year of a bachelor’s degree in social work at Universidad de Mallorca. But the increased freedom to be Jewish also comes with some identity issues. She said she is anxious to convert to Judaism, and when asked if she would like to marry a Jewish boy, she answered with a broad smile and a hearty “bueno!,” but she also said she dates non-Jewish boys.

Like many Jewish university students around the world, Israel is a point of tension for Forteza and many of her campus friends. On one hand, she considers herself a “cool” Leftist, with liberal views on issues like gay rights. But she also said that Israel has always been a source of pride for her and her family, and that has created some tension with some of her non-Jewish friends who support the Palestinians and are deeply critical of Israel. Some have asked how she could possibly support Israel or want to visit the country next summer.

But Forteza said she is not dissuaded from supporting Israel and from learning more about her background.

“I’m very proud to be a Chueta,” she said. “Think about how strong my family must be. We survived despite it all. If that’s not something to be proud of, I don’t know what is.”