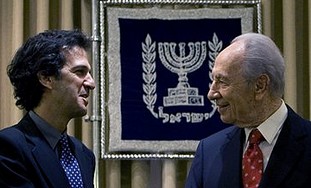 Colombian Foreign Minister Jaime Bermudez, on his first visit to Israel, is keen to broaden bilateral relations at all levels.

He emphasized this several times at a meeting on Wednesday with President Shimon Peres, whom he told that he was reading Start-up Nation: The Story of Israel’s Economic Miracle, by Dan Senor and Saul Singer. He found the book inspirational, and said he was “learning a lot.”

It would be good for Israel and Colombia to come out together with a project for innovation and entrepreneurship, he suggested.

There was instant chemistry between Bermudez and Peres, who commented favorably on the state of both civilian and military relations between the two countries and said that Israel would happily do all that was required to enhance that relationship.

Peres also expressed appreciation for what Colombia is doing in its struggle against terrorism.

Some of the weaponry that Colombia is using in battling terrorism originates from Israel. Over the years, Colombia has bought planes, drones, weapons and intelligence systems from Israel.

Peres asked about Noemi Sanin Posada, who was foreign minister of Colombia from 1991–1994 and served as president of the Comena Housing and Savings Corporation. He was told by Bermudez that she was running third in the polls in the race for the presidency.

Posada, who was the first woman in Latin America to manage a finance corporation, was 30 years old at the time of her appointment. She later served as communications minister, ambassador, then foreign minister, followed by two more ambassadorial postings. She has made two previous unsuccessful bids for the presidency. The election will be held on May 30. Peres described her as “very courageous” and “a wonderful lady.”

Colombia has been compared to Israel by Venezuelan President Hugo Chavez, who, speaking in negative terms, has called the Colombian government “the Israel of Latin America.” There have been severe military and diplomatic tensions between Colombia and Venezuela during the administration of Colombian President Alvaro Uribe.

Under the terms of the Colombian Constitution, Uribe cannot run again, and frontline candidate for president Manuel Santos has committed himself to improving relations between his country and Venezuela.

The once warm and strong diplomatic relations between Israel and Venezuela began to deteriorate in 2006 as a result of the Second Lebanon War. Chavez drew increasingly closer to Iran, and in response to Operation Cast Lead severed diplomatic ties with Israel.

The upshot was that Jews living in Venezuela began to feel uncomfortable and, according to a report published in February by the Agency for Jewish News AJN, about 30 Jewish families are expected to leave Venezuela this year for Colombia, where the general attitude to Jews is much friendlier.

Colombian Ambassador to Israel Isaac Gilinski is Jewish, and one of his predecessors, David de la Rosa, who is also Jewish, now lives here.